The Hungarian Constitution was written to ensure freedom of speech as an absolute right (a right that, as the U.S. Constitution says, cannot be abridged), so all parliamentary attempts to limit this right have failed at the hands of the judges of the Constitutional Court. Parliament sought to constrain what we call "hate speech." There were many instances of verbal abuse of minority groups, Gypsies, Jews, or homosexuals, but the Court deemed them legal expressions of free speech. The Constitution is equally liberal when it comes to establishing parties. According to the constitution "political parties may be freely founded and may act in freedom provided they show respect for the Constitution and the statutes of constitutional law." Therefore for the past twenty years or so far-right parties could be freely established.

Last Saturday, April 18, sixty members of the Hungarian Guard, uniforms and all, demonstrated in front of the German Embassy. The Hungarian Guard a few months ago split into two not quite equal factions. The people who took part in the demonstration belong to the smaller splinter group led by István Dósa. Since the group announced its intention to march and demonstrate to the Budapest police, the sixty guardists received a police escort from the Adam Clark Square at the Chain Bridge all the way to the German Embassy in the Castle District. This splinter group openly calls itself national socialist. Banners saying "Down with the Dogma of the Holocaust" and "The Third Reich Will Fight Back" can be seen on the picture below. 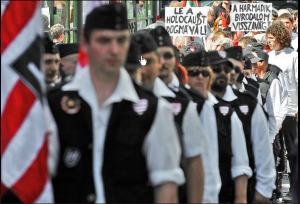 The guardists wanted to hand their "manifesto" to the Germans inside but, not surprisingly, the staff of the embassy refused to take it.

This Dósa-led group seems very active. Just lately they staged several demonstrations together with the Pax Hungarica Movement, also a neo-nazi organization. See http://www.paxhungarica.org/ The demonstration was staged a day before the annual "March of Life" commemorating the victims of the holocaust. Although I didn't spend much time at their web site, there was one thing that was hard to miss. In Hungarian the March of Life is called "Élet menete," but the "peaceful" Hungarian movement corrected it: "Az élősködők [the parasites'] march." A nice bunch of people in brief. Dósa otherwise is looking forward to any possible legal consequence of his action. No wonder that he is so brief: unlike in Germany or Austria holocaust denial is not a crime.

Until now it was mostly MSZP members of parliament who tried to prevent by legal means the spread of hate speech and extreme propaganda against minority groups. SZDSZ in a somewhat doctrinaire manner refused to lend a helping hand to such attempts. The liberal politicians argued that legal restrictions are useless. It is education that will solve the problem. The more enlightened and rational members of society will be able to explain to this minority that they are simply wrong. And they will see the light. I don't want to sound too pessimistic, but I'm afraid that the Hungarian liberals are naive. I suspect that none of them ever sat down with a Hungarian "national socialist" and tried to have a rational dialogue. Just today two people, one a leader of Jobbik and the other a MIÉP sympathizer, phoned in to György Bolgár's show and, although Bolgár tried his darndest to convince them of their mistaken ways, his callers didn't budge an inch from their earlier position.

It seems that the activity of these sixty guardists was too much even for SZDSZ. First of all, some of their leaders called Jobbik, the party that brought the Hungarian Guard to life, a neo-nazi organization. Also, they would now like to introduce legislation that would make denial of the holocaust a crime. On Monday several parliamentary members (MSZP and SZDSZ) demanded a change in the constitution. Fidesz offered a different agenda: a parliamentary committee to investigate the role of the police. Why the police didn't stop the demonstration, a demonstration that as far as I can see was perfectly legal, however abhorrent.

Jobbik's reaction was interesting. One of the vice presidents of the party explained to Bolgár today that this Hungarian Guard is not their Hungarian Guard. They are in no way responsible for what Dósa's Hungarian Guard does. (Mind you, outwardly one cannot distinguish between the two groups: same uniform, same everything.) Moreover, Jobbik will sue every politician who called Jobbik a nazi party. I have already counted at least three such politicians: Gábor Fodor (SZDSZ), Péter Gusztos (SZDSZ), and Ildikó Lendvai (MSZP). As she put it: "A nazi is a nazi and shame is shame." Jobbik is not a right radical party but a nazi party. One ought to mention that Jobbik is doing quite well according to the polls. If elections were held today, Jobbik most likely would have parliamentary representation. It is also possible that Jobbik will be able to send a person to the European Parliament, the unspeakable Krisztina Morvai. On the other hand, SZDSZ, representing the liberals who call Jobbik a nazi party, has very little support. As things now stand it's unlikely that the party will be represented in either the European or the Hungarian Parliament.

György Bolgár was asked by the Jobbik representative what he considers to be characteristics of the nazi ideology. Bolgár listed a few: racism, homophobia, chauvinism, xenophobia, militarism. Jobbik doesn't think that any of these characteristics apply to their beliefs. Racism? Oh no, they simply talk about "gypsy crime." Homophobia? Oh no, they just think that it is a sick minority whose freedom should be limited. Chauvinism?  Oh no, they are simply patriotic and want to defend the country. Xenophobia? Oh no, they just want to defend the Hungarians against foreigners. Militarism? Oh no, they would like a conscript army where Hungarian youngsters would receive a "patriotic education."

Meanwhile, Gusztos and Fodor keep repeating that it would be an awful shame if the third largest party in Hungary were neo-nazi. I guess this is an appeal to the former liberal voters who turned their backs on SZDSZ to think before they vote.