Its being Monday, at first I thought that I would skip writing today, but then I saw a picture of the huge crowd that took part in Sunday’s March for Life (Az Élet Menete) commemorating the Holocaust. Even before I read the article describing the event my first thought was that it was really remarkable that this commemoration managed to attract several thousand people while all other demonstrations organized lately by left-liberals were very small. Only a few hundred people took the trouble to raise their voices against intolerance and the visible growth of the far right. And behold, here is this huge crowd. Maybe it means that in the future we will see more vigorous political participation on the part of the left.

The march was obviously more than a commemoration of the Holocaust. It was also a demonstration against the growing Hungarian Nazi movement. Because, let’s face it, it is a Nazi movement although in Hungary most people don’t dare to label it as such. When I wrote an article in Hungarian about the international reaction to Jobbik and mentioned that foreign commentators call them fascists, my editor wrote back expressing her hope that I could footnote that claim because otherwise Jobbik will sue the paper.

This is the eighteenth time that the march has taken place. In the first year only 400-500 people bothered to gather to commemorate the death of about 400,000 Hungarians in 1944-45. Last year there were more than 10,000 participants and this year their number might have been over 20,000. Among the marchers were several socialist and Fidesz politicians, including Péter Kiss, Ildikó Lendvai, Attila Mesterházy, Katalin Lévai, Ferenc Gyurcsány with his family, Antal Rogán (Fidesz mayor of the fifth district), Zoltán Balog (former chairman of the parliamentary committee on human rights), Gábor Kuncze (former chairman of SZDSZ), and Gábor Iványi, a well known Methodist minister. Apparently several members of the diplomatic corps also took part. I definitely saw the U.S. ambassador.

The march began in St. Stephen Park in District XIII and the crowd completely filled the New Pest section of the bank of the Danube. 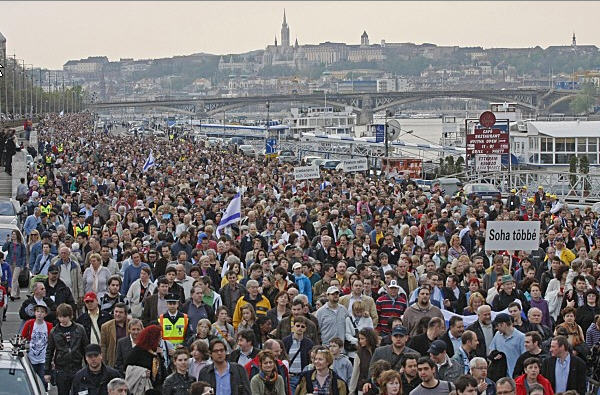 Although there were several speeches the most interesting was the one given by Sándor Németh, head of the Hungarian chapter of the Assembly of God. This church is a very curious phenomenon. One would think that it would be politically conservative, but the Hungarian fundamentalists are a liberally minded lot and the church has long been associated with the liberal party. For instance, ATV, a liberal television station, is owned by the church.

Most commentators noted approvingly that Sándor Németh at last didn’t mince words and called Jobbik what it is, a neo-Nazi party. It is the shame of Hungary, he continued, that members of this party will be sitting in the Hungarian parliament. And, yes, the Jobbik parliamentary members will be sitting in the very same chamber where the laws against the Jews were enacted in the late thirties and early forties.

To finish this short piece on an upbeat note: I consider this very large demonstration a clear sign that the until now not very active left-liberal voters of Hungary will not be taking any anti-democratic shift in Hungarian politics lying down.