I’ll bet not too many people know who József Budenz (1836-1892) was. So here’s a brief introduction. He was a German-born linguist who received his degrees in Marburg and Göttingen but moved to Hungary, learned Hungarian, and changed his name to Budenz József. He is the man who established once and for all that the Hungarian language belongs to the Finno-Ugric family. 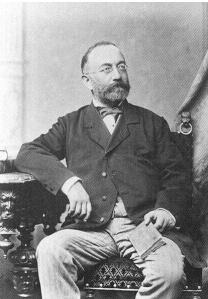 Why was Budenz evil? Of course, he wasn’t. He was a hard-working, talented linguist who proved beyond any reasonable doubt that although there are many Turkish words in Hungarian, the origins of the language go back to a period when the Finns, Estonians and some other Finno-Ugric tribes lived side by side far away from the Turkic populated areas.

I borrowed the title of this post from Ádám Nádasdy, a contemporary linguist who is one of the best speakers I have ever had the privilege to listen to. Anyone who knows Hungarian should visit the site of Mindentudás Egyeteme (University of All Knowledge), a series of popular public lectures, in which Nádasdy gave a very entertaining talk, “Miért változik a nyelv?” (Why does language change?) Nádasdy in a recent Élet és Irodalom piece tried to explain how Budenz came to his conclusion even though initially he was inclined toward the Turkic origin of Hungarian.

I suspect that Nádasdy wrote this piece because he is exasperated by the growth of unscientific explanations that not only question but outright deny the relationship between Finnish and Hungarian. Nádasdy gave a lecture to a group of Hungarian teachers about linguistics and one of them stated that the whole Finno-Ugric theory was without any foundation because Budenz was German and thus a hired agent of the Habsburgs who wanted to belittle Hungarians with such lowly relations. For a long time, continued the Hungarian teacher who is teaching the next generation, Hungarians had to endure all this but now that the country is at last free, it’s time to tell the truth.

If one googles “Budenz” many bogus linguistic studies will come up that try to prove Budenz wrong. One fellow hopes that his son will continue his work and adds: “May Isten, the God of the Magyars, grant him wisdom.” Another one talks about Budenz’s work as “unsubstantiated nonsense.” I might add that none of these people is a trained linguist.

So, let’s see how Budenz arrived at his theory. In Budenz’s time linguistics became a very exciting discipline after the discovery and application of the “historical comparative” method. When Budenz started his work on Hungarian the origin of the language was not yet decided. There were two possibilities: either Turkic or Finno-Ugric because these two elements are the strongest in the oldest layer of the Hungarian vocabulary. The word “ész” (reason, mind, intelligence) is Turkic while  “agy” (brain) is Finno-Ugric. “Tyúk” (hen) is Turkic and “hal” (fish) is Finno-Ugric. “Szék” (chair) is Turkic while “ágy” (bed) is Finno-Ugric in origin. Even from these few examples we can gather that Finno-Ugric is the older layer because it represents an earlier, less sophisticated mode of living. First came the fishing and gathering phase and only later agriculture and husbandry. Bed is more fundamental than chair.

The other way to look at the question is simply by using our common sense. If Hungarian is a Turkic language how on earth did all these Finno-Ugric words get into the vocabulary? The Turkic people were stronger, richer, and more developed than the Finno-Ugric tribes. Why would a more civilized group of people borrow all these words from the fishermen of the Finns and Ugors? As Nádasdy, who by the way is a very funny guy, says, “Why on earth would this sophisticated bunch decide to learn so many words from people who just left the forest and looked at the hens, the chair, and the written word in amazement?” In brief, if the language was originally Finno-Ugric, then it is understandable why they picked up so many Turkic words that were the product of a higher civilization and hitherto unknown to them.

Nádasdy goes into some comparative linguistics and gives examples from languages that all came from Latin. There the relation between certain words is obvious just by looking at them. For example, the word for mountain in Italian, Romanian, French and even English via French. But sometimes the connection is not so obvious, like the Portuguese “cheio” and the Romanian “plin.” Yet, once we know certain rules it can easily be explained how both of these words come from the Latin “plenum” (full). Here I’m not going to tell the whole story, but the upshot is that sounds in the original changed according to one set of rules in one language and a different set in another.

Budenz could prove the Finnish-Hungarian linguistic relationship this way as well. And here I am going to give the details. Nádasdy gives the example of the word “ég” (sky) which in Finnish is “sää” and in Komi “syn.” In proto Finno-Ugric it was most likely “sänke.” How do we know that? From Hungarian, because Hungarians dropped the initial -s in Finno-Ugric and -nk became -g. Here are a couple of other examples: Finnish “tunkea” became “dug” (stick) in Hungarian. Finnish “hanka” became “ág” (branch) in Hungarian. And this is a linguistic rule that knows no exception.

As for Budenz as agent Nádasdy comes up with a funny comparison. Budenz was as much a scientist as Galileo was. Would anyone think that Galileo was a Turkish agent who was hired to undermine the teaching and power of the Catholic Church? It is unlikely. The same is true about Budenz. People must understand that historical-comparative linguistics is a science. Even if he had been an agent–which of course he wasn’t–the rule that the Finno-Ugric -nk becomes -g in Hungarian is a scientific fact.