One could predict that sooner or later there would be trouble with one or more of the Jobbik members of parliament. The party is very proud of the performance of its delegation, especially considering that very few of them had any previous political experience. I watched a few speeches by Jobbik delegates and was less impressed than perhaps Gábor Vona and his lieutenants are. Előd Novák (born in 1980) has been very involved with politics ever since his high school days, and therefore one would think that he would be able to deliver a cogent speech. But his speeches are long, tedious, and not always comprehensible. Tamás Gaudi-Nagy, a lawyer, has no problems with words. In fact, he talks too much. I read somewhere that he talked the most of all the members of parliament in the past session. And then there is György Gyula Zagyva.

What an unfortunate name. “Zagyva” means “confused,” “muddled,” “incoherent,” or “nonsensical.” Well, he is all of that. People who spend some time listening to his speeches on YouTube will soon discover that this fellow has serious problems expressing himself. 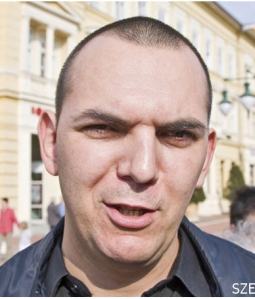 However, that doesn’t prevent him from parading as a “newspaperman” and “radio personality.” Mind you, his “writings” appear in a right radical publication called Magyar Jelen (Hungarian present) and his radio station is Szentkorona Rádió (Radio of the Holy Crown). (That someone gave a frequency to this so-called radio station is the real shame!)

The first problem with Zagyva is that he is totally uneducated. He finished trade school and became an electrician, but his education ended right there. Politically he started as a skinhead and continued in István Csurka’s MIÉP, a radical, antisemitic party that managed to have enough votes in 1998 to be represented in parliament but which since 2002 has lost most of its supporters. He was also involved in a “youth movement” called the Movement of the Sixty-Four Counties (the number of counties in Greater Hungary) which as its  name implies lays claim to the Hungary of old. He got into some trouble a couple of years ago in Serbia where he and his friends went to stir up trouble. The Serb authorities moved swiftly. They expelled him and he was forbidden to cross the Serbian border for two years. He is crude guy who early in the new parliamentary session delivered a short speech at the end of which he showed a Fidesz member the finger and called him out to the corridor to settle accounts. He got into some trouble over that one.

And then there is the latest incident, which has everybody up in arms. Zagyva is one of the organizers of the “Hungarian Island” festival. It is supposed to be a counterpoint to the well known Pepsi Island Festival in Budapest (a kind of Hungarian Woodstock). With the growth of the Hungarian radical right Hungarian Island became a fairly large gathering of the various national radical movements.

This year two enterprising journalists of the liberal weekly Hetek (Weeks), a magazine of a fundamentalist Christian church, got in touch with the organizers and asked whether they could attend the festival. They were told that they could if they bought tickets. However, they were escorted by a “guide” who pointed out what they could photograph and what not. Meanwhile, there was a lecture going on by a certain László Tompó who, according to his own writings, is the “Jewish expert” of the radical right. It is not immaterial that he is working for Szentkorona Rádió. He was delivering a harangue against the Jews, including such nonsense as that the Hebrew language has no word for “love” or “science.”

The journalists wanted to interview Tompó but they were refused. Instead they were offered an interview with György Gyula Zagyva, our infamous member of parliament. The interview took place in a hut where Zagyva was reclining on a bed holding a horse whip which he kept swinging while he was talking. The journalists were told that they “should be glad” that he didn’t beat them up. He made it clear that the journalists were on enemy territory where “democracy ends.” He used some very obscene language which I don’t want to repeat here, but one can find the exact words at Terror on the “Hungarian Island.” Zagyva further told them stories about what he did to reporters of TV2, a well known television station in Hungary. He talked about another journalist from Index (an internet website) “who lost a tooth after he dared to talk back.” Perhaps he was fibbing, but because of Zagyva’s aggressive talk and his whip the journalists started to feel very uncomfortable.

Without going into the gruesome details, it was a pretty awful scene lasting about forty-five minutes during which Zagyva and his friends insulted the journalists and threatened to kill the editor-in-chief of Hetek. Finally, they were let go, but their guide made sure that they understood that “they would beat the shit out of [the journalists] if they had recorded anything that was said in the hut.”

Not surprisingly Zagyva denies everything. According to him “the real facts and events were distorted,” making it look as if he actually threatened the journalists. On Monday Jobbik’s top brass will look into the affair. MSZP asked Tibor Navracsics, deputy prime minister in charge of justice, and Sándor Pintér, minister of interior, to investigate not just this affair but also the festival itself to find out what kind of extremist propaganda is being promulgated there. Jobbik is outraged by the request because, according to the party spokesman, the Hungarian Island festival has been in existence for ten years without any incidents. But perhaps no liberal journalists tried to attend the festivities earlier.