The Orbán government’s first dabbling in art ended in ridicule. That was during the first “reign” of Viktor Orbán. His much admired “historian,” István Nemeskürty, apparently ordered a very large canvas depicting the members of the Orbán-Torgyán government together with important symbols of that period. At the end the government refused to pay for it. One ought to take a second look at this “masterpiece” to appreciate the second attempt of Viktor Orbán and his friends to make themselves immortal. 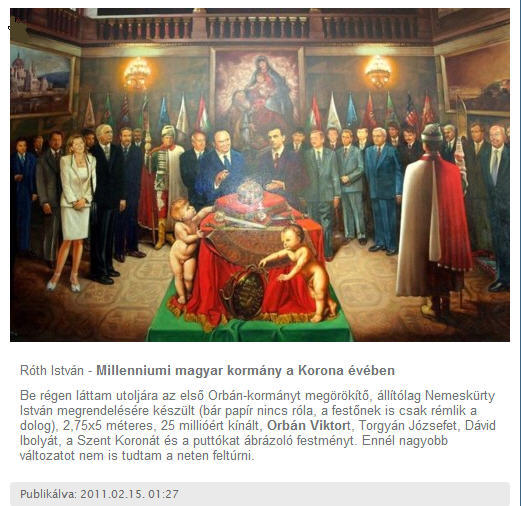 Well, one laughing stock wasn’t enough. Ten years later, the second Orbán government ordered fifteen new “masterpieces” to the tune of 1.6 million forints apiece to illustrate the history of Hungary between 1867, the date of the Compromise, and today. At present they are being kept in the National Széchenyi Library protected by armed guards. I don’t think that anyone would like to steal them. Maybe the government is afraid of defacement. I am reproducing fourteen of the pictures, the ones already available. I put them in chronological order and added the names of the artists and the subject of the canvases. I am refraining from commenting on the artistic merits of the pictures. After all, I’m no art historian but I will say a few words about their historical background. 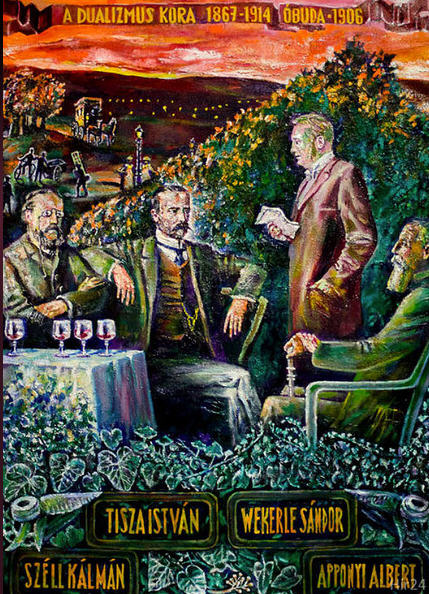 Gábor Szine: The Age of Dualism

Four politicians are having a get-together in the pub in Óbuda. Why these four? I guess because their birth and death dates made it possible for them to be found together in 1906. 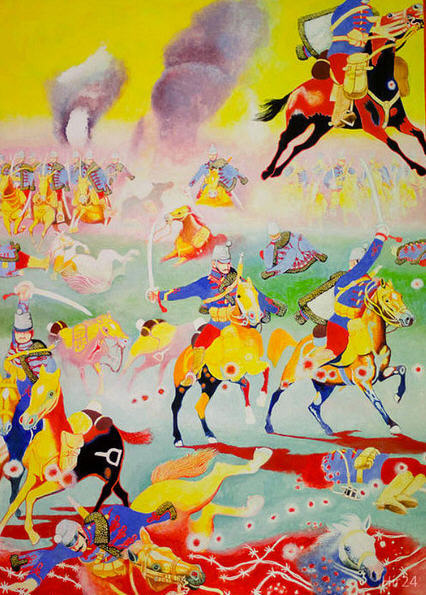 What a happy little war with all those hussars and prancing horses. 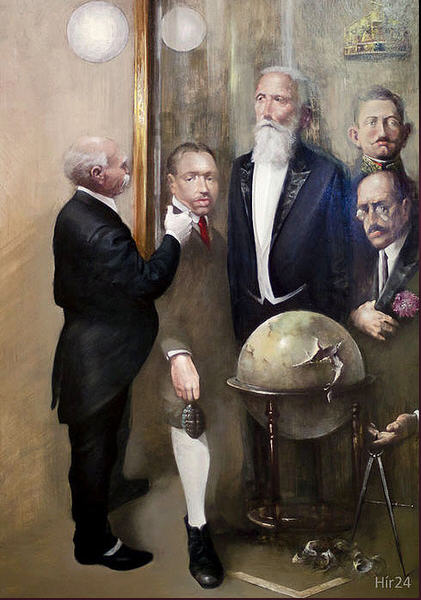 This needs a little explanation. Albert Apponyi is certainly a favorite since he already appeared in the painting depicting the age of dualism. In addition we can see Mihály Károlyi, George Clemenceau, King Charles IV, and, I guess, Edvard Beneš, prime minister of Czechoslovakia.

The white horse made it after all. 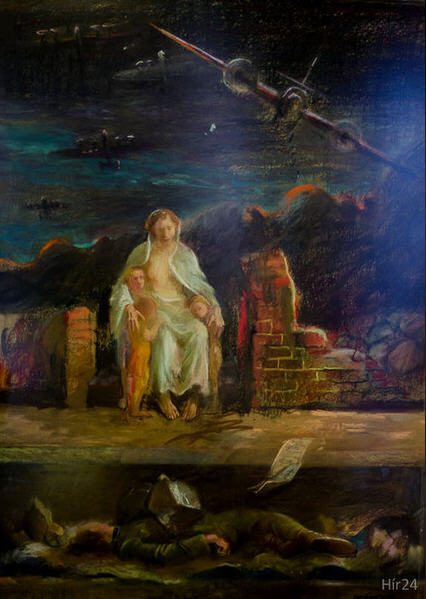 This is appropriately tragic looking, whatever else you think of it. 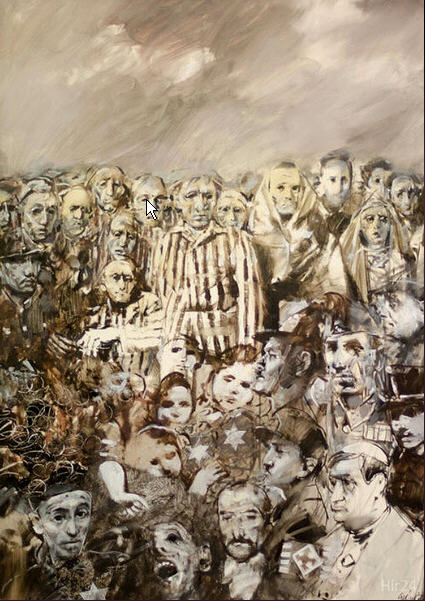 At least this painting  has some artistic merit. 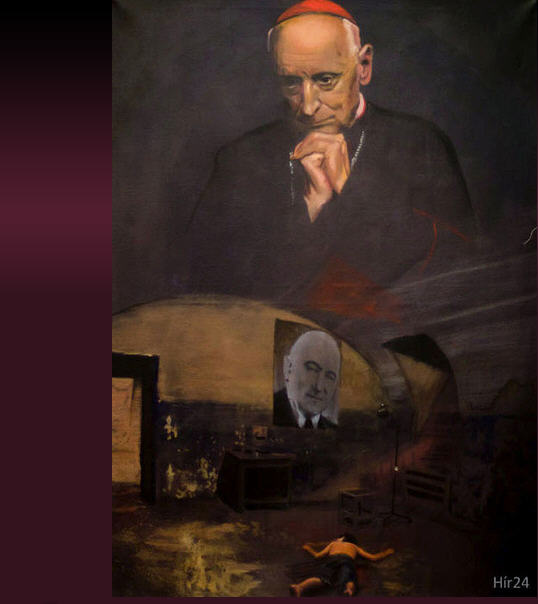 Here the most important person seems to be József Mindszenty. An interesting choice. 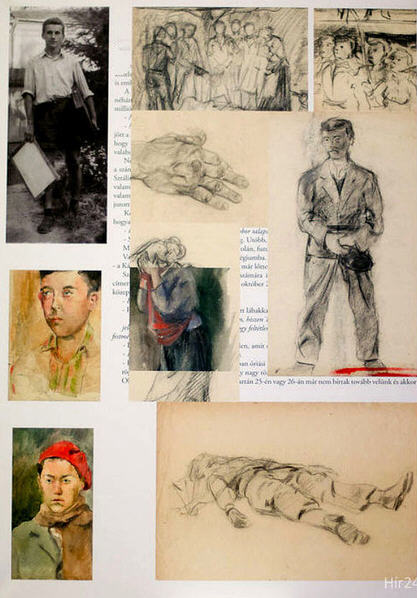 The Kádár regime didn’t make it. Considering that it lasted for thirty-four years, longer than the Horthy regime, the omission is interesting. 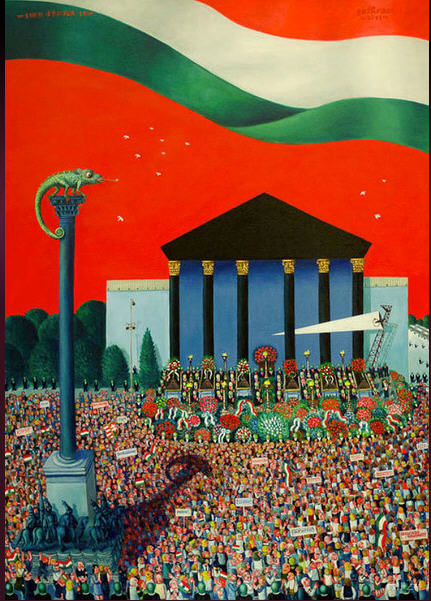 According to some eagle-eyed person Viktor Orbán is there in spite of the fact that Anikó Lévai, Orbán’s wife, apparently told Imre Kerényi, a theater director and the man who came up with the idea of commissioning the fifteen paintings, that she would kill him if her husband’s picture appears on any of the paintings. At least there is one person in this bunch who has some sense. 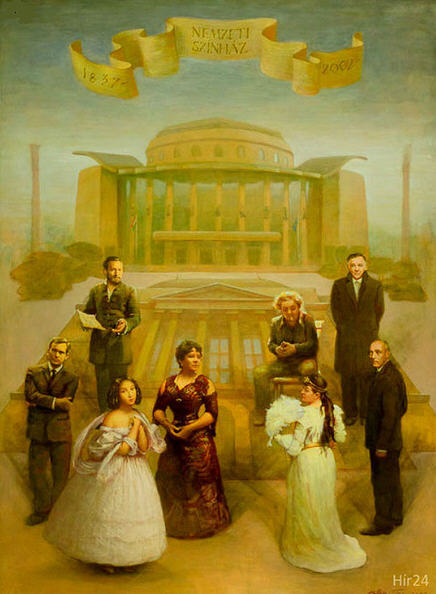 At first I was somewhat baffled because Hungary’s National Theater has been in existence ever since the 1840s but then I caught on. It seems that the greatest achievement of the first Orbán government was that hideous new building that opened its doors in 2001. 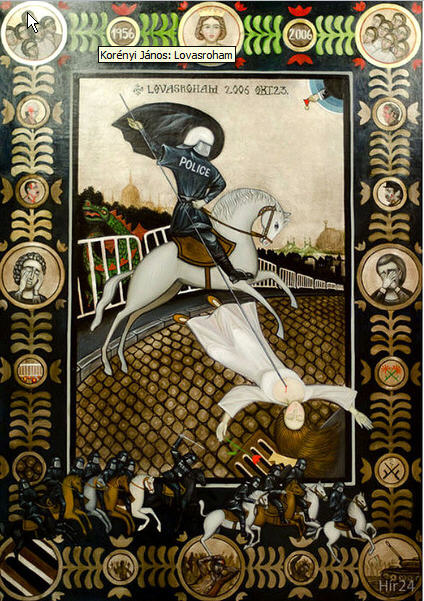 The most controversial picture. An interesting twist. The policeman is killing an angel in October 2006. Sure, all those angels who set fire to cars and garbage cans and who were throwing rocks at the policemen. 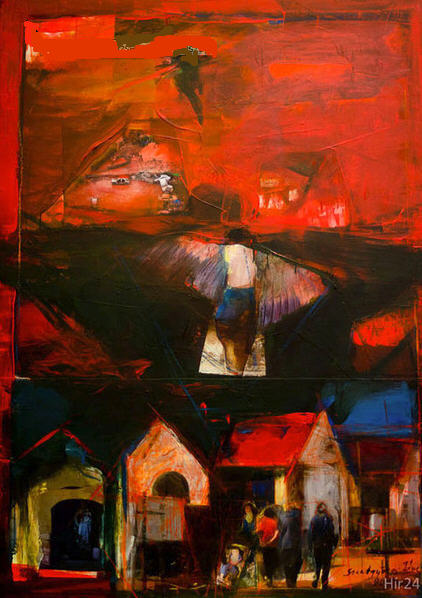 Surely, a critical event of the century. 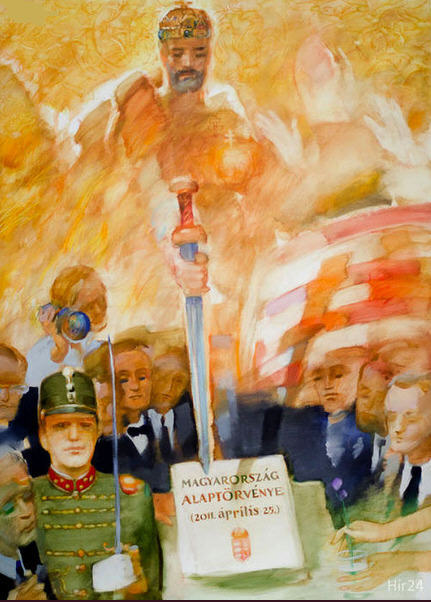 Saint Stephen is looking on approvingly.

The granddaughter of Imre Nagy called the whole series “the absurd of the absurd.” And she is an artist herself.

Those of you who know Hungarian mustn’t miss this interview with Imre Kerényi who commissioned the pictures. I don’t think that one can encounter a less sympathetic character too often. http://atv.hu/videotar/20111108_tizenot_rendelt_festmeny