A friend of mine who lives in Hungary wrote a very pessimistic letter immediately after Viktor Orbán’s February 7 speech on the state of the nation. She is not a fan of Orbán and so I didn’t expect to hear anything positive about the speech. And indeed, she disliked the speech almost as thoroughly as she dislikes the current Hungarian regime.

By contrast, we know that the invited guests loved Orbán’s address. It was enough to listen to the members of the crowd leaving the building. When asked how last year treated them, they expressed their total satisfaction with their lives in 2011.

I haven’t read anything about how many people watched Orbán’s speech and haven’t seen any quick poll on how the population as a whole responded to it. Most likely Fidesz sympathizers found Viktor Orbán convincing and welcomed the bright future the prime minister outlined while those who are his political opponents found his words empty political slogans. The undecided probably watched something more entertaining on cable.

This same friend of mine who disliked Orbán’s speech was especially outraged at Gábor Török’s analysis of the prime minister’s address on Olga Kálmán’s Egyenes beszéd. Gábor Török is a “political scientist” who notoriously avoids straight answers. She asked me whether I heard him. According to her, Török, who was always very critical when it came to Ferenc Gyurcsány’s “lies,” “found every excuse to defend all the untrue statements of this populist politician.”

Yes, I saw the interview twice and eventually I began to understand why most of these so-called “political scientists” are untrustworthy. If one listened carefully to the conversation between Török and Kálmán, it became clear that Török wasn’t looking at the speech from the outside but from the inside. Almost as if he had been the speech writer of Viktor Orbán. In his opinion, it was “an excellent speech from Viktor Orbán’s point of view.” Under the circumstances the best he could come up with. It was a well constructed “narrative.” It was logical and believable for those who are not antagonistic toward the present government.

But is it the job of a “political scientist” to analyze a politician’s speech from the point of view of the speaker? Or from the point of view of the party he leads? I doubt it. One hopes that Török is not a member of the Fidesz brain trust or one of Orbán’s speech writers who after putting the final touches on the prime minister’s address can lean back with satisfaction:  “job well done!” That would be a misunderstanding of a political analyst’s job.

Török behaves less like a political commentator and more like a spin doctor who tries to explain away his employer’s rough edges. 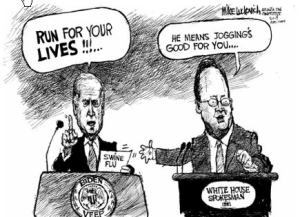 Török tried something like the White House spokesman is doing in this cartoon, though his efforts were not nearly so funny.

Török claimed that the speech was designed to bridge the gap between the confrontational policy of yesterday and the policy of accommodation of tomorrow. Therefore, he maintained, the speech, insofar as Orbán addressed his past actions, was not without self-criticism. In reality, there was only one sentence that could be construed as self-critical: when Orbán described the extra levies on banks and selected companies as “not very elegant.” But he immediately added that it had to be done.

As for the couple of jibes against the European Union, admittedly Orbán lowered the volume somewhat. This time around Brussels wasn’t compared to Moscow. However, he blamed Europe for intoxicating the Hungarians who then think that they can achieve great things, but in the last moment the old continent thwarts the people’s dreams. If this is preparation for a policy of accommodation with the European Union it is certainly a very oblique one. Another jibe at Europe was his reference to the Europeans’ “circuitous worries” about, I assume, the state of Hungarian democracy. Török didn’t linger over these negative references to Europe and didn’t feel the need to explain how these sentences fit into the alleged change of policy of the Orbán government.

Do we need a quasi spin doctor to explain the inner workings of the politician’s mind as they are manifested in a speech? I don’t think so. Let them remain the secret of the prime minister and the brain trust that surrounds him.