Saturday I was thinking of writing an article on the literary merits of those three or four writers who are being “rediscovered” of late by the “rightist, nationalist, and Christian” government of Viktor Orbán. The adjectives are not mine. Orbán himself described his ideology and government in these terms. But then I would have had to rely on the opinions of others to a large extent.

I read Cécile Tormay at the time that I was writing my dissertation on the 1919-1921 period of Hungarian history, but I viewed her so-called “diary-novel” Bujdosó könyv (1920-21) more as a historical than a literary document. Even as a historical document, however, it must be regarded with serious reservations because, although written in diary form, it wasn’t a contemporaneous account of the events described. It reflects a conservative point of view with plenty of anti-Semitism in the mix. Anyone who’s interested in taking a look at it can do so here.

I read Dezső Szabó’s two-volume autobiography Életeim (My Lives), which was reprinted in 1965, and found his prose pretty impenetrable. In 1957 his best short novel Feltámadás Makucskán (Resurrection in Makucska), which I did not read, was reissued. In contrast to my reaction, I just heard a literary historian claim that as an essayist Szabó was one of the Hungarian greats. In fact, the historian considered him the equal of Endre Ady.

As for the literary merit of the two most controversial writers of this literary revival I really cannot pass judgment because I read neither József Nyirő nor Albert Wass. Therefore, I was pleased to read an article by Júlia Lévai, one of the founding members of Galamus, on Nyirő. She took the trouble to read a number of Nyirő’s short stories in a volume entitled Fagyöngy (Mistletoe, 1937). I must say I haven’t had so much fun in the longest time.

Lévai begins by saying that she is not a literary historian. In fact, her background is in music. So she approached these stories as an ordinary reader of Hungarian prose.  First, she noticed some of Nyirő’s mannerisms. For instance, every verb must have an adverb. Someone not only “keeps vigil” but “broodingly keeps vigil.” Nyirő is fixated with darkness. Someone looks over to a child “darkly.” People of the wilderness in general are “dark” or “burned poor” or perhaps “frozen black.” One of his heroes speaks darkly, sees darkly, darkly moves in the snow, and even thinks darkly. Another Nyirő hero can even “sit darkly.” 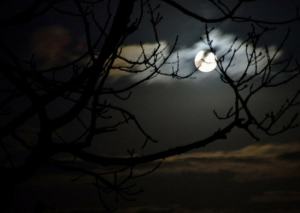 Nyirő also uses words in unusual ways. Almost as if he weren’t quite aware of their meaning. Lévai found a short story entitled “Vihar” (Storm) in which Nyirő discusses the relationship of God and man on this earth. The man in the story is angry at God because his hay-wagon tipped over and he angrily “shook up his pitchfork toward the sky.” This expression is odd even in English but in Hungarian it is really strange. One usually shakes up a pillow (felrázni a párnát).

Lévai picked a few examples from a large warehouse of Nyirő’s descriptions of animals. “The mother-bear folds the hands of her little ones, saying ‘Pray nicely for God to turn his wrath away from us.'” The same mother-bear “darkly pants.” Another “mother-bear trembling cries to the dreary world: My Lord, have mercy on us! Her little ones nestle to her groan: Have mercy on us! Father-bear waves his hand in resignation and sinks his head down as if he were thinking about his last will.” Moving on to wolves, “The wolf is turning grey from the horror and in his rage he snarls.” Perhaps my favorite: “The fish are now mute and cold because of fright.” (Lévai adds: “As if they were warm and talkative otherwise!”)

Nature also behaves oddly in Nyirő’s work. For example, “The rocks began to wail.” Or “Only the rocks believe in themselves.” Or, “The storm’s last burst of fury has become even more horrific and once more knocked the heads of mountains together.”

And, as Lévai describes it, the icing on the cake. This time about a bird: “It is distressing to see how the warbler is running around tearing her hair out and is looking around the bushes while she is screaming half mad: Did you see my children?”

Lévai makes some not too flattering comparisons between the half-mad warbler and “half-mad politicians running around with Nyirő’s ashes.”

Meanwhile, on behalf of a writer whose prose doesn’t sound exactly sterling and whose political views are at best questionable the Hungarian government is risking a serious diplomatic breach with Romania. Victor Ponta, the new Romanian prime minister, is not in a joking mood and demands an apology from Viktor Orbán himself for László Kövér’s disparaging remarks about the Romanian government. I think Ponta can wait till doomsday. His namesake is not the kind who apologizes. And indeed, Orbán’s spokesman, Péter Szijjártó, made it clear that no such apology would be forthcoming.