I will share two letters with you this time. One was written by fifty members of the U.S. Congress to Prime Minister Viktor Orbán. The letter in my opinion doesn’t properly underscore Fidesz’s and the Hungarian government’s share of blame for the spread of anti-Semitism and anti-gay sentiments in Hungary. The letter concentrates only on Jobbik when the real situation is that Fidesz and the government are just as responsible for the current state of affairs as Jobbik. Perhaps even more so. 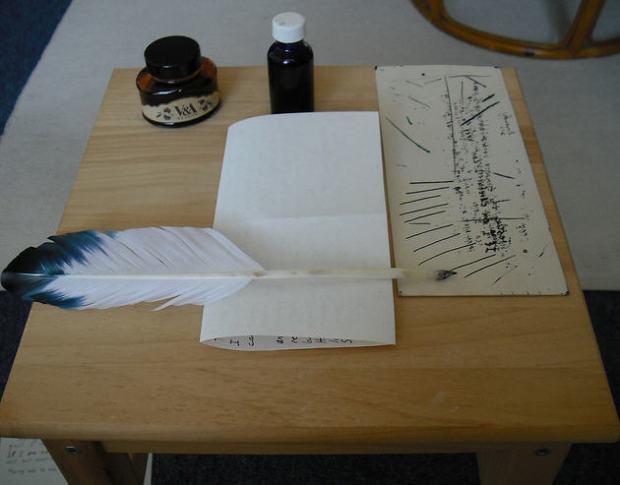 The letter specifically mentions Jobbik’s “calling for the ouster of Robert Alfoldi, the director of the National Theater, based on his presumed homosexuality.” Yes, this is the case, but what the U.S. Congressmen don’t address is that the new Fidesz undersecretary for cultural affairs, László L. Simon, already announced that Alföldi’s reappointment was unlikely. Never mind that the appointments are determined by an “independent” jury based on the candidates’ proposals and that Alföldi already announced his intention to reapply. Fidesz is a willing partner of Jobbik.

Someone suggested that the Congressmen cannot go any farther than the official U.S. policy prescribed by the State Department. But I would like to call attention once again to what U.S. Special Envoy to Monitor and Combat Anti-Semitism Hannah Rosenthal had to say on the topic: “The recent rehabilitation of figures from Hungary’s past who are tainted by their support for Fascism and anti-Semitism contributes to a climate of acceptance of extremist ideology in which racism, anti-Semitism, and other forms of intolerance can thrive.” And Rosenthal is an employee of the U.S. Department of State.

Here is a facsimile of the “letter of the fifty” as it became known in Hungary: 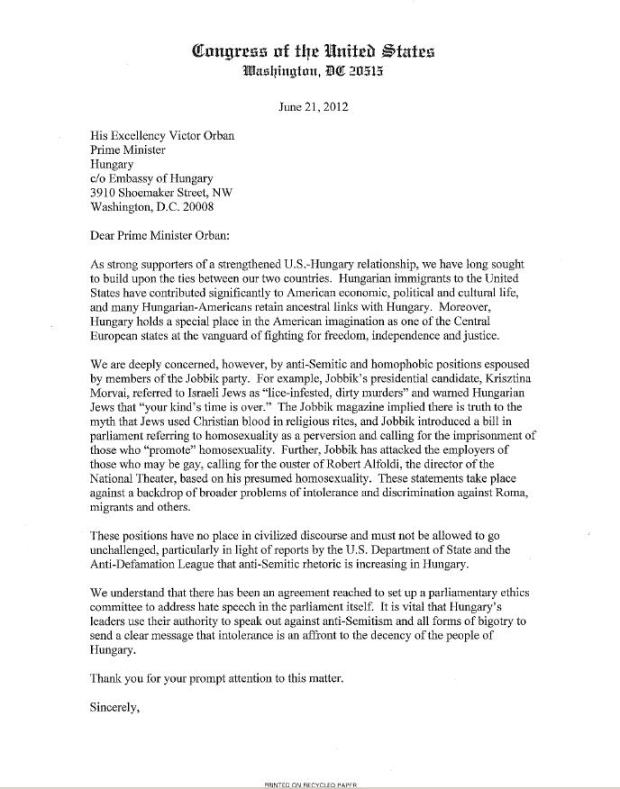 And finally, here is a letter written by Attila Mesterházy to Viktor Orbán.

Hungary is going through a serious moral crisis that was created by the government and the governing parties by their efforts to minimize the gravity of the historic crimes of the Horthy period and by their attempt to rehabilitate Miklós Horthy and his supporters who shared his ideology.

It is in this context that one must place László Kövér’s zealous effort to make József Nyirő’s reburial possible.  By making this funereal act a political event the organizers are not only recalling the memory of an anti-Semitic author who openly declared his adherence to a fascist ideology but are also reviving the political creed of a politician who enthusiastically and faithfully served Nazi Germany and the Szálasi regime to the bitter end.

The government does the same when it makes the works of writers with right extremist views compulsory readings in schools.

It is also shameful that the government parties in spite of domestic and international  scandals intend to erect a statue for Ottokár Prohászka on publicly owned land. Until now the judgment on Ottokár Prohászka has been unambiguous: he was a Catholic bishop who as a chief ideologist and politician of the Horthy period stirred up hatred against Jewish citizens of the country. He   most vociferously demanded the numerus clausus. The anti-Semitism of Prohászka is a fact. It cannot be the topic of debate.

By now every honest democrat is watching these developments with righteous indignation while the relatives of the former victims and the survivors of the Holocaust are looking on with fear and trepidation not only in Hungary but all over the world.

Nobel Peace Prize winning writer Elie Wiesel’s letter to László Kövér was a warning sign in which he declared that “it has become increasingly clear that the Hungarian authorities are encouraging the whitewashing of tragic and criminal episodes in Hungary’s past, namely the wartime Hungarian governments’ involvement in the deportation and murder of hundreds of thousands of its Jewish citizens.” As a result Elie Wiesel repudiated the Grand Cross Order of Merit of the Republic of Hungary given to him in 2004.

Another serious warning is the letter of protest written to you by fifty member of the U.S. Congress in which the undersigned expressed their concern over the growth of hate speech and the spread of anti-Semitic and homophobic sentiments. At the same time they made it clear that such pronoucements have no place in civilized discourse and cannot remain unanswered.

The Hungarian Socialist Party, the Hungarian democratic opposition, every democrat at home and all over the world most categorically condemn these developments, but only you can stop them.

Therefore, more emphatically than ever before, I call on you as chairman of the association of the two governing parties and as the prime minister of the country to  unambiguously declare your condemnation of  attempts to spread views of hatred and the revival of anti-Semitism.

I suggest to you that such a committee be set up and I expect you personally to support this suggestion.

I’m also calling on you to prevent the erection of the planned statue of Ottokár Prohászka, thereby avoiding a domestic and international  outcry and the destruction of our country’s reputation and honor.

All this is not a historical, not a cultural, not even a political issue but a human obligation.

You, as the prime minister of Hungary, bear a special reponsibility for making sure that no one is being discriminated against, that nobody would have to suffer verbal or physical abuse because of his or her origin or sexual orientation or any other reason.

We as citizens of Hungary expect that you at last would actually meet this obligation!

I am looking forward to your answer.

Chairman of the Hungarian Socialist Party

Although László Kövér’s answer to Elie Wiesel “was long and very cordial,” when it came to the essence of things Kövér tried to convince Wiesel that József Nyirő was neither a fascist nor an anti-Semite. Wiesel, not surprisingly, didn’t find Kövér’s answer satisfactory. Wiesel especially found his explanations for the revival of a Horthy cult unsatisfactory. The full letter will be released on Monday.

I expect that Viktor Orbán will send a similar answer to the Congressmen. As for Mesterházy’s letter, it is possible that Orbán will not even bother to answer him.