About a week ago Viktor Orbán announced that he will be taking a two-week holiday because his “batteries were exhausted.” He will spend time with his family in Felcsút and perhaps at Lake Balaton. I’m sure that a lot of people received this announcement with a certain amount of relief because lately the Hungarian prime minister has been delivering speeches that made not the slightest sense. Perhaps these people thought that a two-week rest would have a beneficial effect on Orbán’s nerves and senses.

However, no such luck. He changed his mind and instead of taking a vacation he began a tour, meeting important segments of society. Now, don’t think that these include groups who don’t necessarily agree with him. No, he has pleasant exchanges, perhaps several daily, with his followers. The speeches he has made at these encounters are perhaps even more outrageous than his earlier ones. It was during one of these meetings, this time with the leading lights of Hungarian capitalism, that he announced that at least fifty percent of the banking sector must be in Hungarian hands. I don’t think that I have to elaborate on the nonsensical nature of this particular announcement given the lack of capital in Hungary. It was also during one of these fruitful talks that he announced that public utilities companies in the future should operate on a non-profit basis. Again, I don’t think that one has to dwell on the impossibility of such a scheme–unless, of course, these companies are nationalized, in which case they would probably operate at a loss.

Well, yesterday Orbán met with the leaders of Fidelitas, the youth organization of Fidesz. Most of these people, for example Péter Ágh (1982-), the chairman of Fidelitas, also have high positions either in the Fidesz parliamentary caucus or in the government. So, the prime minister didn’t have to worry too much about adverse reactions to his ideas on higher education.

Let’s get to perhaps the most outrageous idea: within a few years Hungarian higher education will be financially self-sustaining. In plain English, the government will not put a penny into maintaining Hungarian universities. Well, such a thing is simply unimaginable. 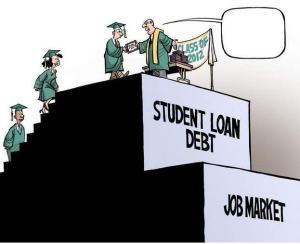 There is no country in the world where higher education is maintained simply through tuition. Not even in the United States, which is usually brought up as the example of the most unfair system of higher education in the western world. But in the United States not even private universities, where tuition fees are very high, can exist simply on tuition paid by students. They still need massive financial help from alumni and, yes, grants for research projects or even the teaching of certain subjects that might be useful from the government’s point of view. For instance, during my tenure at Yale we received a grant of $100,000 for a number of years to teach Polish, for which the university didn’t have available funds. And naturally there are the state universities that receive large sums of money from state budgets. For example, for the 2012-2013 school year the University of Connecticut received $284 million from the state of Connecticut. A nice sum, although because of budget cuts it is $45 million less than the year before.

And after Orbán announced that he is planning to maintain Hungarian state universities from tuition fees alone, he immediately added that “I’m an enemy of tuition because we don’t know where students will get the money for tuition. Therefore I’m not arguing in favor of the introduction of a tuition system, but instead I am advocating an arrangement by which the state gives an opportunity to the poorer students to be able to educate themselves through long-term loans.” Thus tuition is not tuition if it is paid with borrowed money.

He elaborated on this plan by saying that “the government doesn’t want to finance walls. Thus we are not interested in ensuring that certain institutions continue to function, but instead we want students to have influence through their application decisions which universities are good and which are not.” This needs a bit of “translation.”

Let’s start with the basic educational philosophy of Viktor Orbán. He wants to limit the number of students who embark on university studies. While the European Union is encouraging countries to increase the number of college graduates, Orbán’s Hungary is moving in the opposite direction. He and Rózsa Hoffmann, undersecretary in charge of education, severely cut back on the number of tuition-free slots–from 53,000 to 32,300.  The immediate result of this decision was that 30,000 fewer high school graduates even applied to college this year.

Now, if I understand Orbán’s words correctly, he wants to limit the number of institutions as well. In a way that makes sense: fewer students need fewer colleges and universities. The decision as to which institutions remain will be based on the number of applicants to each university. Fewer applicants will mean the closing of the school. And the few popular schools that remain will be maintained by the students. They will be the ones who will make sure that the walls of the buildings do not collapse.  Today, in fact, the cabinet will discuss the results of the applications, and those colleges that were less popular will not receive any government subsidy. That is, they will die.

If Fidesz wins the next election, in the next three to five years the “system will be operational [üzembiztos].” And the saddest thing about all this is that his young audience on the ship where the meeting was held didn’t tell him, “You know what?  Jump into the Danube, you fraud!”