It was two years ago that I wrote about a Turanian tribal meeting in Hungary. At that time a friend of mine sent me a link to a Hungarian-language paper published in Romania. The article he called my attention to was a detailed description of Kurultaj 2010, a three-day affair organized by the Hungarian-Turanian Foundation.

Those were the good old days. By now the fourth Turanian tribal meeting that is being held in Hungary starting today is a semi-official, government sponsored affair. One doesn’t have to go to an obscure Romanian website to read a description of  the event. Today, one of the Fidesz deputy speakers of the house is the sponsor of the tribal meeting and the Hungarian government is providing a generous grant of 70 million forints to the foundation to hold the gathering.

Last year apparently 150,000 people attended the affair, but this year the organizers are expecting 250,000. And while two years ago the delegations of 12 countries took part in the event, this year the number of participating countries is 25. The organizers expect forty newspapermen from Turkey alone. Ten countries’ television crews will also be present. The entertainment is being provided by 111 groups made up of people with an interest in early Hungarian history and customs.

The participants coming from abroad, allegedly relatives of the Hungarians, were greeted with great fanfare in parliament, in the chamber of the former upper house. Even the Foreign Ministry was represented by Ernő Keskeny, the head of the department dealing with Eastern Europe and Central Asia. He emphasized that “the organization of Kurultaj is in accord with the present government’s foreign policy strategy, the politics of opening toward the East, and it will surely contribute to its success.” Until now this event was associated exclusively with Jobbik, but it seems that the Hungarian government is now actively supporting this yearly gathering of  the Hungarian-Turanian Foundation.

There are two problems with Turanism. The first is that it is a completely bogus theory that has no scientific foundation. The second is that Hungarian Turanism is associated with Ferenc Szálasi’s Hungarism as well as the ideology of Jobbik.

The term “Turanian” was coined by Max Müller (1823-1900), a German orientalist. He called all languages that did not belong to the Indo-European or the Semitic language families Turanian. Linguistically it turned out to be a faulty theory, but “Turanian” continued to be used in a geopolitical sense for a while. Turan is the Persian name for Central Asia, and the original Turanians were an ancient Iranian tribe. Jobbik’s support of Iran can perhaps understood not only as a reflection of its anti-Semitism but also of its attachment to the idea of Turanism. 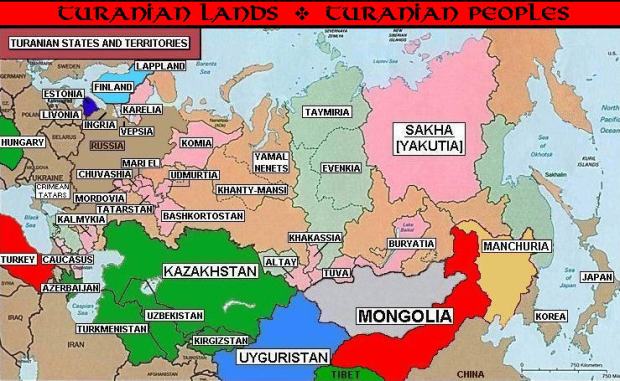 Turanian lands and people according to the Hungarian-Turanian Society

Turanism in Hungary became especially fashionable in far-right circles after World War I. They were disillusioned with the West because of the Treaty of Trianon and turned toward the East in search of new allies. Doesn’t that sound familiar? The most radical Turanians actually stressed the superiority of Eastern culture and race over the Caucasians of the West. Ferenc Szálasi was among those who believed in the existence of a Turanian-Hungarian race that also included Jesus Christ; this idea became a key part of his ideology of Hungarism.

Today Jobbik and its president are wholehearted supporters of Turanism and Pan-Turkism since Jobbik considers Hungarian to be a Turkic language. And it seems that the Hungarian government is ready to join ranks with Jobbik in supporting Turanism, thereby standing behind an absolutely unscientific theory. Two years ago I thought that Sándor Lezsák (Fidesz) might not be familiar with the history of Hungarian Turanism. By now, I am certain that he knows all about Turanism past and present and belongs to the extreme right of the party whose ideology includes a belief in Turanism. I would put László Kövér in the same category. With the “rehabilitation” of the Horthy regime comes a revitalization of Turanism. Where will this all lead? Certainly not back to Turan but perhaps out of the community of European nations in spirit and ideology.