According to a seasoned former Hungarian diplomat, the Hungarian decision to extradite Lieutenant Ramil Safarov to Azerbaijan is “a much more serious scandal than it seems today.” Most likely he is right, although it took less then twenty-four hours for the case to receive worldwide attention and for Hungary to be condemned.

During the summer of  2004 NATO’s Partnership for Peace program organized a two-month program for officers from the member states in Budapest. Both Armenia and Azerbaijan joined the Partnership when it was established in 1994. The young officers were supposed to study English in the Hungarian capital. Ramil Safarov, an Azir national,  purchased an ax locally and at night when the Armenian officer, Gurgen Margaryan, was asleep he brutally hacked him into pieces. He practically severed the Armenian officer’s head.

During his trial Safarov freely admitted that the only reason for killing Margaryan was that he was an Armenian. He showed no remorse for his crime. In addition, while in jail he attacked the guards, for which he received two and a half years  in a separate trial. In 2006 the verdict was announced: he received a life sentence for premeditated murder. He has been in a Hungarian jail since.

The ethnic conflict between Azeris and Armenians is of long standing. The center of the conflict was a contested area, Nagorno-Karabakh, that during the Soviet period was artificially attached to the predominantly Muslim Soviet Republic of Azerbaijan in spite of the fact that the majority of the inhabitants were Christian Armenians. In 1988 war broke out between the two countries over the area; the war lasted almost six years and eventually ended in Armenia annexing the region. In 1994 a ceasefire was signed but peace talks have not been held. Thousands died on both sides, and  a huge demographic change occurred. About 230,000 Armenians from Azerbaijan and 800,000 Azeris from Armenia and Karabakh were displaced as a result of the conflict. Currently, Armenia’s population of about 3.5 million is 97% ethnic Armenian.

Ever since the sentencing of Ramil Safarov in 2006 the Azeris considered him to be a national hero, a fact that was well known to the Hungarian authorities. But if they hadn’t known it, the Armenians told them repeatedly in the last year or so. The warning intensified after Viktor Orbán visited the Azeri capital. Their worries must have been further heightened when Péter Szijjártó went to Baku to negotiate with the Azeris a month later.

I should mention here that Péter Szijjártó, who started off as a personal spokesman of Viktor Orbán, was elevated to be undersecretary in the prime minister’s office in charge of foreign affairs in June 2012. Thus, we can safely assume that Foreign Minister János Martonyi’s already meager role in the formation of Hungarian foreign relations has been further reduced. Now even foreign policy is directly conducted by Viktor Orbán. With questionable results, as we shall see. 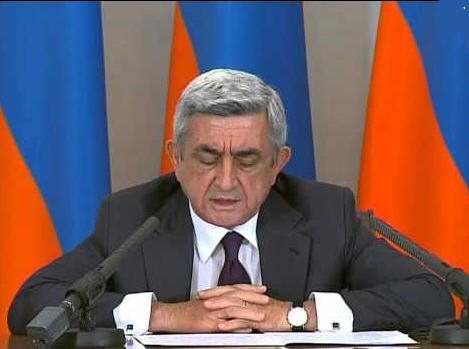 Yet it happened. Safarov was released to Azerbaijan and was greeted as a national hero. On his arrival he was draped in the Azeri national flag and thousands of admirers presented him with flowers. He immediately received clemency from the Azeri president, Ilham Aliyev, and the minister of defense bestowed on him the rank of major.

Armenians are outraged. The government immediately decided to break off diplomatic relations with Hungary, and President Sakrisyan announced that “the Armenian nation will never forgive” Hungary for what happened. Normally the Armenians are not kidding.

Now the question is who knew what? Did the Hungarian foreign minister and the speaker of the Hungarian parliament lie when even in the last minute they claimed that there was no possibility of Hungary handing over Safarov to Baku? I venture to say that it is possible that in fact they didn’t know about the deal. Whether Tibor Navracsics lied–as his Armenian counterpart, Hrayr Tovmasyan, charged–is more likely, but I don’t exclude the possibility that he was assured byViktor Orbán about the Azeri president’s assurances.

But that Viktor Orbán knew about what would happen is certain. It was a “financial deal.” According to Armenpress, the official Armenian news agency, Hungary has been in serious negotiations with both Turkey and Azerbaijan for financial assistance for some time. The same news agency claims that Novruz Mammedov, the advisor to Ilham Aliyev on foreign affairs, has been engaged in secret negotiations concerning Safarov’s release to Azerbaijan for at least a year. According to widely held belief, the Azeris were ready to buy 3 billion euros worth of Hungarian bonds in exchange for the release of Safarov.

Immediately after the news broke of Safarov’s pardon the U.S. State Department released a press statement that read: “The United States is extremely troubled by the news that the President of Azerbaijan pardoned Azerbaijani army officer Ramil Safarov, who returned to Baku today following his transfer from Hungary. Mr. Safarov had been serving a life sentence in a Hungarian jail for murdering Armenian officer Gurgen Margaryan during a 2004 NATO training event in Budapest. We are expressing our deep concern to Azerbaijan regarding this action and seeking an explanation. We are also seeking further details from Hungary regarding the decision to transfer Mr. Safarov to Azerbaijan.”

Even President Obama voiced his concern after the Armenian National Committee of America (ANCA), a lobbyist group in Washington, called on him “to publicly condemn Hungary for the release of the terrorist” Safarov. At the same time ANCA called on people “to take a moment to protest this travesty of justice.” ANCA asked “to call, e-mail or post a facebook message to the Hungarian ambasador to the US, His Excellency György Szapáry”. Well, the letters poured in. Here are a few of the thousands. “Don’t sleep Hungary! It’s dangerous nowadays!,” a reference to the fact that the Armenian officer was killed in his sleep. Or, ” Shame on you Hungary, Hungary supports a murderer!!!! :(((,” or “Gurgen Margaryan’s blood on the hands of Hungarian Justice.” And they go on like this endlessly.

The Hungarian opposition’s reaction is also one of outrage. LMP expressed their sympathy with the Armenian people. LMP’s statement emphasized that it would have been the duty of the foreign ministry to warn the ministry of administration and justice of the most likely consequences of releasing the Azeri murderer. They expressed hope that there is no connection between Azeri plans to purchase Hungarian government bonds and the release of a criminal.

DK as usual was more forthright. The leadership of the party demanded Tibor Navracsics’s resignation and suggested that parliament immediately convene a meeting of the committee on foreign affairs. In addition, they expressed their opinion that “Viktor Orbán sold the honor of Hungary.” With the release of Safarov the government sent a message to the world that “Hungary is  a country where human life is for sale, where someone who kills another person is not a criminal but a hostage who is kept in jail to be released in the hope of ransom.”

László Kovács (MSZP), former foreign minister and currently deputy chairman of the parliamentary committee on foreign affairs, indicated that he will ask for an immediate meeting of the committee to discuss the matter of the release of the Azeri murderer. Kovács shares the widespread belief in opposition circles that Safarov was released in the hope of Azeri financial assistance to Hungary. However, Kovács considers the way that it was handled most unfortunate. The release should have been accompanied by Azeri guarantees so that, if the Azeri government violated the agreement, the Hungarian government could have immediately protested. But no Hungarian protest followed, which further strengthens the view that the Hungarian government knew full well what the Azeri government was planning to do as soon as Safarov arrives in Baku.

Today Fidesz released a statement that said only that the party fully supports the government on this issue since the transfer in no way contradicted international rules and regulations on extradition.  Gabriella Selmeczi, the spokeswoman of the party, cited the Convention on the Transfer of Sentenced Persons of 1983, which was later accepted by Hungary. Ramil Safarov, an Azeri citizen, asked for his transfer to Azerbaijan. Hungary only obliged.

A couple of hours later the ministry of foreign affairs and the ministry of administration and justice also released a statement. Although the statement emphasized that Hungary respects Christian Armenia and the culture and heritage of the Armenian people, it added that they regret Armenia’s decision to break off diplomatic relations with Hungary. This statement also referred to the 1983 Convention on the Transfer of Sentenced Persons and righteously pointed out the absolutely legal way in which Hungary handled the transfer of Safarov.

Although I don’t think that either Foreign Minister János Martonyi or Minister of Justice Tibor Navracsics will resign as LMP and DK demanded, Martonyi without any prodding should do so. Orbán is making a clown out of him, and if he were a man of integrity he would have handed in his resignation a long time ago.

What will happen after this incident? Perhaps not much, but Viktor Orbán’s reputation will be further battered. And he is dragging the whole country after him into the abyss.