I just finished reading approximately 100 articles on the topic of the week-long hunger strike of four members of the Demokratikus Koalíció leadership. DK is the newest political party in Hungary and at present is the smallest, a couple of percentage points below LMP according to the latest public opinion polls. The hunger strike was announced by Ferenc Gyurcsány, former prime minister of Hungary and chairman of DK, on a talk show on TV2 last night. 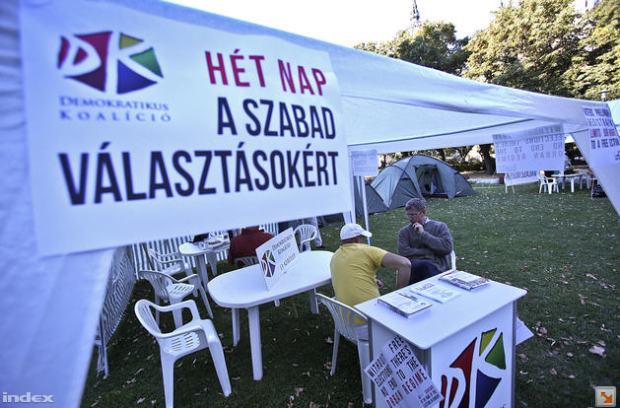 Apparently the presidium of DK  made the decision to have four of its leading politicians stage a hunger strike in front of the parliament building: Ferenc Gyurcsány, Csaba Molnár, Péter Niedermüller, and István Kolber. The four men will survive on water and tea. They set up four tents for sleeping purposes and a fifth, a kind of a living room, where friends and supporters can visit them. This hunger strike will cost DK 130,000 forints, the fee Parliament’s office headed by László Kövér charges for the use of that particular part of Kossuth Square.

The four men’s decision to stage a hunger strike was prompted by the extreme danger they see in the Orbán government’s plan to introduce a registration procedure into the Hungarian election system. Up until now the election commission has been responsible for keeping an accurate list of all eligible voters, and apparently the commission’s record has been good. Therefore registration over and above a centrally prepared electoral list seems superfluous and can serve only one purpose: to limit the number of active voters.

Although the question of registration has been discussed back and forth in the media since late May, Ferenc Gyurcsány believes that the Hungarian public is not aware of the great danger registration would pose to Hungarian democracy. Extreme threats must answered by extreme measures. And a former prime minister on a week-long hunger strike is the perfect story to make a huge splash internationally.

You may recall that last December some LMP members chained themselves to the entrance of the parking area reserved for members of parliament. Some members of  DK and eventually of MSZP decided to join them. When the police arrived the whole group, including Ferenc Gyurcsány, was taken to the police station. Because of the presence of the former prime minister the news hit all the major international newspapers. If he hadn’t been there the news would have been a great deal less “interesting.”

This is exactly what happened this time. Just in the English language press I found sixty-four articles while searching for “Gyurcsány.” The Hungarian media is mostly making a joke out of it, and what I found interesting is that the so-called “liberal” media are a great deal more critical than the right-wing papers and blogs. The latter are often only jovial. A local paper from the County of Bács came out with the headline: “Feri is on hunger strike for a week” and kept calling him “the Feri of the country.” Feri is the nickname for Ferenc. Another paper from the County of Hajdu made snide remarks about “a very rich businessman on a hunger strike.” The far-right Echo TV introduced the news with a slang expression: “Gyurcsányék sátorba cuccoltak, és koplalnak” (Gyurcsány and his friends put their stuff into a tent and are starving). The spokeswoman for Fidesz made jokes about four guys sleeping in the same tent.

On the other hand, some of the so-called liberal bloggers were outright vicious. “Örülünk Vincent” announced that Gyurcsány is already politically dead and “it is not becoming of a dead man to be so frolicky.” The final words of “Vincent” are puzzling. “As I already said, Gyurcsány could make himself useful for the opposition of Orbán only if he were jailed as a political prisoner. We would fight for you, Feri, we would pick up the cobblestones for you and would lay siege to the headquarters of Közgép. Then they would let you rot in jail. You are a symbol, Feri, the symbol of freedom at the wrong time at the wrong place.”

Index is also burying Ferenc Gyurcsány and makes fun of everybody and everything. Nyugat talks about the fretting grandmas who visit Gyurcsány while HVG gleefully announces that there are very few people around and about. Hajdupress, a paper from Eastern Hungary, seems to be sympathetic but finds the whole thing useless. Hunger strikes should last as long as the demands of  the strikers are not met. But then Gyurcsány and his friends would die of hunger because the registration is coming regardless. So, let’s not do anything.

There is talk about everything except the reason for the hunger strike. If the bill on the election law includes registration and if the results are detrimental to the opposition, then perhaps the liberal press will not be so delighted as it seems now. Only one former MSZP MP, József Karsai, came to Gyurcsány’s rescue even though Karsai was known for his very populist opposition to Gyurcsány when he was prime minister. “Ferenc Gyurcsány is right on the question of registration,” Karsai announced.

I think it is time to wake up before it’s too late. And let’s not make a joke out of everything. The situation is not funny.