It was a busy day in Hungarian politics. The long-planned Orbán visit to Berlin finally took place, and after a lot of wrangling two of the opposition civic movements, Szolidaritás and Milla, agreed to hold their October 23 demonstrations together. This news gained added importance when it turned out that former prime minister, Gordon Bajnai, will be one of the speakers at the demonstration. Although we don’t know what Bajnai will say, those who believe that he is the only person who could gather the various groups and democratic parties into a common fold hope that he will announce his return to politics.

Initially I thought that I could squeeze both topics into today’s post, but after rereading my notes I came to the conclusion that this was an impossibility. So, let’s deal with international affairs today and continue tomorrow with the new domestic developments.

A growing number of people would like to see the whole Orbán regime disappear, and these people fervently hoped that “Merkel would tell Orbán off.” They are most likely very disappointed because it seems that all’s well between Angela Merkel and Viktor Orbán. At least this is what we could discern from the joint press conference held after a private luncheon, also attended by György Matolcsy and Zoltán Balog.

Let me start with an article by Mátyás Eörsi (earlier SZDSZ and now a DK politician) that appeared in Magyar Narancs. Eörsi, who has diplomatic experience (he served as undersecretary in the foreign ministry for a while), expressed his belief that although Angela Merkel most likely has a very bad opinion of Viktor Orbán she is not going to focus on Hungary’s foundering democracy because she needs allies for her EU policies. And, Eörsi added, Viktor Orbán will be a willing and “constructive partner” in this endeavor of hers.

Of course, we don’t know whether this is how the conversation went. My personal feeling is that Hungarian domestic affairs were discussed, at least in passing. That this discussion might have been less than congenial is also likely. I don’t know what German word Merkel used to describe the tone of the discussion, but the Hungarians translated it as “nyitott” (open). “Open” in this context means “candid.” When we hear the word “candid” attached to diplomatic negotiations we interpret the word to imply that the conversation was frank and outspoken.

The German Chancellery is fully aware of what is going on in Hungary. Only yesterday the spokesman for the German government sent a message to Orbán: “Someone with a two-thirds majority must know that with that majority goes great responsibility towards those who are in the minority.” The German media while preparing for the Orbán visit also published scathing articles about Orbán’s attitude toward democracy. The authors of one opinion piece predicted that Merkel most likely will “admonish” the Hungarian prime minister. Well, if she did we didn’t hear a thing about it. The Hungarians also anticipated a scolding from Angela Merkel. Otherwise why did Foreign Minister János Martonyi feel that he had to emphasize to the Deutsche Presse-Agentur that although the Hungarian government might have made some errors “during the enormous transformation that has occurred in the last two years,” the Orbán government is fully committed to democratic principles? The same message was delivered to the German public by Orbán himself in his interview with the German paper Handesblatt, where he described himself as “a zealous believer and supporter of democracy.” 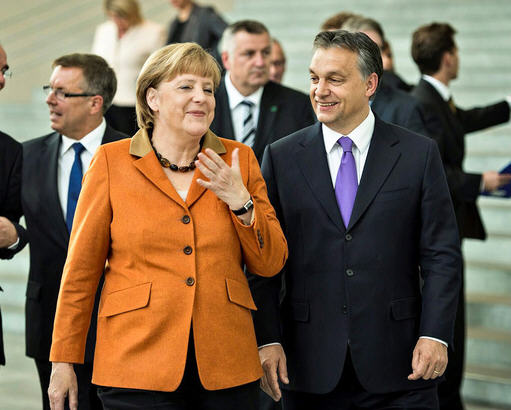 How friendly / MTI-Office of the Prime Minister

Admittedly, Merkel went out of her way to be pleasant to Orbán, perhaps, goes one line of reasoning, because the usual diplomatic language of understatement has no effect on the Hungarian prime minister. Now, it seems, Merkel decided on a new strategy. To give the impression that she understands, partially at least, “the motives behind the reforms.” Hungarian observers think that Merkel went too far here. Because the Orbán government is currently in trouble with the European Court of Justice and the European Council, just to mention two of the most important institutions of the EU. Yes, in the past Orbán under pressure did make changes to some of the laws that the European Commission found most objectionable, but these changes were neither substantial nor fundamental.

So, what did Orbán promise to Merkel? We don’t know, but I’m almost certain that the soothing words of Angela Merkel came with a price tag, though probably more Wal-Mart than Neiman Marcus. László Lengyel, an economist and political commentator, thinks that perhaps Matolcsy’s latest austerity program may have something to do with the Merkel-Orbán meeting. After all, Matolcsy made a complete turnabout. The latest attempt to balance the 2012 and 2013 budgets contains no “unorthodox” items. It is also possible that for German support Orbán promised certain changes in the most controversial new laws on the judiciary, the media, and elections.

After the meeting with Merkel Orbán made a speech at the Konrad Adenauer Foundation. In the audience of 200 sat Imre Kertész, the only Hungarian Nobel Prize winner for literature and no friend of Viktor Orbán. His speech, which naturally had been written before his conversation with Angela Merkel, repeated all the clichés we’ve heard from him of late: nation building, self-pity as an obstacle to success, and that Hungarians shouldn’t feel that they belong to a small nation.

What was interesting was that after the speech he got some hard questions. Keep in mind that at the Konrad Adenauer Foundation Orbán was among friends. However, he wasn’t fazed by such comments as that German firms don’t trust the Hungarian government because of its erratic and unpredictable attitude toward the business world. Yes, answered Orbán, the extra levies hit the service sector especially hard, but he “has bad news for the players in this sector”: their situation will not change in the future. There will be no higher profits.

When a German constitutional scholar said that Hungarian judges in the last year or so had rendered some very brave decisions and added that “in Germany a judge doesn’t have to be brave,” he just has to do his job, Orbán rather impertinently answered that in the minds of Hungarians the role of judges is different than it is in Germany. Moreover, he “doesn’t consider the German situation the standard” to which Hungary has to adjust.

All in all, if Merkel quietly achieved something during her talk with Orbán, it couldn’t have been a heck of a lot. The man seems to be feeling on top of the world.