Let’s start with the bare facts. Géza Jeszenszky, who studied history and English at ELTE’s faculty for future high school teachers, became foreign minister in the Antall government (1990-1994). His appointment may have had something to do with his being the husband of Prime Minister József Antall’s niece. In any case, Antall’s government had a large number of historians, which was not really a surprise because Antall himself was one of them. When I first became active on the Internet I once made the mistake of saying something nice about historians. One of the people on the discussion forum loudly complained: “I don’t want to hear any more about historians.” He obviously wasn’t a fan of the Antall government. 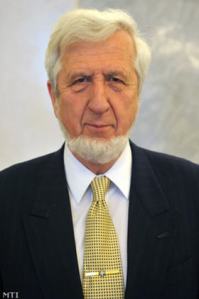 The list of Jeszenszky’s publications is fairly slim, but admittedly the list I saw may not be complete. The only book I heard about earlier was one he published in 1986 and which was reprinted by the conservative Magyar Szemle Alapítvány in 1994 entitled Az elveszett presztízs. Magyarország megítélésének megváltozása Nagy-Britanniában, 1894- 1918 (Lost prestige: The changing reputation of Hungary in Great Britain, 1894-1918). In addition, I found two textbooks, both in English, for his English-language courses at Corvinus University: The Outlines of the History of International Relations in the 20th Century (1984) and The New (Post-Communist) Europe and Its Ethnic Problems (2005). It is the second textbook that caused the latest upheaval.

After the change of government in 1994 Jeszenszky went back to teaching full-time at Corvinus. He taught part-time even during his tenure as foreign minister. A friend of mine was a student of his in 1990-1991, but when I asked her what the subject matter was she had absolutely no recollection. That might give us an idea about his effectiveness as a lecturer.

In 1998 when Fidesz with the help of the Smallholders won the elections, Jeszenszky was back in the political arena. This time as Hungarian ambassador to Washington. Most people’s recollection of Jeszenszky as foreign minister and later as ambassador is pretty negative. As János Dési of Népszava said in an opinion piece, a career counselor wouldn’t have suggested diplomacy as a profession for the man. Dési is right. Jeszenszky had two left hands and was very often caught in uncomfortable situations of his own making. Jeszenszky even then made some unacceptable remarks about the Hungarian Roma in an interview with the conservative Washington Times (see Imre Kertész in Élet és Irodalom, 1999, and István Gereben, a well-known American-Hungarian who died recently, in The Washington Post, November 26, 1999). All in all, it seems that this most recent “unfortunate incident”  might not be an accident.

Jeszensky could hardly wait for the government change so that after eight years he would be back in the thick of things. This time he received a less illustrious position: he was named ambassador to Norway and Iceland. Quite a demotion after the prestigious post of ambassador to Washington.

So now to the incident. Two university professors and an LMBT (Leszbikusok, Melegek, Biszexuálisok és Transzneműek) activist discovered the following sentence in his textbook designed for his course on The New (Post-Communist) Europe and Its Ethnic Problems. The objectionable sentence read: “The reason why many Roma are mentally ill is because in Roma culture it is permitted for sisters and brothers or cousins to marry each other or just to have sexual intercourse with each other.” The first newspaper to report on Jeszenszky’s unfortunate  description of the alleged marriage customs of the Roma was Index, whose reports also unearthed some verbatim quotations in the textbook from Wikipedia and the Hungarian Foreign Ministry’s study on Hungary’s Gypsy population without mentioning the source. Although Jeszenszky complains that his critics picked out one sentence from his lengthy and objective description of the Roma minority in the region, a careful reading of the text, part of which is available in English tells us differently.

While Jeszenszky’s opinions of the Gypsies’  marital habits were being aired in Hungary, Jeszenszky as ambassador to Oslo was the organizer–jointly with the Norwegian Research Institute on the Holocaust and on Religious Minorities–of a conference on Raoul Wallenberg. László Karsai, a historian of the Hungarian Holocaust, was one of the invited guests. After learning of Jeszenszky’s remarks in his textbook, he decided not to attend. What happened at this point is not quite clear. According to one source, the organizers of the conference first tried to convince Karsai to change his mind but then,”becoming familiar with Jeszenszky’s text,”  they asked Géza Jeszenszky not to attend the conference. He was labelled a racist in the Hungarian left-liberal press. DK and LMP demanded his resignation. But the Hungarian Foreign Ministry saw nothing wrong. According to the communiqué they released, Jeszenszky wrote not as a diplomat but as a professor of minority questions. János Martonyi doesn’t seem to be bothered by the fact that Jeszenszky’s activities as a diplomat most likely are undermined as a result of this incident.

On ATV on Wednesday nights there is a program called “A tét”  (The stake) where the historian András Gerő is often an invited guest. The moderator poses a question and asks the three guests to comment. Gerő is usually the last to answer, and he invariably begins with “I would approach the subject from a different point of view.”  Well, this time I will do the same. I don’t know whether Jeszenszky is a racist or not, but I do know one thing: he is a lousy scholar.

I will start with a general observation. I am constantly amazed that quite a few Hungarians have several degrees in entirely different fields. An M.A. in history, another in sociology, and a third in psychology. Sometimes they seem to be studying these subjects simultaneously in different cities, which I find especially intriguing. Then there are all those members of parliament who are concurrently studying full time, usually law. Or physicians who have four or five specialties. These people must be geniuses. I sure couldn’t do that. Just as I couldn’t give a course on minorities in the post-communist world because I don’t have the background. And unfortunately Jeszenszky doesn’t seem to have it either. His field of interest was obviously diplomatic history, specifically Hungarian diplomatic history. And this is plenty for one person to digest.

According to the course description Jeszenszky lectures on “nineteen independent, sovereign states.” That is quite a job for someone whose background is in Hungarian diplomatic history in the twentieth century. In addition to the ethnic minorities traditionally treated as such, he also spends fifteen pages on the region’s Roma population.

Géza Jeszenszky doesn’t have to be an expert on the Gypsies, but if he’s going to talk about the marriage customs of the Gypsy population he should be able to cite some reliable sources. When pressed, Jeszenszky made some vague references to an English language article in a medical journal that he couldn’t read in full because it wasn’t available in its entirety on the Internet. By the second interview he came up with another article that was published twenty-five years ago; it was a very limited study of twenty Gypsy families’ marriage habits. I’m pretty sure that the subject has a large literature, and it simply isn’t enough to read a couple of articles online. Not if one wants to write a textbook for university students.

One can read an awful lot of nonsense on every subject, and even if Jeszenszky found two articles that claimed that the large number of Roma children in special education classes is proof of the fallout from intermarriage in the Gypsy community, he should have had the good sense to question the claim. The fact that a large number of Gypsy students are placed in special education classes is not because they are feeble minded. Teachers don’t want to bother with children who might be behind developmentally due to their lack of intellectual stimulus at home or children who are disruptive. A responsible scholar, especially considering the sensitiveness of the issue, doesn’t write down such twaddle as his own opinion. Perhaps if he had added “according to medical experts” it would have been a tad more acceptable, or at least he could have saved himself a lot of trouble. But even then critics would ask him to produce evidence, which obviously he can’t.

As for intermarriage, it is true that in all “closed communities” there is more than an average number of marriages among relatives that may cause genetic mutations which can be devastating for members of the community. But in order to ascertain the rate of intermarriage among Gypsies one would have to do serious genealogical research. And then study what the results of intermarriage are in the population.

The superficiality and carelessness of Jeszenszky as a scholar is unforgivable quite apart from whether he is a racist or not.