As many critics of the Hungarian government feared or hoped–depending on the individual’s temperament–the European Court of Judges ruled against the Orbán government’s attempt to make a clean sweep of the Hungarian judicial system. By getting rid of hundreds of judges who had passed their sixty-second birthday, although they still had eight years to go until their mandatory retirement at the age of seventy, the government could “refresh” the ranks of judges with younger judges of its own picking.

After all, the Orbán government managed to get rid of the Chief Justice of the Supreme Court and replace him with a man whom it deemed less troublesome than András Baka, who had been nominated by former President László Sólyom. The government also completely reorganized the whole judicial system, at whose apex it placed Tünde Handó, a close friend of the Orbán family and the wife of one of the founders of Fidesz. So, through these new appointees the government currently has a certain amount of control over the the judiciary, especially if they find the “right men and women” to rule according to the government’s taste.

This radical firing of judges seemed problematic from day one, and the judges affected did not take this latest assault on themselves lying down. After all, they know the law. Now that only the ombudsman can petition the Constitutional Court, they barraged Máté Szabó to turn the case over to the Constitutional Court. Meanwhile others began suits on their own. Most of the cases are dragging on and on, but in two cases the plaintiffs won and the decision is final. The two judges must be given back their jobs and compensated for their financial losses. 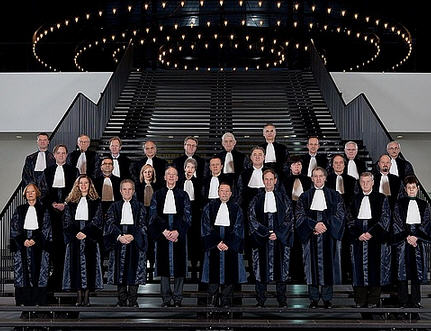 The Constitutional Court took its sweet time, but eventually it repealed the law affecting the judges. Viktor Orbán made it quite clear in July, however, that the government had no intention of carrying out the court’s decision. Instead, the government raised the possibility of changing the compulsory retirement age to 65.  János Áder, the new president, who should have reinstated the forcibly removed judges after the ruling of the Court, refused to fulfill his constitutional duty to do so. It was at this point that the European Court of Justice began to consider the matter in earnest on the urging of well over 100 judges who requested a review.

According to the ruling, the radical lowering of the retirement age for the judges constitutes “unjustified discrimination on grounds of age.” In the opinion it was stated that “the measure is not proportionate to the objectives pursued by the Hungarian legislature seeking to standardize the retirement age for the public-service professions and to establish a more balanced age structure in the area of the administration of justice.”

The official response from the Ministry of Administration and Justice was muted, noting that “the regulation referred to had already been annulled by the Constitutional Court in July of this year.” Viktor Orbán, as is his wont, was a great deal less restrained when he said that “one doesn’t often see someone who would hit a dead dog on the head.” After all, the law the European Court is talking about no longer exists.  Both the Chief Justice of the Kúria (formerly the Supreme Court) and the head of the Országos Bíró Hivatal, the above mentioned close friend of the Orbáns,  announced that their offices have nothing to do in the wake of the decision. It will be the legislature’s job to come up with an appropriate response that would remedy the present unlawful situation.

The opposition naturally wants the judges who would like to continue to work to be reinstated and allowed to work in their old capacities. Whether this demand will be met I very much doubt. According to Orbán, there is “no new situation as a result of the decision.” The Hungarian government will come up with a proposal to be submitted to parliament for “a new regulation on the retirement age of the judges.”

When I read this my first reaction was: “Here we go again!” The Orbán government with its never ending legal tricks will come up with another “solution” that will try to circumvent the decision. It will do that despite the European Commission’s promise “to keep an eye on the situation.” According to Viviane Reding, vice-chairman of the European Commission and Justice Commissioner, “the Court’s judgment is crystal clear and confirms the Commission’s legal analysis: Hungary’s forced early retirement of hundreds of judges, prosecutors, and notaries was against EU law. Hungary must now take all the necessary measures to comply with the judgment as soon as possible.” Moreover, since the Hungarian Constitutional Court mentioned only judges in its ruling but not notaries and prosecutors, Reding reminded the Hungarian government that it must remedy the situation in their case as well. The details of the ruling can be read in English on Portfolio.

Tomorrow there might be another unpleasant surprise, this time coming from Brussels. Hungary will learn whether the European Commission finds the financial plans the government submitted sufficient to lift the excessive deficit procedure against Hungary. If the decision is negative, Hungary might find herself in a grim financial state as early as 2013. The very substantial cohesion funds coming from the EU are at stake.