President János Áder waited until the very last minute allowed him by law to decide on the fate of the electoral bill. Today he announced that, instead of signing the electoral bill passed by members of the government party alone, he will send it over to the Constitutional Court to decide on the constitutionality of certain provisions of the bill. 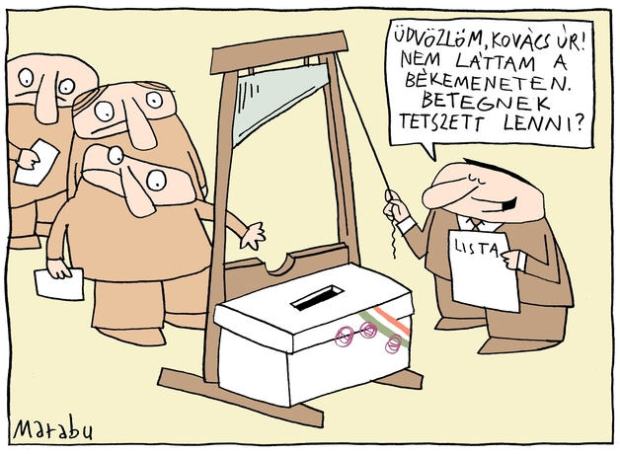 “Greetings, Mr. Kovács! I didn’t see you at the Peace March. Were you sick?” The cartoon accompanying the original text in Népszabadság

According to the opposition parties, the bill is unconstitutional in its totality. They were hoping that Áder would reject the entire bill, not simply question certain paragraphs. But, let’s face it, this would have been too much to expect from Áder, one of the founders of Fidesz. He found that the new electoral law by and large guarantees free and democratic elections. Áder had no problem with the idea of the entirely unnecessary registration process; he found only the restrictive nature of registration troubling. An eligible citizen, he maintained, should be able to register anywhere in the country and not just in the place of his residence. His second observation concerns the overly restrictive nature of advertising opportunities. As it stands, only public television and radio stations could carry political ads during the campaign season.

This is mighty little to object to. As you will see from the text below, there are many, many things that are wrong with this bill. I’m very pleased that I received an English translation of this Appeal by the members of the pre-1989 Democracy Movement to European Institutions that appeared in yesterday’s Népszabadság because I don’t think that anyone could better summarize the grave implications of this bill.

If the next Hungarian elections in 2014 were to be held under the recently rammed-through rules, they would be illegitimate and fraudulent which would be a first in the European Union.

The undersigned are participants of the human rights and democracy movement that opposed the one-party communist regime in the 1970s and 1980s. We struggled for a multi-party system; free and fair elections; and we achieved that goal in 1990. Every four years since then, Hungary has elected a Parliament and a government on the basis of laws designed and endorsed by all the political parties.

However, in a manner unthinkable in the last 20 years, the “procedural law on elections” passed on 26 November 2012 completed the removal of key checks and balances. By this new law, it becomes virtually impossible in 2014 to hold a free and fair election, one which prevents fraud and expresses the real will of the electorate.

We would like to elaborate on three grave concerns regarding the new Hungarian election laws:

We call on Hungary’s Constitutional Court, the European Commission, the European Parliament, the governments of the European Union, the Council of Europe and the Organization for Security and Co-operation in Europe to take preventive action, so that Hungarian citizens would not be forced to go to the polls in 2014 under the recently imposed, illegitimate and discriminating laws that practically institutionalize the rigging of election results. All diplomatic and legal tools available for the protection of European values, as well as possible new measures, should be used to halt the entrenchment of autocracy in a European Union member state.

Action is also needed to maintain society’s peace. For the last two years, the foundations of democracy have been systematically demolished. A free and fair election would be Hungary’s last chance to peacefully return to democracy and the rule of the law. If the elections will be rigged, or even conducted under flawed laws that have been unilaterally enforced, democracy’s regeneration through the rule of law would become impossible in a member state of the European Union. Similarly to nations living under autocracies outside of the European Union, Hungarians might find no other recourse than civil disobedience, or even conflict. European institutions should not wait idly until a government which blatantly ignores our common European principles pushes a member state into a potentially violent crisis.

We demand from the Constitutional Court not to make partial decisions and merely object to formalities; it should make clear that these unilateral election laws prevent holding free and fair elections, eliminate the guarantees for the rule of law, and destroy democracy.

We appeal to the European institutions to monitor the review of the Constitutional Court by taking the following concerns into consideration.

The party which was freely elected in 2010 has now unilaterally passed an electoral law that pursues nothing but its own party interests. It did this on its own, despite fierce protests by all other parties. It acted in the same way as it did earlier, when it forced through a new constitution, or when it did away with pluralism in media governance, independence of the judiciary, the powers of the Constitutional Court, equality of religious denominations, or the rights of trade unions.

The ruling party justifies its diktat by pointing to its two-thirds legislative majority, attained in the 2010 elections. But its actions fly in the face of the Copenhagen Criteria, which established the EU’s basic principles of democracy and the rule of law. In our new Europe, fundamental rights may be decided upon only by securing widespread legitimacy, by striving for consensus, and by exercising self-control. No parliamentary majority can justify the extirpation of citizens’ rights for free and fair elections.

The new media and electoral laws, together with the new constitution that is cynically adjusted to accommodate the new oppressive laws at every turn, will prevent millions of Hungarians from exercising their fundamental right to make an informed choice, or even to vote. The new regulations put insurmountable obstacles in the way of participation in the upcoming election, and arbitrarily limit the campaign conditions for opposition parties.

The new law grants a majority to members appointed and delegated by the governing party at all levels of the committees supervising elections, giving them the power to deny complaints or to adjudicate them in a partisan manner.

We ask all Hungarian and European friends of democracy, as well as the Hungarian Constitutional Court and the European institutions in particular, to take immediate action. Please help us protect the right to free and fair elections. We have a short year and a half only. There is no time to waste.

Miklós Haraszti, former OSCE Representative on Freedom of the Media