Earlier I mentioned that after his return from Brussels Viktor Orbán was flying to Moscow. Ahead of yesterday’s meeting no one knew exactly what the negotiations would be about. The Hungarian press mentioned possible several topics: the further development of the Paks Nuclear Power Plant; the building of the Southern Stream that will go through Hungary; the sale of Russian natural gas; transportation, especially the country’s rail system; and bilateral trade. I suspect that all of these items have been under discussion between the two countries for the past few months. Obviously no detailed discussion of these topics took place during the fifteen-minute audience Vladimir Putin granted the Hungarian prime minister.

The Hungarian media poked fun at the brevity of the visit and complained that Viktor Orbán’s visit didn’t make banner headlines in the Russian press. Yes, the meeting was short, but presumably all the groundwork had been laid for it.  Orbán had only to show his face to endorse the negotiations of his underlings. Moreover, one must keep in mind that for Hungary Russia is a much more important partner than vice versa. In trade relations the Hungarian share of Russian imports is only 2%. On the other hand, Hungary because of its dependence on natural gas and oil is heavily dependent on Russian goodwill.

Hungarian foreign policy experts pointed out that the Russians are pragmatic negotiating partners who will not be bothered by Viktor Orbán’s earlier attitude toward Russia. Because, in case anyone has forgotten, Viktor Orbán’s relations with Russia were outright antagonistic during his first four years in office. And, while in opposition, he fiercely attacked both Péter Medgyessy and especially Ferenc Gyurcsány for trying to mend fences with Russia. He was especially critical of Gyurcsány’s efforts to make a deal with Russia on the Southern Stream. He managed to blacken Ferenc Gyurcsány’s name in Washington where the Bush administration was certain that Gyurcsány was not only interested in obtaining natural gas but that somehow he was ideologically attracted to the semi-dictatorial Vladimir Putin. The same Vladimir Putin to whom western newspapermen compare Viktor Orbán nowadays.

So, let’s look at the long process that eventually led to Viktor Orbán’s conversion. In January of 2007 he announced that “we don’t want to be the happiest barracks of Gazprom.” In November of the same year he called the Gyurcsány government’s policies in connection with Russian-Hungarian relations incomprehensible. How can Hungary be “a bridge between the West and Russia”? Hungary’s place is squarely in the West. This is the same man who now finds his country’s destiny in the East.

During the Russian-Georgian conflict he sided with Georgia. In October 2008 he claimed that “in Hungary today one-sided and unbalanced pro-Russian policies are being pursued.” In 2009 he considered a potential Russian threat to Europe a serious matter. Even after he won the elections, in November 2010, he said that any kind of partnership with Russia was dangerous. He complained that more and more EU countries were initiating economic cooperation with Russia and that this would lead to a dangerous economic and political penetration of Russia into the West.  He declared that “even NATO  doesn’t consider Moscow an opponent anymore but a partner” and expressed his fear that “the western world will eventually forge a historic alliance that will be dangerous for Central Europe.”

This fear of Russia led Viktor Orbán to come up with the idea of a cordon sanitaire or an axis as he called it. The former socialist countries should band together from the Baltic to the Adriatic to make sure that Russian political and economic ambitions are checked. One “political analyst” went so far as to write in Heti Válasz (December 2009) that he believed that Russia would be genuinely fearful if Viktor Orbán were to become prime minister of Hungary. The mouse that roared!

After his election Orbán visited Poland where he most likely tried to convince Donald Tusk to join this axis. Orbán failed in this attempt, however, and from there on the government made little mention of this grand alliance forged by the Hungarian prime minister. But as the speech he gave in November 2010 indicates, he didn’t abandon his anti-Russian sentiments and his fear of Moscow.

Although his meeting with Putin was very short, Orbán arrived in Moscow with a large delegation. He was accompanied by György Matolcsy, minister of national economy; Mrs. László Németh, the mystery minister of national development; Mihály Varga who at last is free from his duties as chief negotiator with the IMF; Péter Szijjártó who lately behaves as if he were the foreign minister (as he is except in name); and Csaba Baji, the CEO of the Magyar Villamos Művek Zrt. (Hungarian Electric Power Co.) On the Russian side, besides Putin, the Russian minister of agriculture and the CEOs of Gazprom, Rosatom, and Vnesheconombank were present.  Vnesheconombank is commonly called the Russian Development Bank. The institution is used by the Russian government to support and develop the Russian economy. 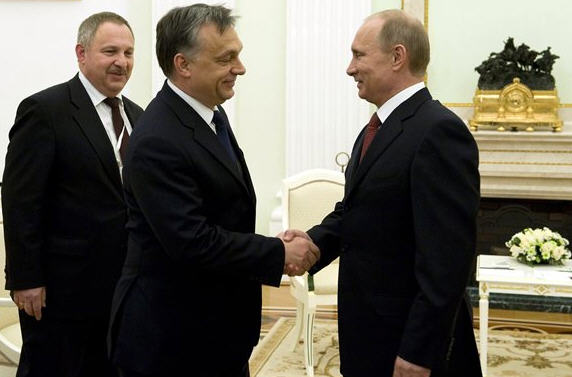 Putin turned out to be a gracious host, at least on the protocol level.  He was “very glad that [Viktor Orbán]  finally took advantage of this invitation to come to Moscow.” He announced that he considered Hungary a priority partner in Central Europe, especially on economic matters, “because, after all, after Germany, Russia is the most important trading partner of Hungary.” Putin noted that an avenue in Budapest was named after Lev Nikolaevich Tolstoy. He naturally neglected to mention that Moszkva tér in Buda lost its name at almost the same time. He ended his speech with “We have been waiting for you in Moscow. … Welcome back!”

Orbán was equally expansive. He talked about Hungarian admiration for Russian culture and praised Russian achievements profusely. He made sure that Putin understands that he is aware of Russia’s economic and political importance:  “We believe that Russia is a great power. It has not only a great past, but also a great future. So it is obvious that  Hungary has a keen interest in maintaining a fruitful and close cooperation with Russia.” He also welcomed Russian investment in Hungary.

Putin added a little dig. Or at least I interpret it this way. Picking up on Orbán’s reference to Russian culture, Putin in his brief answer noted the multinational nature of the Russian Federation. Among the components of this ethnic mix are the Finno-Ugric people to whom the Hungarians related. He indicated that there will also be Russian-Hungarian cooperation in that field. So, forget about Kazakhstan!

Véleményvezér, one of the leading Hungarian-language blogs, entitled its post “Viktor Orbán, Putin’s new little kitten.” As for the Hungarian opposition’s response, I will deal with that topic tomorrow.