For over two days now I have been trying to explain the situation that developed in Hungary as a result of the blizzard to an American friend of mine. Her reaction has been: “OK, Eva, start over again. This doesn’t make any sense.” Then I begin my story again and the answer is: “Sorry, I still don’t understand. Why didn’t they close the roads as soon as it became obvious that there are 30-km traffic jams on very important roads in the country?” Or, “One doesn’t wait until that much snow falls but begins clearing the roads at intervals throughout the blizzard.” Well, indeed, at least in a well organized country prepared to handle all sorts of snow events. For example, the Burgenland, the eastern province of Austria adjacent to Hungary, was hit by exactly the same snowstorm but somehow within a relatively short time all the roads there were cleared.

Around here after a certain amount of snow falls (2″ in our town) the plows start working. I remember many a time that I was caught in a snowstorm on the Massachusetts Turnpike but, even as the snow fell, the plows were hard at work making sure that at least one lane was clear. During and after the last huge snowstorm there was a total ban on driving in Connecticut so that the 100 cm of snow that fell (at least in our town) could be cleared and transported off the roads. In comparison, in Hungary only 15 cm fell on March 14. So, why the chaos?

I read all the reports I could lay my hands on and came to the conclusion that the so-called Országos Katasztrófavédelmi Főigazgatóság (National Catastrophe Agency), a newly created organization, failed miserably. They reacted far too late to the storm that was very accurately predicted way ahead of time.

But that wasn’t the only problem. Officials of the Orbán government did what they do all the time. They lied in order to convince the Hungarian people that they had the situation well in hand. “Success” propaganda was spread far and wide with the disastrous consequence that people were misled and thought that the roads were clear, just as they had been told. Of course, they were not and therefore some people who thought that driving was safe ended up spending as many as 20 hours in their cars without provisions. Total chaos resulted but the government still had time to make a video in which the “dear leader” and his minister of interior just happened to pick up a young couple from Transylvania of all places and give them a lift to their truck. Interestingly, the couple didn’t seem to know that the driver was Viktor Orbán and that next to him sat Sándor Pintér. They also seemed oblivious to the cameras. Mátyás Eörsi, formerly SZDSZ now DK politician, called the video “stomach turning.”

The blizzard began early in the afternoon of March 14, but Sándor Pintér announced a snow alert only around 9 a.m. on the 15th. By that time tens of thousands were stuck on the highways. Some people talk about 30 km, others 100 km traffic jams. A couple of hours later the army was called out and a few hours after that Csaba Hende, minister of defense, proudly announced what a great job his soldiers were doing. Meanwhile the people half frozen in cars couldn’t get any information. Either the lines were jammed or the websites were unreachable because of traffic overload. If (rarely) they saw a policeman and asked what was going on, they were told that he is the last little link in the command chain and he has no idea what’s going on a few kilometers ahead. If the people managed to get through on their cell phones, different sources gave them contradictory information.

The nationwide alert system the National Catastrophe Agency instituted only a few months ago that would have informed the population of the serious situation that had developed was never used. When asked why not, Pintér’s answer was that the situation wasn’t nationwide and therefore there was no need to activate the system. Pintér, just like Hende, was extremely satisfied with the work of the police and the Catastrophe Agency. The people are to blame for starting off in the first place. Never mind that they didn’t receive any information about the severity of the situation.

Many critics point out that one of the problems is the extreme centralization of the whole system, including the police force. The only person who could have declared a state of emergency was Sándor Pintér, but as we learned he was busy at an event that celebrated the promotion of twelve officers of the National Catastrophe Agency. The gathering took place on the evening of March 14 when the crisis on the road had already been under way for hours. 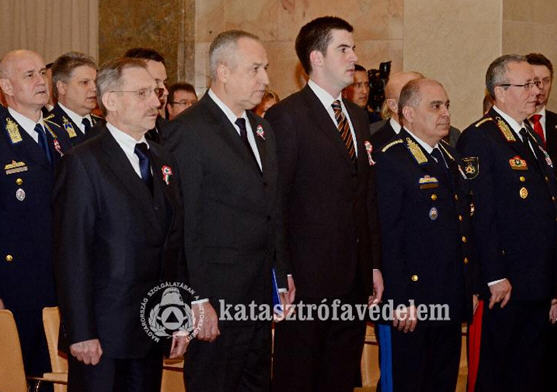 Officers of the National Catastrophe Agency are very satisfied with their performance, March 14, 2013

György Bakondi, the new head of the Agency (far right), apparently has absolutely no experience in handling emergency situations. He is a lawyer with a dubious past. There was talk about investigating his financial affairs after 2002. More recently he was involved with the notorious UD Zrt. that was suspected of illegal spying on behalf of Fidesz. So, he was paid off with an important job and a fancy uniform and title. The reorganization of the system also meant getting rid of 800 experienced people and replacing them with Fidesz loyalists. In November 2012 the firefighters addressed an open letter to Viktor Orbán and Sándor Pintér in which they expressed their belief that Bakondi was unfit for the job.

I just heard an interview with Bakondi and my impression was that not only does he know nothing about what to do in case of an emergency, he is also not the sharpest knife in the drawer. When asked why they didn’t forbid trucks from entering the country, his answer was that it is impossible to tell people that they cannot enter Hungary. To the question why they let Hungarian passenger cars on the roads this bright shining light of the Fidesz administration announced that every Hungarian can go anywhere he wants! The government cannot prevent their free movement!  These kind of people run Hungary nowadays and therefore one mustn’t be terribly surprised that everything is done in a totally incompetent manner. Because people are not hired for their expertise but for their loyalty to Fidesz and Viktor Orbán.

And here is snow removal Hungarian style. Surely attacking a massive snow storm with shovels is a hopeless task. 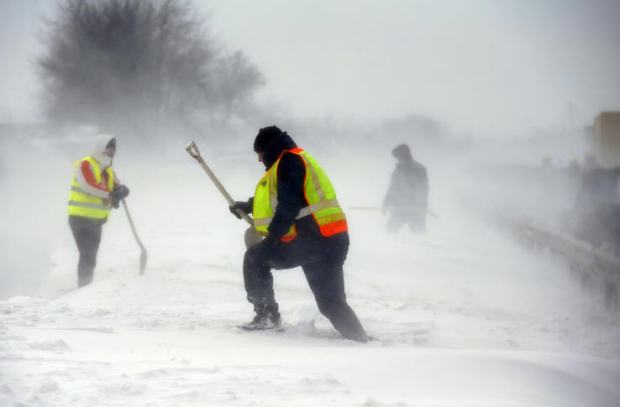 We can now wait for another rewriting of history Fidesz style. The question is how the Orbán propaganda can make a success story out of this sorry affair. Those people who read only government papers or who listen only to Magyar Rádió or watch only Magyar Televízió have already been treated to self-congratulatory stories. How fast and with what great efficiency the police, the army, and the National Catastrophe Authority did their jobs. I just heard Pintér say that Hungary handled the snowstorm much better than any other country in Europe. But how long can such success propaganda be maintained? I hope not for long.