No, just to clarify the title of this post, the Hungarians didn’t really lose (they tied), but since they were so convinced that they would win, they considered the game a loss–and an unfair one at that.

So, the match took place in an empty stadium and the final score was 2:2. A great disappointment for the Hungarians because they were certain that they would win over the Romanians, whom they considered to be a weak team. I don’t know where this optimism came from because in the last thirty-two years the Hungarians were unable to win a single game against the Romanian national team. But as I said, I’m no expert; I know next to nothing about the strengths and weaknesses of these teams. What I would like to talk about here is the attitude of Hungarian commentators to the tie. I think it may explain a few things about the Hungarian psyche. 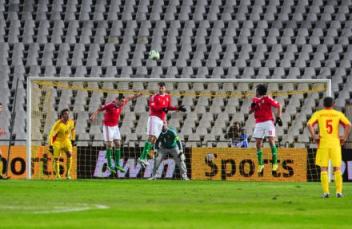 I should mention a few facts about the game itself. If I understand it correctly, there were two penalty kicks, one from the Romanian and the other from the Hungarian side. The match went into overtime, and the final Romanian goal was kicked in the ninety-second minute of the game.

Here are some comments from Hungarian sports journalists and the players themselves.

One of the first detailed analyses appeared a few minutes after the match was over. The title is telling: “It was in the ninety-second minute that the Romanians stole two points.”  A few minutes later: “We were unlucky: Instead of victory it is a tie against Romania.” The article itself reports that the Hungarian team played very well, but the Romanians “with fantastic luck in overtime managed to tie the game. It was a fluke!” So, the Hungarians were excellent, the Romanians were incredibly lucky, and the last goal was a fluke.

One of the players, Vilmos Vanczák, who actually scored the first goal, told the journalist of Nemzeti Sport that “we were very close to victory but unfortunately that little plus is still  missing in becoming a really great team.”  He belittled the opponents. He claimed that “we dominated the game all along. The two goals scored against us were the result of inattention. We led all through, but at the end victory slipped from our hands….. I expected a much better Romanian team…. At the next game in Romania we have a chance.” So, they were much better than their opponents but victory somehow eluded them.

The goalie, Gábor Kiráy, blamed the lack of an audience and the chanting of the fans in the stadium. “If we had had an audience, they would have helped us over the tipping point.” Coach Sándor Egervári said: “We lost two points after a game that had been won.” In my opinion, one either wins a game or doesn’t. You can’t have it both ways. Király admitted that he didn’t even see the ball when Alexandru Chipcio scored the final goal of the game. Yet he tried to find excuses: it was windy and the ground was wet. Mind you, the opponents played under exactly the same conditions.

By this afternoon some of the Hungarian players came to the conclusion that neither Romanian goal was legit. Both had been preceded by misconduct. So, the Hungarian team should have won 2:0. Molcsapat.hu intimated that the referee was partial to the Romanians. The journalist talked about the “friendly disposition” of the German Wolfgang Stark that allowed the two Romanian goals.

The Romanians seem to be more generous toward their opponents. Adrian Mutu, who kicked the Romanian penalty goal, was very satisfied. “We must be satisfied with the results because we played against a very good team. … It will be difficult to win against the Hungarians in Bucharest.” HVG wrote that, according to Romanian sports reports, the Romanian national team was very lucky not to lose to the Hungarians. Romanian sports journalists, in fact, sharply criticized Coach Victor Piturca. Gazeta Sporturilor called the last goal “miraculous.”

Perhaps the Romanians were simply lucky, perhaps objectively the Hungarians were the better team. But, on the day, the Hungarians couldn’t pull it off. And that, in sports, is all that counts. That and, oh yes, sportsmanship.

The Hungarians will be going to Istanbul to play against the Turkish national team that just won against Andorra. The general Hungarian attitude toward this game is optimistic. Nemzeti Sport claims that “for the Turks Hungarians will pose the real challenge.” It will be during this game that the true strength of the Turkish team will be tested. On the website readers can vote on what they think the outcome of the game will be. Over 50% of those who voted are certain that the Hungarians will win. And here we go again.