This morning after reading the transcript of a conversation between the prime minister and István Tarlós, the mayor of Budapest, I decided to devote today’s post to it. It’s a rare piece of “documentary evidence” about the inner workings of this government. After all, even historians decades hence will not be able to hear or read what transpired at cabinet meetings. In those terrible socialist-liberal days cabinet meetings were taped and transcribed. A hundred years ago there were at least short summaries of cabinet meetings. Now only the participants know what happened in these meetings.

Let’s start with the occasion for this conversation. Budapest, thanks to the “generosity” of the Orbán government, will be getting 150 sorely needed Mercedes-Benz Citaro buses. The first fifty arrived, and today they began their scheduled runs on certain bus lines. It was a few months ago that I read with some interest that Tarlós himself decided on the color of the buses. I looked at a number of Citaro buses from different cities, and I must say that the ones in Budapest will be unique all right.

The ceremony began with the usual Orbán speech about a strong Hungary and a strong Budapest. He expounded on the fantastic achievements of his government and its blessings on the capital. Three years ago the city was full of stories about a Nokia box stuffed with stolen money, but now the talk is about buses. Never mind that the story of the Nokia box was a figment of the imagination of a frightened witness against Miklós Hagyó, MSZP deputy mayor of the city.

After the brief ceremony the prime minister, the mayor, and other officials and newspapermen had a fairly lengthy ride from Heroes’ Square to Deák Square. Orbán and Tarlós stood in the aisle close to the bus driver, a woman. Népszava published an article headlined “Orbán can create laws for anything.”

Here is part of the conversation.

V.O.: Hey, István, do these houses still belong to the Ukrainians?

I. T.: I didn’t even know that they were owned by Ukrainians.

V.O.: I read something about Ukrainians….

I. T.: The Ballet Institute belongs to the Portuguese.

V.O.: It belongs to a Portuguese individual and I want it back.

I.T.:  Isn’t there some kind of law that it cannot be done for twenty years …?

V.O.: Why don’t we create one? The city could propose it and I will create one.

I.T.: One must have a law for it. A city ordinance is not enough.

V.O.: Initiate the enactment of such a law and I will create one.

V.O.: Just give me a proposal. I can’t figure it out instead of you.

I.T.: Mr. Prime Minister, could we turn in a couple of bills?

V.O.: Don’t try to be too greedy. We are talking about one. Turn it in! 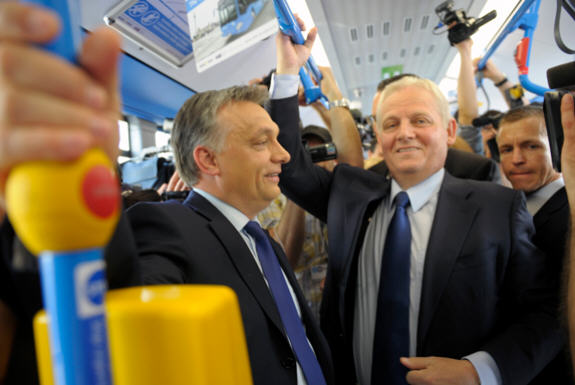 About facades that would need refurbishing:

I.T.: If we hadn’t built the Metro #4 we could have fixed up the facades in Districts V, VI, VII and VIII completely.

V.O.: I’ll tell you what Gábor Bethlen [Prince of Transylvania, 1580-1629] did in Transylvania. When he was elected prince he went around the country and saw that the houses were in disrepair. He declared that within one year every owner of a house must fix it up; otherwise they would see what happens.

I.T.: Will you give me such freedom?

V.O.: If it is a question of permission, we will think about it if I get a proposal from you…. Something must be done.

I.T.:  In May that proposal will be turned in.

At the Anker House:

I.T.: Look at this building. It has been in this deplorable state for the last twenty years.

V.O.: But why, István? You see this building every day…. Why do you allow it?

I.T.: The problem is that it is not ours.

V.O.: You are not the owner but you are the mayor. Order them to fix it up! [In the original: Rendeld el, hogy legyen rendben!]

I.T.: Zoli, let’s not forget that the prime minister would like an amendment to the municipality law. We will turn in a recommendation.

I know that this text sounds like something from The Onion. Alas, it’s not.