After less than a day of very hard work getting everything installed and tweaked on my new computer I’m up and running with only minor temporary inconveniences. So, it is time to return to my daily routine of  monitoring the Hungarian media. Today I’ll concentrate on the Tavares report that was prepared for a vote in the European Parliamentary Committee of  Civil Liberties, Justice and Home Affairs (LIBE).

You may recall that I left off with the approximately 500 amendments to the draft report, of which about 200 were submitted by Fidesz MEPs and a Slovak and a Romanian member of parliament of Hungarian nationality. The vote was scheduled for June 19.

Given the enormous number of amendments, Hungarian newspapers predicted that the session would be very long, taken up with debating each of the submitted amendments, and they seemed to be surprised that after only two or three hours it was all over. They also emphasized that the committee was highly divided on the issue and so the vote one way or the other would be very close. That prediction also turned out to be erroneous. Of the 58 people present (the committee has 60 members) 31 voted for the report, 19 against it, and 8 abstained. I wouldn’t call that exactly close. In fact, observers in Brussels were somewhat surprised at the outcome. They expected a much closer vote, considering that half of the members come from either the European People’s Party (EPP) or the group of conservatives and reformers.

Kinga Gál (Fidesz), one of the deputy chairmen of LIBE, immediately announced that it was a lie that some EPP members voted for the Tavares report, adding that a few of them abstained. But the numbers don’t add up. Someone from that group had to endorse the report. After all, there were 29 right-of-center MEPs present. But even Fidesz MEPs had to admit that, in spite of very heavy lobbying, they failed to alter the text of the original proposal in any significant way. Most of the Fidesz amendments were thrown out.

One substantive suggestion came from the chairman of LIBE, Juan Fernando López, who proposed some additional text. He suggested that a serious investigation of the new Hungarian election laws be undertaken and that the Office of Human Rights actually monitor the forthcoming election. Quite a blow for a member country of the European Union. A first.

It seems that some Hungarian MEPs felt compelled to make a scene. I guess nobody who knows anything about Krisztina Morvai (Jobbik) will be terribly surprised to learn that she managed to wreak havoc in the committee meeting. Morvai is not a member of LIBE, she was there only as a spectator. Just before Chairman López called for a final vote, she interrupted the proceedings. She  denied the legality of the procedures followed by the committee and held up a poster reading: “The European Union is a dictatorship.” López warned her that “the European Parliament is not a circus.” 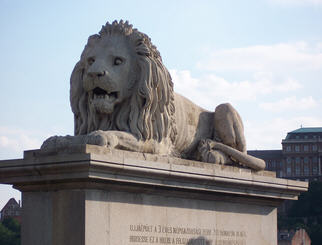 The toothless lion of the Chain Bridge, Budapest commons.wikipedia.org

As it turned out, some members of the Alliance of Liberals and Democrats were convinced that Morvai was a Fidesz MEP; after all, her arguments in defense of the Hungarian government’s position were identical to those articulated by Enikő Győri, undersecretary in charge of European Union Affairs, except Győri used milder language. She called the report “deeply biased” and claimed that even the report’s facts don’t stand up to scrutiny. The committee discarded corrections of factual errors that EPP members submitted to the committee. Therefore, the Hungarian government still cannot subscribe to the report’s conclusions. She contended that the report is a political document that was heavily influenced by party politics. After all, she claimed, European parliamentary elections will be held next year and therefore it was predictable that the split in the committee was entirely along party lines. As we have seen, Győri is not exactly reliable on this point. Her verdict was that “the committee clearly overstepped its authority.”

As for the Tavares report, it is no more than “a party dictate of the European Left.” As far as the Fidesz delegation is concerned, this document is simply unacceptable. In any case, it is the end of the excessive deficit procedure that really matters and that was approved by Ecofin today. The delegation also expressed its optimism concerning a satisfactory resolution to the Hungarian government’s debate surrounding the fourth amendment to the new Hungarian constitution which, they are certain, will end in Hungary’s favor. I find this last prediction just a bit premature considering the very strong condemnation of the latest constitutional amendments by the Venice Commission, which is comprised of internationally renowned constitutional lawyers.

There is no question that the adoption of the Tavares report is a severe blow to the Hungarian government. The answers referencing bias, party politics, and the European Parliamentary election next year sound hollow, especially if one takes the trouble to read the Tavares report or the opinions of the Venice Commission.