Today I read an editorial in Magyar Nemzet on the fate of Silvio Berlusconi.  It seems that Anna Szabó, the author, who is a great admirer of Viktor Orbán, forgot that the Hungarian prime minister is a friend of Berlusconi. Because she found Berlusconi’s sentence far too lenient and expressed her utter astonishment that the Italians, although they have long known about Berlusconi’s “dirty affairs,” only now were ready to punish him for his sins.

In the final paragraph of the editorial Szabó bemoans the fact that in Hungary many corruption cases have gone unpunished, pointing the finger at Ferenc Gyurcsány and Gordon Bajnai. She lists among their sins the fate of the Posta Bank, MSZMP’s former retreat in Balatonőszöd, the Budapest Airport, and “stealing parts of Lake Velence’s shores.” In case you draw a blank, it was at Lake Velence that the Israeli businessman Joav Blum and his American partners who included  Ronald S. Lauder hoped to build a luxury hotel and a casino.

If I were Anna Szabó I wouldn’t mention these cases right now because practically all the accusations she hurls at the former prime ministers are without foundation. On the other hand, in recent days Hungarian newspapers have been full of descriptions of certain business activities of members of the Orbán family that are suspect.

I am not an overly suspicious person. In fact, I can even be called naive when it comes to questionable business deals. On the one hand, I’m inept in business matters and, on the other, since I’m not in the habit of cheating or stealing from others I find it very difficult to imagine people whose daily activities include such shady activities.

I have encountered people over the last twenty years who have floated fanciful stories about Fidesz and the “boys.” I know a woman who to this day is convinced that a group of MSZMP leaders allowed the formation of Bibó College, the dormitory where Fidesz was born, in order to develop “trustworthy cadres” who would eventually be entrusted with salvaging the Kádár regime’s essential features. Well, I think this is madness.

On the other hand, I take much more seriously the persistent allegations that seem to be well founded about the money Fidesz got from the sale of the building the party received from the Hungarian state in 1992. Here only one thing is not entirely clear. How much of the 750,000 million (in 1992!!!) remained in the party coffers and how much disappeared into private pockets. We know only that László Kövér didn’t allow top party officials to take notes while Viktor Orbán tried to explain the distribution of the money among various Fidesz companies. But Klára Ungár, who was by that time highly suspicious of the activities of Lajos Simicska, László Kövér, and Viktor Orbán, tried to keep the figures in her head. She found that at least 170 million was missing from the total. We also don’t know what happened to the rest of the money that was invested in several companies that were eventually liquidated under very suspicious circumstances.

It is also another fairly well established fact that some of the money went to help Viktor Orbán’s father, Győző, purchase the state quarry he ran before the change of regime. It was this quarry in the village of Gánt that established the Orbán family’s fortune. Since then Győző Orbán has been able to add various enterprises to his original business and has become very rich indeed. According to Krisztina Ferenczi’s calculation, two of the businesses in which the older Orbán has a majority share (the quarry in Gánt and a company that produces peat) netted 2,192 billion forints last year. In addition to these two companies, there is another one that is owned exclusively by Viktor Orbán’s father and his two young brothers. That company was also profitable, bringing in an additional 400 million. 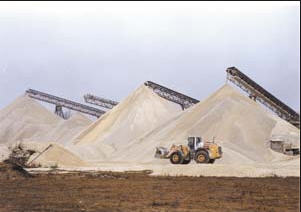 The Orbán Quarry in Gánt

Győző Orbán also owns land in Felcsút adjacent to a parcel of land owned by Viktor Orbán. The VIP parking area of the Aranycsapat Stadium will be located on this piece of land. (Aranycsapat means Golden Team, the nickname of the Hungarian team that became world famous in the mid-1950s and on which Ferenc Puskás played before he left Hungary after the 1956 Hungarian revolution.)

The prime minister’s father also purchased part of the former estate of Archduke József of Habsburg. The summer palace of the Hungarian Habsburg family was destroyed during the war and the 7,000 acres that went with it was distributed among the local landless peasants. Only the manor house and 13 hectares were retained by the Hungarian state. Perhaps we shouldn’t be terribly surprised that both the manor house and the 13 acres ended up in Győző Orbán’s hands. As far as I know, the manor house is under renovation. Rumor has it that it is being converted into a luxury hotel.

And then there is the Orbán family’s controversial peat business. The first mention I found of the marshlands that are necessary for peat production was in the March 5 issue of HVG. Bernadette Szél (LMP) discovered that Fidesz was preparing a bill that would lift the protection of marshlands and allow the mining of peat.  By July it became public knowledge that the prime minister’s father and two brothers already owned about 200 acres of marshland in the County of Zala. Győző Orbán purchased the land in 1999 during the premiership of his son. The head of the Mining Authority was for a while a silent partner in this peat business. They and others purchased the land for practically nothing. In 2003 the area was declared to be protected, destined to be converted into a national park. All of the landowners were forced to sell their land to the state, with the exception of the Orbáns.

Bernadette Szél went to look at this land, which consists of several thousands of contiguous hectares of marshland. The Orbáns’ 200 acres that presumably were so different from all the others lie in the middle of this large area. It seems that the Orbán company will have a peat mining monopoly in these parts. At the moment the company, in addition to mining, is building a helicopter pad. Business is good. In 2012 there was half a billion forint profit.

And, as people say, “if we just knew the whole truth.” I think we would be astonished at the depth of corruption of the man who is currently the prime minister of Hungary.