It can easily happen that, amid the frenzy of Fidesz legislative action over the last three and a half years, even the more observant among us misses a troubling piece of legislative action. Here is one that I at least missed. It was included in the new electoral law of 2011, officially called the Law on the Election of Members of Parliament. For the most part Law CCIII provides a description of the newly created electoral districts, and it was on these gerrymandering efforts of the framers of the bill that I initially concentrated. Yesterday a friend called my attention to an interview with Aladár Horváth, a Roma political activist, on ATV’s program ATV Start.

At the time of her telephone call I still hadn’t had a chance to see the program, but I was told that Aladár Horváth is urging his fellow Roma not to register as such because so identifying themselves will deprive them of their right to vote for party lists. The Electoral Law on the Election of Members of Parliament, ¶7§(2), reads as follows: “A citizen who belongs to a minority can vote a) for a candidate of his electoral district and b) for the list of his own nationality.” In brief, as opposed to a non-minority citizen who can vote for both a candidate and a party list, a citizen who registers as a member of a minority can vote for a local candidate and the minority list.

The Venice Commission’s draft opinion on The Act on the Elections of Member of Parliament of Hungary welcomed this particular aspect of Law XXIII. “For the first time, special provisions aimed at favouring the participation of national minorities in parliament in the electoral legislation. . . therefore the Venice Commission welcomes the introduction of such provisions.” However, the Venice Commission seemed to have some concerns regarding the new situation faced by the minority voters. It recommended that “as voters have the right to choose between registering to vote for normal party lists or national minority lists, the law should allow such registration in a reasonably short time frame before election day. This would ensure that all voters have sufficient information to make an informed choice. However, it would be preferable to give to the voters from national minorities the possibility of choice on election day between nationality lists and party lists.”

I guess I don’t have to tell you that no such opportunity will be given to minority voters either at the time of registration or on election day. Moreover, it is very unlikely that the Roma population, undereducated and living in backward villages, will realize the pros and cons of opting for the party list versus the minority list. After all, even Viktor Szigetváry, Együtt 2014’s electoral expert, when he wrote about the new electoral system didn’t pay much attention to this particular provision of the new law. He did admit that voting for the minority list “in small measure will strengthen the majoritarian character of the whole system” but he obviously didn’t consider it a potentially serious problem.

I checked the number of people who registered in 2010 to be able to vote for minority lists in local elections. Their number is over 200,000. Under the 2011 law they will now be deprived of their right to vote for a party. Or to be more precise, by voting for the minority list they will de facto be voting for Fidesz.

The leading members of Lungo Drom,  the  representative body of Hungarian Gypsies, including the head of the organization, Flórian Farkas, are Fidesz puppets. So any Gypsy who votes for the current ethnic leadership will only help Flórián Farkas be reelected to parliament. It would be one more vote for Fidesz. 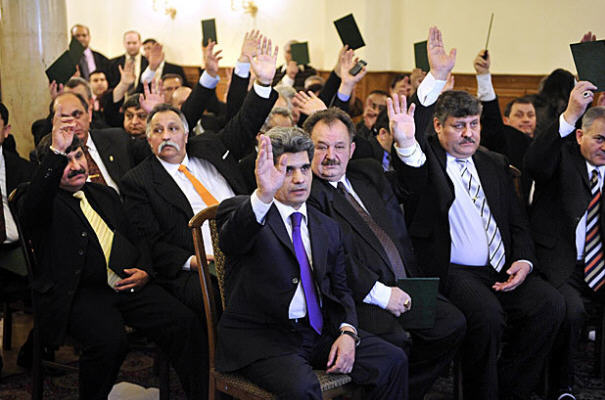 Farkas is an old ally of Viktor Orbán who has worked closely with Fidesz ever since 2001 when he was already the president of Lungo Drom. He signed an agreement with Fidesz-MDF at that time in which he pledged Lungo Drom’s support of these parties. After the split of MDF and Fidesz, Farkas stood by Fidesz and renewed the electoral agreement between the Roma organization and Fidesz. He has been a member of the party’s parliamentary caucus ever since 2002. He is known as someone who does nothing whatsoever for the Roma community even though he is also head of the Országos Cigány Önkormányzat (OCÖ or Nationwide Gypsy Self-government).

So, this is the situation to which Aladár Horváth called attention. The problem is that his message is pretty much lost in a sea of total indifference. For example, he gave a press conference which not even the reporters of the liberal-socialist press bothered to attend. Although he himself is making an effort to get to the Roma communities, it is unlikely that he and his friends will be able to enlighten the Roma minority about their choices and the consequences of their decision.

We can be sure of one thing. Fidesz doesn’t do anything that doesn’t serve its own interests. Just as they don’t really care about the Hungarian minority in the neighboring countries so they don’t care about ethnic minorities inside of Hungary. Their primary concern is to get extra votes from the mostly Fidesz sympathizers in Romania and Serbia and to ensure that by default the Roma end up supporting them. The rest is just talk.