Just the other day Hungarian Transparency International released a study on the “Lack of Transparency in Hungary’s Higher Education.” This title is somewhat misleading because the main emphasis is on corruption in higher education and in the student unions, Hallgatói Önkormányzatok (HÖK). Five hundred students were interviewed in a questionnaire survey, and a number of in-depth interviews were conducted with teachers and administrative professionals. According to the students, it is in politics that corruption is the highest but it is also present, even if not to such an extent, in higher education. Thirty-two percent of students believe that the teaching staff is not at all or only partially honest. Twenty-six percent question the integrity of the admission committees, and 46% doubt the honesty of the student council/union.

Let me concentrate on the student councils here. The HÖKs were set up with generous support from the government in the early 1990s when politicians in their democratic zeal felt that students, just like every other group, needed their own self-governing institution. They were given both funding and wide-ranging privileges. They could offer financial assistance to students in need. They also had jurisdiction over the dormitories. And they had the right to vote on the appointment and promotion of professors.

Quickly enough some students discovered the benefits of attaining high positions in the student union, including substantial personal monetary benefits. As a result, it was not always the most honest men and women (mostly men, I’m afraid) who vied for these positions.

These student unions became incubators for future politicians, especially those who eventually ended up in Fidesz. Fidesz in the 1990s was extremely popular among students, and eventually the whole leadership of Fidelitas, the junior branch of the party, underwent their political apprenticeship in student unions of various universities. Since then, with the rise of Jobbik, in some universities Jobbik took over the student unions. You may recall that at the Faculty of Arts of ELTE the Jobbik leadership of HÖK picked out “the most promising” (i.e., most likely to join Jobbik) freshmen. This crew had a running list of entering freshmen and made special mention of who might be a Jew or a left-winger.

A leadership position in HÖK could have been good preparation for an honorable political career. These student leaders had to negotiate with the faculty and the university administration, and in theory they were supposed to defend the rights of the student body. Unfortunately their primary concern was to fill their pockets and acquire more and more power. In the study half of the students claim that members of the student union ask for money, gifts or favors from those who request a place in the dormitory or social assistance. The financial affairs of the student union are unregulated and opaque.

The corruption of the budding Fidesz-Jobbik student leaders practically guaranteed that when they found themselves in more important political positions they would carry on their shady business, only on a much grander scale.

Perhaps the most notorious HÖK was at the University of Szeged where in early 2011 there was practically a student revolt to get rid of the corrupt HÖK members. There, as István Tanács, Népszabadság‘s Szeged correspondent wrote, “instead of student autonomy HÖK had a potential for blackmail of the administration.” About 600 students, freshmen and sophomores, naive souls, signed a petition demanding more electoral transparency. Their demands were modest: they wanted the votes collected to be kept at night in the safe of the Dean’s Office and not in the office of HÖK. They wanted a public notary to be present when the results of the election were counted. They also demanded a completely new election for all positions and not individual replacements of students whose term of office was ending. 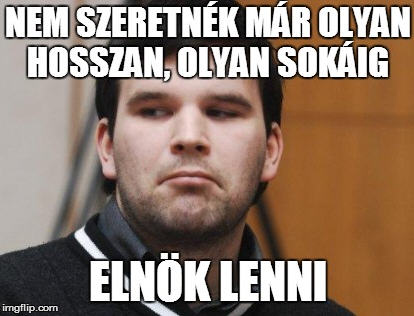 “I no longer want to be chairman for that long” — Márk Török, the notorious chairman of the Szeged HÖK

The leadership of the Szeged HÖK managed to fend off the attempts at undercutting their power within the organization. That could be done relatively easily because the heads of the student unions are not elected in a truly democratic manner. In fact, the HÖK in Szeged is organized in such a way that its president has absolute power and the university’s administration has no say whatsoever over its affairs. The university’s senate accepted that arrangement as well as the demand of HÖK that this provision can be changed only with the approval of the student union.

So, the younger Fidesz leadership, and these people by now are probably in their early forties, often comes from these student unions where for years they were masters of manipulation and where they enjoyed unquestioned, concentrated power. We shouldn’t be surprised about the atmosphere that pervades the party. In addition, let’s not forget that Viktor Orbán and his buddies come from a very similar background. When they were at university they spent more time politicking than studying. They managed to achieve self-government within their small dormitory and ran the show with practically no supervision.

While I think that political activity should be part of university life, I also think that the power of HÖK should be broken once the electorate gets rid of those who brought into Hungarian political life the institutionalized corruption learned already in college.