Time to move from the past to the present. From Viktor Orbán’s personal enrichment to the much greater sins he is committing today. I would like to call attention to something that didn’t receive the attention it deserves in the Hungarian media: a small item in the new electoral law that makes it easy for new Hungarian citizens from the neighboring countries to vote while practically depriving about half a million Hungarian citizens who temporarily work abroad of the right to vote.

How can this be when we’ve heard so often from government politicians that there cannot be two different kinds of citizenship? The Hungarian government cannot grant citizenship to people of Hungarian heritage without giving them the right to vote even if they have never set foot in present-day Hungary. This argument, advanced by Fidesz and the Orbán government, makes some sense. But what kind of sense does it make that people from other countries who just received their citizenship can vote by absentee ballot while those who became Hungarian citizens by birth cannot? Because this is what is happening. And as with everything else, Viktor Orbán knows what he is doing.

On October 25 an article appeared in Népszava about a document the newspaper received that attests to the disparate treatment of new and old citizens living and working abroad. János Kiss from Romania who just got his citizenship and passport can sit in the comfort of his living room in Chicago and vote by absentee ballot. By contrast, József Nagy, who was born in Mátészalka and finished his schooling in Hungary and who also lives in Chicago, can vote only by traveling to the Hungarian embassy in Washington or one of the consulates in San Francisco and New York. Take your pick. The situation is just as bad in the United Kingdom where bona fide Hungarian citizens might have to travel from the northernmost point of Scotland to London to vote at the Hungarian embassy while their lucky new compatriots would have to go no farther than the closest mailbox.

According to the Central Statistical Office, 7.4% of Hungarians between the ages of 18 and 49 work abroad. These people have permanent addresses in Hungary. There are various estimates of the true number of people who have left Hungary to seek their fortunes elsewhere. We hear of 100,000 Hungarians living in London alone. Emigration to Germany has accelerated of late and the same is true about Austria. All in all, there might be as many as half a million Hungarians living abroad. Although theoretically these people can vote, in reality they are unlikely to go to the lengths necessary–often involving both time and money–to cast their ballots.

The decision to distinguish between new and old citizens is not a coincidence or an oversight. Viktor Orbán and his cohorts figure that the new citizens, who are intrinsically more conservative than the adult population of Hungary proper, will vote overwhelmingly for Fidesz. After all, they received their Hungarian citizenship from this government. They are not at all sure of the recent émigrés’ party preferences. They left the country either because they couldn’t find a job or because they found the atmosphere oppressive. Recent émigrés complain about the lack of meritocracy in Hungary which works against those without “connections.” If these people could vote by absentee ballot, who knows what the results would be. So, let’s make sure they don’t vote. I’m sure that’s how the argument goes in Fidesz circles.

After October 25 I was waiting with great interest for the reaction to Népszava‘s revelation. I was disappointed. There was not a word about this outrageous discrimination for quite a few days. At last on November 1 Hir24.hu came out with a four liner with the headline: “It will be mighty expensive for people working abroad to vote.” Surely, the reporter didn’t grasp the true significance of the provision. At the end of the article it was mentioned that, according to the Hungarian Civil Liberties Union (TASZ), this part of the electoral law is unconstitutional.

TASZ may have found the provision unconstitutional but according to Róbert Zsiga, a Fidesz spokesman, the law did not change the voting status of Hungarians working outside the country. Prior to the enactment of the new electoral law Hungarians who were abroad at the time of the election could vote only at embassies and consulates. That is still the case. He forgot to add that in the past there was no such thing as absentee ballots for new citizens. 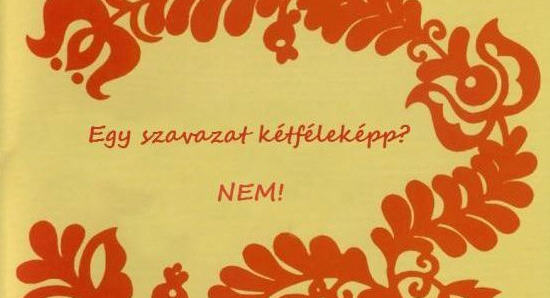 Századvég, the think tank that has been receiving billions of forints worth of government orders in the last three years, immediately announced that there can be no constitutional objections to the law. According to Balázs András Orbán, it would be possible to talk about discrimination only if some people in the same homogeneous group had different rights from others. But here we are talking about two groups with two different sets of rules.

I’m no legal expert, but I find this particular line of reasoning bonkers. So did TASZ, who summed up their reasoning in the headline: “Either to everybody or to nobody.” At the same time a Hungarian citizen, represented by TASZ, turned to the Constitutional Court for remedy. TASZ’s argument can be read here. As of today the Constitutional Court hasn’t responded to TASZ’s brief.

With the exception of DK the opposition parties somehow managed to miss the news of this gross discrimination. DK submitted an amendment to the electoral law on December 4 which would give all Hungarian citizens living abroad the right to vote by mail. Csaba Molnár, deputy chairman of DK, also approached the new Fidesz-appointed ombudsman, who has the right to turn to the Constitutional Court with cases raising constitutional issues. Molnár received a letter about two weeks later from the ombudsman, László Székely, who naturally found nothing wrong with this provision of the Fidesz electoral law and therefore refused to ask the Constitutional Court’s opinion on the matter. According to Székely, as long as all citizens have the right to vote, the “method of voting is not a constitutional matter.”

So, this is where we stand. It looks as if the Hungarian opposition must turn to international organizations, for example, to the Organization for Security and Co-operation in Europe or to the European Court of Justice. An opinion piece written by a lawyer, László Szlávnits, suggests that if there is no remedy to this incredible provision of the electoral law the opposition should seriously consider boycotting the elections.