Let me start with a disclaimer. In a comment I gave details of the negotiations currently underway among the politicians of MSZP, Együtt-14, and DK. I should have been more circumspect because the information came from Heti Válasz. Although it is the least objectionable of the pro-government publications, that doesn’t mean that one ought to believe everything that appears in it. Heti Válasz claimed to know that MSZP will have 66 districts while E-14 and DK will have 20 districts each. The paper reported that the list will be headed by Attila Mesterházy to be followed by Gordon Bajnai, Ferenc Gyurcsány, and someone from PM. Well, it turns out that although the negotiations are proceeding well, the participants are far from a final agreement. 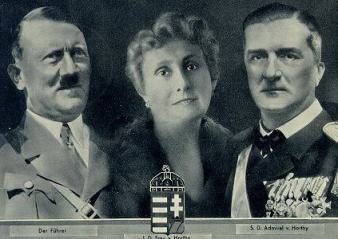 Berlin postcard 1938, issued to commemorate the meeting between Hitler and Horthy

And now to today’s topic. As all active readers know, my post on the events of 1944 created an incredible number of comments. I wrote in response to the government’s idea of erecting a monument to Hungary’s “occupation” by German forces. My summary was largely based on the final chapter of Krisztián Ungváry’s latest book, The Balance Sheet of the Horthy Regime: Discrimination, Social Policy and anti-Semitism in Hungary, which in turn relies on the cumulative research of German, American, and Hungarian scholars. Since it is a very recent publication, Ungváry incorporated the latest findings about the circumstances of this so-called occupation, which surely can’t be called an occupation in the accepted meaning of the word. It, in fact, could better be described as a troop movement within the territories of military allies.

Since the beginning of the year the controversy swirling around the erection of such a monument has been steadily growing in Hungary and abroad. It is not at all surprising, therefore, that Krisztián Ungváry decided to voice his opinion on the subject. Some people thought that the announcement of the erection of a monument was a joke, and accordingly Ungváry starts his article with a witticism of General Maximilian von Weichs, the general of the German forces sent to Hungary in 1944. When he was asked about the time it will take to occupy the whole country Weichs answered: twenty-four hours. And if there is resistance? Weichs’ answer was: only twelve hours because in that case there will not be so many welcoming speeches from Hungarian officials. Weichs felt that his stay in Hungary was unnecessary. His soldiers had nothing to do, and he personally spent his time going to parties, wine tastings, and the opera.

Ungváry makes no bones about the Orbán government’s duplicitous public relations campaign when it comes to Hungary’s role in the Holocaust. On the one hand, Ministers Tibor Navracsics and János Martonyi can admit Hungary’s share of responsibility in the events of 1944, but this is a message intended for foreign consumption. At home the government, by erecting a memorial to the German “occupation,” refuses to acknowledge any share of the blame. Some of the pro-government “historians” go even further and claim that, with the active help of Miklós Horthy, “300,000 Hungarian Jews were hidden, fed, and saved in Budapest.”

I think the erection of a monument was the last straw even for Mazsihisz (Magyarországi Zsidó Hitközségek Szövetsége), which has been watching with growing suspicion the government’s efforts to commemorate the 70th anniversary of the Hungarian Holocaust. Mazsihisz is an organization that represents only the Jewish religious communities, which is a very small group in comparison to those who consider themselves Jewish but have no religious affiliation. Mazsihisz also depends to a large degree on the goodwill of the Hungarian government, and therefore its leaders tread lightly. However, last year there was a shakeup in Mazsihisz, and it seems that the new leadership is taking a more activist role in defense of Jewish interests.

In charge of both the new House of Fates and the memorial is János Lázár. Lázár instructed Antal Rogán, mayor of District V where the memorial will stand, to make the necessary arrangements for a “building permit.” The new president of Mazsihisz, András Heisler, wrote a letter to Rogán in which he expressed his misgivings about the project. The letter interpreted the erection of such a monument as a “grievous and sad message” which worries both the Hungarian and the international Jewry. The letter specifically asked the authorities to abandon the idea of such a monument.

Heisler is afraid that if the monument actually materializes there will be “an international scandal” which he would like to prevent. Mazsihisz also has problems with the House of Fates. At the beginning of December they wrote a letter to Mária Schmidt in which they listed the names of twenty experts whose presence would ensure the historical accuracy of the planned exhibit. They asked her to pick five. Now, more than a month later, there is still no word from Schmidt. Moreover, Heisler knows nothing more about the monument than he did when he read news of it on January 1. In brief, all the plans for the Holocaust year are proceeding without any input whatsoever from the official Hungarian Jewish organizations. A few days ago Mazsihisz decided to write to János Lázár himself. As yet they have received no answer from him either.

So, this is where we stand. I agree with András Heisler. The falsification of history is proceeding apace on all fronts, but the Holocaust is an especially sensitive subject as far as the Orbán government is concerned. On the one hand, the government wants to look like a responsible trustee of the memory of close to 500,000 victims and therefore organizes a whole series of events commemorating the Holocaust’s 70th anniversary. At the same time it is busily rehabilitating the same Miklós Horthy who bore a major responsibility for the fate of those Jews deported to Germany. The monument to the German “occupation” is especially egregious. With its erection, the present government would be giving material form to its sanitized history of the country, in particular the absolution of Hungarian governments of the interwar period and the Hungarian authorities of seventy years ago of any responsibility for the fate of Hungarian Jews. It is a shame, and I hope that the Orbán government will abandon the whole idea.