About a week ago I read an interesting article about János Lázár campaigning in Algyő, a large village near Szeged. There seemed to be little interest in Lázár. The room was half empty. Lázár assumed that the older inhabitants of the village of 5,000 were attracted to social democracy and expressed his sorrow that the Hungarian left was unable to create a real social democratic party. Instead, he offered Fidesz as an alternative. He must have had his doubts about the intentions of his audience, however, because he said that they don’t have to vote for Fidesz as long as they vote for him. He even suggested that the people of Algyő might actually split their votes: they can vote for him and still cast their second ballot for the list of Unity. Then he talked about his visit to another village in the district where “when I was talking about Fidesz, people in the audience made faces and held their heads. I told them: I’m telling you straight, don’t vote for Fidesz, vote for me. I don’t like everything Fidesz does.” How low can you go? And why?

This scene, I think, says a lot about how some of the highest ranking members of Fidesz, like Lázár, actually think about their chances at the election. On the surface everything looks just fine. Fidesz leads in all the public opinion polls even as the opposition is languishing. Very few people are sanguine about the chances of Unity winning the election. A lot of readers of Hungarian Spectrum have already buried the opposition and are convinced of Fidesz victory. I agree that the data are for the most part depressing, but perhaps there is a ray of light.

Let me call attention to the more optimistic signals from the last Ipsos poll (February 13). This is the first time that the possible voters of the opposition parties–MSZP, DK, Együtt-2014-PM, and the Liberal Party–were asked whether they would vote for the united opposition. It is true that the numbers didn’t increase, but it did show that the voters followed their party leaders and lined up dutifully behind Unity. So, all the angst over Ferenc Gyurcsány’s presence on the ticket resulting in lost votes seems to have been misdirected.

On the other hand, people now complain that the new agreement among these parties didn’t immediately bring spectacular results. I am not surprised. Until that agreement the party leaders spoke with different voices. They campaigned under their own logos. In fact, there is still no common joint action and no joint campaign slogans. This is what Gábor Kuncze complained about yesterday on Egyenes beszéd. The campaign staff should hand out common campaign slogans to the politicians of Unity. Let’s hope that this will be done soon. In any case, even with better campaign tactics, one can’t expect immediate results. Or at least this is what Tibor Zavecz of Ipsos said in his interview.

Just looking at the numbers, Fidesz indeed leads the way with 30% as opposed to Unity’s 23% among the whole electorate. But, of course, we cannot forget about Jobbik, which has grown from 6% to 9% in a month. And of those who are certain that they will vote on April 6, Fidesz and Jobbik voters are much more gung-ho about voting for their favorite parties. While in the electorate as a whole Fidesz would get only 30% of the votes, among the active participants that number is 51% as opposed to 33% for Unity voters.

One could say that this is truly depressing, but then why did Tibor Zavecz say that “the opposition has tremendous reserves”? Well, 36% of the electorate still remains undecided. Among them are those who will not vote regardless, those who are secretive, and those who are truly undecided. This is a large crowd of about 1 million people and we know from other opinion polls that 52% of the people would like to see Viktor Orbán and Fidesz go. If Unity can inspire these 1 million people to go and vote, the election can be won.

Mind you, the present government is doing everything in its power to make sure that anti-Fidesz votes, especially from abroad, are reduced to practically nothing. Those with a domicile in Hungary have to register to vote at Hungarian embassies or consulates in the country of their current residence. I received several reports that the authorities are throwing back applications because, according to them, the information provided was not complete or was inaccurate. One person was denied registration because he wrote Balmazujváros instead of Balmazújváros as his birthplace. The fact is, believe it or not, that the electoral law specifies that the lack of an acute accent is grounds for a denial of registration. Then in the United States they sent out wrong information about the date of voting while in England the wrong address was specified.

On the other hand, new citizens from neighboring Romania and Serbia are being sought after. Already a sizable amount of money has been spent on government propaganda, including personalized letters sent by the prime minister urging them to vote. And then there is the pressure applied by local Fidesz bosses, which is especially successful with the vulnerable such as people on public work, to vote for Fidesz. 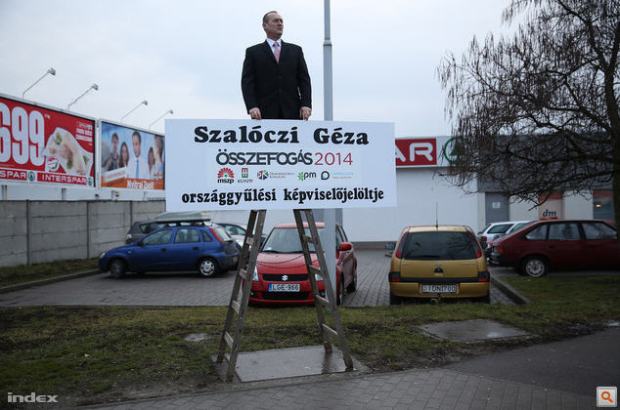 All in all, Unity has to win big to counterbalance all the advantages of the government party. I saw a very funny picture of a Unity politician campaigning. Since the poor man has no possibility of putting out his campaign literature, he brought a ladder, climbed up on it, and held up a sign. He stayed there for a whole hour in 32 degree weather. Well, one must have imagination in Orbán’s Hungary to overcome obstacles.