I have to admit that Viktor Orbán is doing an excellent job at promoting the idea that “Hungary is performing better.” His efforts are especially admirable considering how badly the Hungarian economy has in fact been doing under his stewardship. How does he manage to convince people that all is well?

The state television stations (MTV and Duna Television) are key weapons in the government’s arsenal of misinformation, but by now there is a whole media empire at the disposal of Fidesz. With its change of ownership TV2 now rivals MTV in servility toward the present government. The old stand-by HírTV is always at the disposal of the government. Széles Gábor, active in the Peace Marches, has his own newspaper and television station that cater to those whose political views lie at the convergence of the two rightist parties, Fidesz and Jobbik. In addition, most of the municipalities are in Fidesz hands and practically every bigger city and town, or in the case of Budapest every district, has its own newspaper freely distributed. All of these are full of government propaganda.

A few days ago I read an article about the political mood in Pécs where apparently the opposition has a real chance of winning. Even so, an older woman told the reporter that she will vote for Fidesz because everything is going splendidly in the country. She sees Viktor Orbán opening one factory after another. In addition, she now pays less for utilities.

And here we arrive at one of the Viktor Orbán’s campaign strategies. In the last few weeks Viktor Orbán has criss-crossed the country. Everywhere he goes he is greeted by adoring crowds. No one demonstrates against him, in contrast to the regularly televised demonstrations against politicians of the opposition. The choreography is carefully crafted by the Fidesz campaign staff. Local Fidesz politicians gather a sizable crowd before the arrival of the prime minister. Whether they are paid or not, no one knows. It is possible that they are all dying to meet Viktor Orbán although we know from past experience that Fidesz is ready to pay people if need be. And why can’t we see any demonstrators? The solution is simple. While opposition candidates announce their schedules way ahead of time, Orbán’s campaign visits are kept secret until the last moment.

Orbán also makes sure that he personally cuts the ribbon on every new business or infrastructure project, even small additions to already existing structures. Some of these projects have been in the making for years, but the cascade of these events gives the impression of an economic boom. Some official “openings” border on the fraudulent. For example, the Slovak and Hungarian pipeline that was connected yesterday. The pipeline will be functional only from January 1, 2015  on, if all goes well. But both the Slovak prime minister, Robert Fico, and Viktor Orbán were only too happy to celebrate the event months in advance. After all, both countries will hold elections soon. This whole affair reminds me of stories from the Rákosi era when unfinished factories had to be opened on the date specified by the five-year plan. In order to make things look real, workers started a fire inside so that smoke would be billowing out of the chimneys. 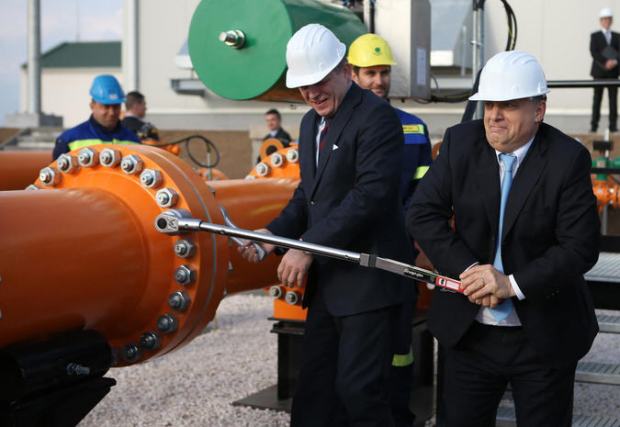 Then we have stories that can only warm the cockles of proud Hungarian hearts and demonstrate the great genius of Viktor Orbán himself. One of these is the acquisition (mind you, for the tidy sum of 15 million euros) of part of the Sevso/Seuso treasures, a fantastic collection of late Roman silver tableware from the fourth century. Seuso was a high Roman official in Pannonia who most likely because of the coming “barbarians” hid all or some of a set of silver dishes, which experts estimate might have consisted of more than 200 pieces. The whole story is so interesting that I am planning to write about Seuso’s treasures at a later time. Here it is enough to mention that the man who discovered the priceless silver dishes sometime in the middle of the 1970s died under mysterious circumstances. He was most likely murdered. His murderers smuggled the treasure out of the country. It ended up first in England and from there half of it went to the United States. The upshot is that all Hungarian governments, starting with József Antall’s, have been trying to get the stolen goods back. By Hungarian law they belong to the Hungarian state. Interestingly enough, it was a week before the election that the acquisition of  seven of the known fourteen pieces was announced yesterday. This was deemed such an important event that the noon news on Hungarian Radio, which masses of Hungarians listen to, was interrupted to announce the arrival of the Seuso treasures. And naturally, it was the prime minister himself who announced the great success of his government. The pieces will be exhibited in Parliament for the next two months.

And there is the opening of the new metro line. All of Budapest is excited; after all, the metro line came into existence amid great difficulties, mostly because Viktor Orbán did everything in his power to shelve the project and, once the work began, to stop it. But the closer the project got to completion the more the Orbán administration came to the conclusion that opening Metro 4 might be a useful instrument to convince the people of Budapest that this government cares about them after all. Today Viktor Orbán talked about Budapest as “the capital of the nation.” We all know that Orbán doesn’t really like Budapest because he suspects, not without reason, that the majority of its inhabitants normally support those who would like to unseat him.

Add to all this the charges of corruption against MSZP politicians, like the case of Gábor Simon, former vice-chairman of the socialist party. There are already signs that the case, which seemed straightforward at the beginning, might not be so simple. Simon might even have been framed. This wouldn’t be the first time that trumped-up charges have been brought against members of the opposition.

All in all, it is a beautifully constructed campaign. It is carefully crafted and, if we can believe the polls, it is working.