Right after the election I created two new folders: “Orbán government, 2014-” and “MSZP, 2014-.” In the first instance, I hesitated to be too specific and add the expected date of the end of the third Orbán government. In the second instance, I was certain that a new era would begin soon after the election. It was inevitable that the role of Attila Mesterházy both as party chairman and as the candidate for the post of prime minister would be questioned.  Supporters of Gordon Bajnai and Ferenc Gyurcsány were never happy with Mesterházy and were convinced that with Bajnai at the head of the Unity Alliance the opposition to Fidesz would have done better. Bajnai was always slightly ahead of Mesterházy in popularity, though not by much.

Considering the internal tensions that most likely existed within MSZP in the last two years or so, it was remarkable that the leading socialist politicians stuck pretty well to the party line. But some, especially the old hands, were unhappy with the way things were going. I must say that I sympathize with them. These people had years of experience behind them and a record of accomplishment. They had known the leading members of Fidesz since 1988-89. They had dealt with them on a daily basis. By the time Mesterházy and some of the newcomers got into politics, Viktor Orbán was no longer involved in open give and take. For eight years, between 2002 and 2010, he rarely showed up in parliament. He was a shadowy figure for these newcomers.

The younger generation also had no experience in party organization. They decided, for instance, not to put any effort into grass roots organization in the countryside. The new party leaders thought they could let Fidesz have the countryside and win with only city voters. That turned out to be a grave  mistake. And this particular problem was just one of many on the organizational level.

In the last few days, more and more old-timers have hinted rather strongly that Mesterházy should resign. I suspect that he will not resign, but it is unlikely that he will be reelected given the mood of the party faithful.

Today and tomorrow I will talk about the criticism that came from two former chairmen of the party: Ildikó Lendvai and István Hiller. Hiller had a long interview with Népszava, and Lendvai published an op/ed piece in Népszabadság.

As I was looking through my notes, I found an interview with Lendvai from November 2011 which also appeared in Népszabadság. The reporter jokingly asked her: “Don’t you think that you are going to be in trouble for giving an interview?” He asked that question because Attila Mesterházy had asked the older party leaders not to appear in public. Lendvai, who is well-known for her quick ripostes, answered: Mesterházy “asked everybody to work hard. I can report that I’m working and not just having fun, however pleasant the company.” Even in that old interview, Lendvai made it clear that she would like to have party leaders who were not looking to see “where the head of the table is.”

So, how does she assess the state of the party now? The title of her article is “Plan B.” She doesn’t mince words: both MSZP’s structure and its functioning are bankrupt. Actually, not just MSZP but the whole Hungarian political structure is in trouble, including Fidesz. The symptoms of the crisis in her opinion are:

(1) Fewer and fewer people bother to vote. Politics has become a game of the few. Politicians are often preoccupied with their own former political battles. The chasm between politics and the citizenry is growing.

(2) The very notion of parties is questionable. Fidesz no longer functions as parties normally do. KDNP is no more than a name while Fidesz operates more like a hierarchical, almost religious organization rather than a party. It exists only in “political processions” and is no longer the molder of government policies. It tried to take over the role and culture of the extremist Jobbik, but its hegemonic role in the right became weaker instead of stronger. It can easily happen that there will be a time when two right-wing parties fight between themselves for supremacy.

(3) In the last four years there were attempts at building bridges between parties and civil society but they were all failures. Fidesz’s Civil Összefogás Fórum is no more than a “collection of party soldiers” while Gordon Bajnai’s attempt at cooperation with civil society failed.

(4) The intellectual aging of the political elite has accelerated. No new ideas have penetrated the parties for years. In MSZP “change” was seen simply as a change of generations. But the electorate doesn’t have any better opinion of the new politicians than of the old. Politicians have to face the fact that even those who are interested in politics got to the point that they want to throw out all politicians. The electorate is becoming older and older, the camp of  the “politically homeless” is growing, there is less and less interest in politics, and less and less hope. This is what Hungarian politicians have to face.

In this situation the disappearance or reappearance of a party or some politicians will not solve the problems. One has to start with Plan B. This Plan B has at least three important components. 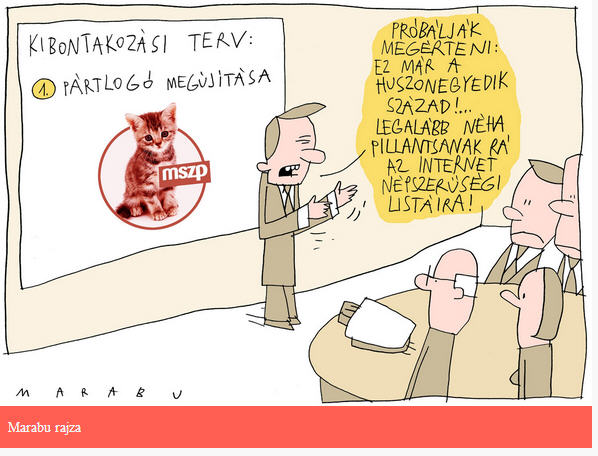 Plan for a solution: Change the party logo
“Try to understand: this is the twenty-first century! At least you should sometimes take a look at the popularity lists on the Internet”
Marabu / Népszabadság

The first and the most difficult component of Plan B is the creation of an entirely new political structure. Instead of the present two political centers, a true network should be built that includes the whole society. This network would not only prepare Hungarian society for an election in 2018 but would also help it to survive the next four years. Lendvai finds it essential to build a network that could eventually become a movement. The lessening importance of parliament can be expected in the next four years. As a counterweight new communities should be created: professional volunteer organizations, a network of mini-parliaments, regional and societal advocacy groups, and so on. Just as happened economically in the Kádár regime: besides the official economy a “second economy” was born that not only helped people survive but also prepared the ground for future changes.

Second. In the coming parliamentary cycle the social divide between the haves and the have-nots will most likely grow. Solidarity must be strengthened in Hungarian society. People should be encouraged to volunteer for all sorts of work, from feeding the poor to offering pro bono legal help to the needy. This way new blood could come into traditional politics. And the parties should be made more open to accepting help from the outside.

Third. People both inside and outside of the party must discuss topics they feel uncomfortable with.  Is it really true, as a lot of people in MSZP claim, that “we don’t have to talk about democracy because this doesn’t interest the poor people? Or that we shouldn’t talk about the Gypsies because the topic is apt to arouse negative feelings in many?” Lendvai’s answer is that the left should fight against vulnerability, which derives both from the lack of bread and the lack of rights.

At the very end of her article there is an innocent sounding sentence that may not even be noticed by the casual reader. “One ought not to compete with Fidesz and Jobbik by copying Fidesz’s centralized one-man rule and imitating Jobbik’s spurious slogan of law and order accompanied by the limitation of rights. We need a Plan B. But our own.” This sentence contains a severe criticism of Attila Mesterházy, who lately has been building a more centralized party with his own small group of young politicians and who a few days ago even talked about MSZP standing for “law and order” because after all that is what many people want. This is a hopeless and unacceptable proposition, as some of his fellow MSZP politicians immediately announced. I don’t know whether Lendvai’s ideas would work, but that Mesterházy’s ideas are a dead end I’m sure.