I don’t write too often about political events that affect agriculture. First, I don’t know much about the topic and, second, I don’t have a genuine interest in it. In fact, I have a certain aversion to agriculture, most likely dating to my childhood and the very negative impressions I gained from occasional visits to poverty-stricken southern Baranya villages. That is probably also the reason for my negative feelings about the literature produced between the two world wars by writers who extolled the virtues of the Hungarian peasantry and its way of life. At a very early age I came to the conclusion that there was nothing wonderful about village life because it meant backwardness and poverty. Instead, I believed then and continue to believe now that we should eliminate the gaping differences between city and countryside.

Earlier we talked about the land-lease program that has been under way for a number of years. Parcels of lands owned by the state are leased for twenty years, allegedly to young farmers with initiative. In reality, in the most recent competitions many of the lots were handed over to Fidesz party faithfuls who had no experience in farming. One often heard about fairly prosperous farmers whose main source of income was animal husbandry but whose grazing land was taken away from them;  they were forced to sell their sheep or cows. There were heartbreaking stories of  poor people who applied to have their leases renewed but lost both their land and their livelihoods to politically connected applicants who could receive EU subsidies even if they left the land fallow.

One case really shook me. It was the fate of the Kishantos Rural Development Center, which includes a 452-hectare organic demonstration farm which has been in existence for twenty-one years. It began as a local grass-roots organization but grew and prospered with the help of German experts who helped design the farm. József Ángyán, a professor of agriculture at Gödöllő, Hungary’s agricultural college, was also heavily involved. In 1995 the center acquired a lease for a plot of land on which they established a school to teach young farmers about organic farming. The philosophy of Kishantos was rooted in the ideas of N. F. S. Grundtvig (1783-1872), author, poet, philosopher, and teacher. He was the ideological father of  “folk high schools,” educational centers for adult education. “Folk high schools” became popular in Hungary at the end of the 1930s and were revived right after 1945, but with the communist takeover they were forced to close their doors.

Over the years the Kishantos educational center developed ties with Danish and other European partners and organized international exchange programs. As the manager of Kishantos said, “the main goal of that program is to offer experiences for young Hungarians to learn about democracy and sustainability in practice.”

The school and the center are financed from the income the farm earns. But the lease for the 452 hectares of state-owned land expired on October 31, 2013.  The Hungarian Land Fund, representing the state, decided to put an end to the Kishantos organic farm and educational center. It put the acreage, cut up into ten different lots, on the auction block. It is clear that the Orbán regime wanted to ruin Kishantos.

The reason? There can be several. One is perhaps József Ángyán’s involvement in the project. Viktor Orbán promised Ángyán an agricultural strategy based on small family farming.  Ángyán was pleased that his ideas would become reality and therefore accepted Viktor Orbán’s offer of a seat in parliament.  Soon enough, however, Ángyán became disillusioned and turned against the Orbán government’s distribution scheme for state land. The second reason might be that the project’s philosophy does not mesh with Viktor Orbán’s ideas about the Hungarian ethos. Kishantos is dedicated to “spreading the idea of sustainability and democracy.” The founders claim that Kishantos is “the only project in Europe where sustainable agriculture, ecological farming, education and democracy have been functioning together in perfect harmony.” Not exactly the kind of philosophy the Fidesz folks would be terribly keen on. 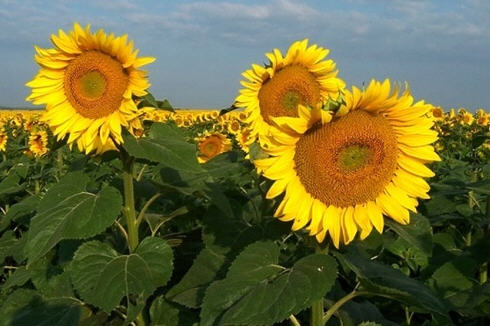 Sunflowers in the good old days in Kishantos

Kishantos applied for all ten lots but were unsuccessful. They received none of the land they had cultivated for the past two decades. The farm’s management appealed the decision. Although there was no verdict by the time the spring seeds had to be sowed, they decided that the land shouldn’t remain fallow while litigation was underway. Therefore they opted to go ahead with the planting. Their reasoning was that if they win the case they will have their usual crop and if the new owners win they will be the beneficiaries of the Kishantos people’s labor. Well, this is not how the new owners saw things. A week before Easter several tractors arrived and harrowed under the plants that were already green. One rarely can see such barbarity. What kinds of owners would these people be who could destroy acres and acres of young seedlings? The whole thing is outrageous.

So much for the tender seedlings

Well, the crop is gone, but this may not be the end of the story. Kishantos’s fate remains in the hands of the courts and early indications are favorable. I for one very much hope that Kishantos will stay and prosper.