A rather lengthy article appeared in Népszabadság about a public works success story in Gyulaj, a village of 1,000 inhabitants in Tolna County. The population of Gyulaj is 65-70% Roma, up from ten to fifteen years ago when Roma made up only 40% of the village’s population. Unemployment in villages with a majority Roma population is very high. In the past the unemployed lived on state assistance. There was limited opportunity to move from welfare to work, even publicly funded work. Although these villages received government grant money aimed at easing Roma unemployment even before the public works program of 2010, the funds were not always put to good use by the local authorities. Gyulaj is lucky because its mayor, Mrs. Károly Dobos, has vision and uses the funds to promote self-sustenance, not just for activities like street cleaning. But, as the article also notes, “it is a heroic struggle to keep the village alive.” 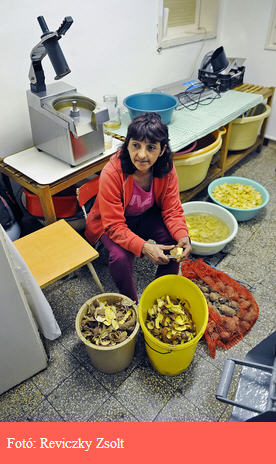 The village can employ between 80 and 100 men and women on the village’s small, twelve hectare farm. They grow vegetables for use in the kitchen owned by the village, with some left over for sale. They raise animals as well. The mayor claims that they are self-sufficient as far as food is concerned.

The village got not only public works money but also grant money to buy agricultural equipment and a separate freezer unit. New furnaces that use wood chips heat the municipal buildings; apparently three men are kept busy by chopping and and making wood chips.

The village also received a grant to train people to perform small repairs in municipal buildings. The Knights of Malta are also active in the village. The Hungarian section of the Sovereign Military Order of Malta sent social workers to Gyulaj. These social workers live with the Roma families, helping them with their myriad problems.

But what will happen when there are no more public works projects? The mayor claims that they are planning for the day when they will no longer receive 70-80 million forints a year. The municipality, together with the Knights of Malta, is planning a cooperative to grow mushrooms. They already raise rabbits for sale. So, everything seems to be well under conrol.

One of the public workers interviewed in the article seems satisfied. He and his wife have eight children and, with the additional child support from the state, he earns 77,300 forints a month. That is 250 euros for a family of ten. They can survive on that amount of money because the children receive their meals in school, meals that are supplied from the 7 hectares the public workers cultivate. Also, the municipality’s rabbits can be bought cheaply: 700 forints a kilogram–and we know about rabbits. There will be no shortage of them, so the price should drop further.

Gyulaj is a rare exception. Soon there will be no more money for the public workers, whose numbers swelled to boost the government’s popularity before the election. Mayors report that in some cases the number of workers will be cut  in half. Keep in mind that no dole will be forthcoming because the Orbán government abolished it. Gyulaj’s budget, however, will not be cut. Either the mayor is a very lucky woman or the government thinks it needs a few success stories.

Poverty remains a serious problem in Hungary. According to estimates, half a million children live in poverty and over 40,000 go to bed hungry. These children receive some meals in nurseries, pre-school institutions and schools on weekdays. But during the weekends there is often nothing to eat at home.

A charitable organization, the Children’s Nutrition Fund of Hungary, is working to alleviate this problem. (For more about the American branch of this non-profit see the post below.) The organization has been active since 1993. In 2012 80,000 families benefited from donations collected by CNFH, and last year 4,000,000 kilograms of food were distributed to children in need. And there is need because poverty is growing in Hungary.

Of course, not all those under the poverty line are Roma, but many of them are. They are also discriminated against. Gyulaj’s school is almost completely segregated and therefore, as the principal of the school told the Népszabadság reporter, students are not prepared for the kind of discrimination and hatred that is awaiting them once they step outside their village. In a way, they live in a bubble, unprepared for Hungarian reality.

CNFH believes that easing poverty can reduce racism as well. It is certainly a step in the right direction.