It was a few days ago that Vladimir Putin met with his counterparts from Kazakhstan and Belarus in the Kazakh capital, Astana, to form the Eurasian Economic Union as a counterweight to the European Union and the United States. The provisions of the union will give freedom of movement and employment across the three countries.  They will also collaborate on issues of energy, technology, industry, agriculture, and transport.

What does the formation of the Eurasian Economic Union have to do with Hungary, a member of the European Union? Directly not much, but one must not forget that one of the cornerstones of Viktor Orbán’s foreign policy initiatives is the “Opening to the East.” In the last three or four years he has developed good relations with all three countries.

There has been a lot of discussion here and elsewhere in the media about Russian-Hungarian cooperation in the Southern Stream gas pipe project and the recent European Union efforts to block its construction, fearing that Gazprom will not  abide by the Union’s competition rules. Even more time was spent on the Russian loan to Hungary for Rosatom to build two additional nuclear reactors in Paks. What we hear less about are the quiet but very friendly relations between Kazakhstan and Hungary. The same is true about Belarus. It seems that Viktor Orbán enjoys the company of dictators.

In May 2012 Viktor Orbán visited Kazakhstan and gushed over the great achievements of Nursultan Nazarbayev, the president and dictator of the country. He emphasized “the historical and cultural ties that unite our peoples.” He admired the new capital, Astana, which he described as a “symbol of humanity’s new phase of development.” Orbán’s servile performance was disgusting then but now, two years later, Hungarian servility toward Nazarbayev has reached new lows.

Back in March, a journalist from 168 Óra discovered that in Városliget, Budapest’s city park, one of the roads was renamed Astana Road. After some research the journalist discovered that the decision to name a street after the Kazakh capital had been reached already in 2013. Originally, it was to be somewhere in District VIII, a poor section of Pest, but apparently the Budapest city council decided that the district is not elegant enough for the very special relations that apparently exist between the two countries. By the end of April the same city council (naturally with Fidesz majority) voted to erect a statue of Abai Qunanbaiuli or Kunanbayev, the great 19th-century Kazakh poet. Kunanbayev is much admired in Kazakhstan, where many statues commemorate his person and his work. Outside of Kazakhstan he has only one statue, in Moscow. But soon enough there will a second one which Nursultan Nazarbayev himself will unveil on June 4 in Budapest. The statue is a present from the people of Kazakhstan. It is a bust that stands on a three-meter-high platform.

There are other signs of the excellent relationship between Hungary and Kazakhstan. The mayor of Astana offered a piece of real estate gratis to the Hungarian state. The Budapest government can build a structure on the site in which Hungary could hold exhibits about the country and its people. Apparently, this is a very generous offer because real estate prices in Astana are sky high: millions of dollars. 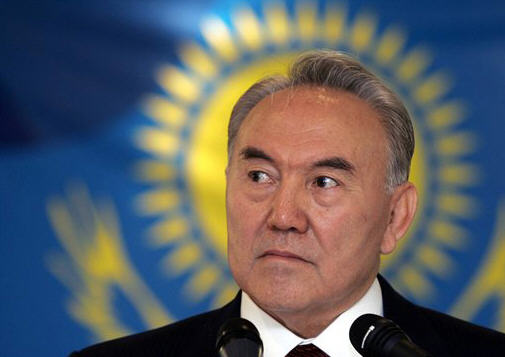 Meanwhile, the fawning over the Kazakh dictator seems to have no limits. At the end of April, before invited guests in the building of the Hungarian Academy of Sciences of all places, Sándor Fazekas, minister of agriculture and rural development, and János Horváth, the oldest member of parliament and a US-Hungarian citizen, introduced the Hungarian translation of Nazarbayev’s book about his childhood and youth.  Zoltán Balog, minister of human resources, was in the audience.

Naturally, the book was a bestseller in Kazakhstan, though I doubt that it will fly off the shelves in Hungary. Fazekas referred to the Kazakh dictator as “an internationally respected statesman” whose autobiography will help Hungarians learn more about the history of Kazakhstan. János Horváth went even further. According to him, the fantastic achievements of Nazarbayev’s agricultural reform “will one day be taught at universities.” In his opinion, “it is appropriate (helyénvaló)  for the leader of a Soviet-type government to behave like a dictator, but Nazarbayev wants to move away from the practice.” The problem with this claim is that there has been absolutely no sign of Nazarbayev giving up power and contemplating the introduction of democracy. In fact, just lately he got himself reelected with 95% of the votes. Naturally, the Kazakh ambassador to Hungary was present; he compared the Kazakh president’s autobiography to biographies of Gandhi and George Washington. It was quite a gathering.

And last Monday Duna TV showed a Kazakh film, with Hungarian subtitles, based on Nazarbayev’s autobiography. As Cink, a popular blog, reported, “The Stalinist Duna World is showing a film about the Kazakh dictator tonight.” This is how low Viktor Orbán has sunk in his quest for friendship with countries outside of the European Union.