I would like to dwell a little longer on what has happened in Miskolc. Yesterday I summarized the events of 2009 when Albert Pásztor, then police chief of the city, made some remarks that reflected badly on the Roma minority of Miskolc. He made it clear that in his opinion integration of the Gypsies into the majority society had failed and that the coexistence of “Gypsies and Hungarians” is hopeless.

Pásztor was suspended by Hungary’s national police chief only a few hours after he made his views on the subject known. Equally speedy was the reaction of the local politicians, including the MSZP mayor and the local SZDSZ caucus, who came out in defense of Pásztor. The overly rapid response of the Gyurcsány government backfired, and the minister of justice had to reinstate Pásztor.

Some people date the growth of Fidesz/Jobbik supporters in Miskolc from that incident. According to estimates, 65-70% of the electorate in Miskolc today would vote for either Fidesz or Jobbik. Keep in mind that Miskolc was a socialist city between 1990 and 2010. People in the city who stand by Pásztor are convinced that the left can regain its predominance in the city only with him as its candidate.

In yesterday’s post I hinted at the typical reaction of Hungarians to any kind of untoward event. The reactions are immediate, pro and con and nothing in between. If we go back to 2009 and read about the Pásztor crisis it becomes clear that the government didn’t think through the possible consequences of suspending the local police chief. The government, which wholeheartedly supported the decision of the national police chief, knew very little about the political realities of Miskolc. In fact, this case is a good example of why the centralized Hungarian police structure is ineffective. If Miskolc had had its own independent police force, the national upheaval could have been averted. The socialist mayor, who obviously trusted the local police chief, could have had a talk with him and told him to apologize and tone down his remarks. Instead, the central government got into the unenviable position that they had to retreat and reinstate Pásztor.

Something similar happened this time. The local Együtt politicians endorsed Pásztor but Viktor Szigetvári and Tímea Szabó, the co-chairs in Budapest, refused Pásztor’s invitation to visit the city and talk things over. In my post written after 2009 incident I made it clear that what I thought of Pásztor’s remarks. Like most thinking people, I am convinced that integration and education are the only ways to solve the problem of the Roma minority. But integration cannot happen overnight. It took a long time in the United States to get to where we are today with the African-American minority, and we still have a very long way to go.

Most people point out that during the Kádár regime the situation of the Gypsies was a great deal better than it is today. The majority of them had jobs for which no skills were necessary. The men living in villages on Monday went to Budapest or other cities to work on construction projects or in factories and on Friday they went home to the family for the weekend. This was all very nice, but the education of Roma children was neglected and therefore when the low-paying unskilled jobs disappeared after 1990 they were left unemployed and reliant on welfare. Since then little has happened. Yes, Pásztor is definitely right on one thing. Attempts at integration have failed miserably.

I understand that the situation is especially bad in Miskolc. In today’s Galamus an article appeared written by Andrea Varga, a social worker from the city who knows the problems of the Roma colony in Miskolc. She considers herself a liberal who convincingly describes her long-standing relationship with Roma families and Roma school children. Yet she thinks that “the left made a wise decision when it supported Albert Pásztor as an independent mayoral candidate.” Why, one could ask.

Varga describes the hard times the city had to face after the factories closed.  The town never recuperated from the precipitous collapse of its economy. People are embittered, disappointed, and frustrated. The last four years of Fidesz rule only exacerbated the situation. The result, she claims, is the growth of racism. People are trying to find scapegoats, and the rather large Roma population is the first victim of their frustration and hatred. Jobbik and Fidesz with their anti-Roma policies are adding fuel to the fire. The frustrated people of Miskolc get more and more irritated by some of the loud members of the Roma subculture, and they turn against those who try to defend the Gypsies. She knows from bitter experience that it is impossible to have a reasonable conversation with these people. They don’t listen to the other side. 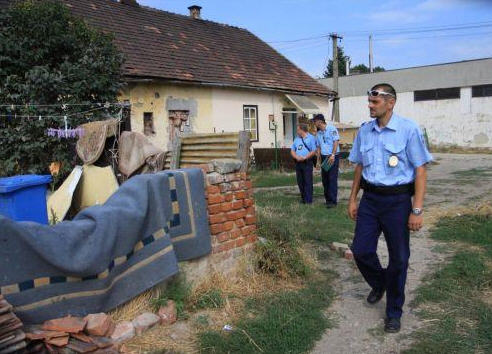 This is the area where Andrea Varga served as a social worker
Source: miskolc.hu

That’s why–Andrea Varga continues–Miskolc needs Pásztor, because if the parties on the left campaign there with their usual arguments the voters will neither listen to them nor vote for them. What is needed in Miskolc, she claims, is “flexibility” and a “channel of communication,” which might be Albert Pásztor. “This does not mean the abandonment of our principles, but we should opt for problem solving based on a realistic assessment of the situation.”

Now let’s see what Pásztor has to say for himself. On the whole, he stresses his commitment to democracy and promises “to talk about possible reasons for the conflicts [between Roma and non-Roma] in such a way that nobody should feel branded as a result.” But, at the same time, there is a sentence that might give us pause: “We must find out whether over and above the social situation there is something deeper and possibly revealable that the crimes that most irritate the inhabitants are primarily committed by those who are considered to be Roma.” What does he mean exactly? It would be a good idea to find out, and I’m sorry that those who oppose Pásztor refused to meet him. They just said no!

This attitude very much reminds me of what the Gyurcsány government did in 2009: they didn’t bother to investigate the situation in Miskolc. Now Együtt refuses to find what makes this person tick and what they could expect from him were he to become mayor of the city. It’s a mess. Parties draw lines in the sand, stand on moral principles to the exclusion of political realities–and lose.