A change of pace. What else can we say about Viktor Orbán after his three recent public appearances and his decision to share his vision and wisdom with the world? Instead, let’s talk about history.

I must have mentioned how great the interest is in Europe on the 100th anniversary of World War I. German and Austrian papers in particular have been spending considerable time and energy telling their readers about events a hundred years ago. Often on a daily basis.

Hungarians who are so terribly interested in history seem to spend less time on the Great War, as it was called at the time. However, there is a company called Arcanum Adatbázis Kft. that specializes in the digitization of documents, maps, paintings, etc. They just offered free access to the issues of five Hungarian newspapers published one hundred years ago. I took advantage of the offer and read the August 22, 1914 issue of Népszava, the newspaper of the Hungarian Social Democratic Party. Today I’ll share some of that hundred-year-old news.

Before I embark on my project let me note that the Hungarian social democrats, just like other social democratic parties all over Europe, forgot about their internationalism after the outbreak of the war and became enthusiastic supporters of the war effort. Thus no one should be surprised about Népszava‘s patriotism and its fierce attack on tsarist Russia. After all, Russia’s oppressive regime was one of the justifications for socialist support of the war effort.

I should also mention that by coincidence I happened to pick a day that is described by historians as the war’s “deadliest.” It was on August 22, 1914 near Ardennes and Charleroi that the French army lost 27,000 men. It was a much larger loss than the one the British suffered in the Battle of Somme, which is usually cited as the war’s worst. The Battle of the Ardennes lasted three days, between August 21 and 23. Keep in mind that the articles in Népszava, a morning paper, were most likely written the night before.

Népszava was a slim paper in those days, ten pages in all, but six of these were devoted to the war. Headlines: “The German army destroyed the French. The troops of the Monarchy advance in Russia. Revolution broke out in the empire of the hangman Tsar.”

The paper enthusiastically announces that the German advance this time is even swifter than it was during 1870-1871 and optimistically predicts that “the war will soon be over.” The first decisive battle has taken place. Although it was not on French territory, as was predicted, it was very close, only 12 kilometers from the border. “Brussels already belongs to the Germans”; this occupation was a magnificent military achievement. Liège is also in German hands.  “The German army will soon move all the way to the North Sea.”

The situation on the ground was not so rosy. Here are a few lines from a German soldier’s diary entry: “Nothing more terrible could be imagined…. We advanced much too fast–a civilian fired at us–he was immediately shot–we were ordered to attack the enemy flank in the forest beeches–we lost our direction–the men were done for–the enemy opened fire–shells came down on us like hail.”

Népszava, like the other papers, spends considerable time accusing the enemy of all sorts of beastly things. According to the paper, German soldiers write letters home in which they tell stories about the cruelty of the French toward prisoners of war. For example, “they cut both hands, poked the eyes out, and tore out the tongue” of a German prisoner. 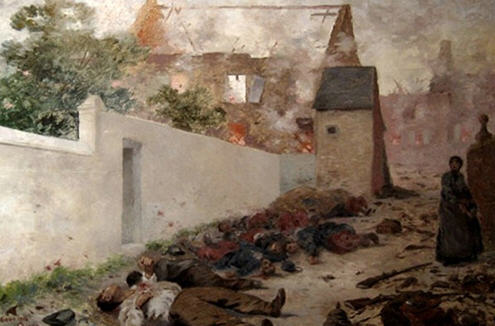 After the Battle of Ardennes

On the Russian front the newspaper is unable to come up with such spectacular victories. The report simply says that “the Russians have been unable to cross the border of Bukovina,” which was  part of Austria-Hungary until 1918. As for the paper’s claim of a revolution in the Crimea, that might have been only wishful thinking on the part of the Hungarians because history books do not seem to know about it.

It is interesting to read about Russian-Ukrainian relations from the perspective of 1914. The paper points out that there are 30 million Ukrainians living in Russia who look upon this war as “a war of independence.” These oppressed Ukrainians are looking forward to the day when they can join their four million Ruthenian brethren who live in Austria-Hungary.

A Hungarian paper would naturally spend considerable time on the war next door, in Serbia. They relate stories coming from returning wounded soldiers and prisoners of war. According to a Hungarian lieutenant, the Hungarians “decimated” the Serbian forces. Those who were not killed escaped in the direction of Podgorica (in Montenegro) and Ada (Serbia). However, some soldiers climbed trees and kept shooting at the Hungarian troops. He claimed that the Serbs are cowardly and brutish soldiers who leave their own wounded men behind. The Serbs, according to the paper, don’t have too many fatalities, but they do have a lot of wounded soldiers. Two of them were brought to Budapest. They told the Hungarians that they did not want to join the army but their officers forced them with revolvers. These two also claimed that the army is tired, but the officers are trying to convince them to go on because the Russians will be coming momentarily.

A fair number of Serb prisoners of war arrived in Hungary already by late August.  The paper talks about 300 prisoners in Esztergom. Apparently another 3,000 were on their way, being transported by ship.

All in all, the usual war psychosis. The enemy is vile, cowardly, cruel while our side is brave and wonderful. Our victories are magnified, the enemy’s minimized. Hopes center around a Ukrainian uprising so they can join the Ukrainians living in the Monarchy. There is also speculation of a revolution in Russia. Much time is spent on the weariness, disillusionment, and hardships in the enemy country. This is especially the case when it comes to stories about Serbia.

Finally, something the journalists of Népszava did not know when they put the newspaper together. It was on August 22, 1914 that Austria-Hungary declared war on Belgium. A bit late, don’t you think?