Every year Hungarian ambassadors assemble in Budapest to listen to very lengthy lectures by Viktor Orbán on their duties.  I began covering this gathering in 2010, when the prime minister outlined “a much more courageous, much more aggressive foreign policy”  than the one pursued by the socialist-liberal governments. In 2011 he announced his intention to wage a war against the European Union in defense of the country’s sovereignty, and he urged the ambassadors to steadfastly defend all of the government’s unorthodox moves. In July 2012 his speech centered around the protracted economic crisis that was “not made any easier” by the existence of the democratic model. “Europe chose the democratic model after World War II,” so that’s that. This was not a criticism on his part, he added. And a year later, in 2013, he claimed that Europe can remain competitive only if it finds accommodation with Russia. He admitted that this is a difficult proposition because Russia is not a democratic country. “However, we must understand that for Russia it is not democracy that is the most important consideration but rather how the country can be kept intact.”

If anyone thought that after his speech of July 26 Orbán would try to retreat, realizing that foreign reaction was exceedingly critical of his illiberal ideas that are incompatible with the values of western democracies, they were mistaken. Here are the most important segments of his long speech as reported by MTI. It appeared on the government’s website.

Orbán in his 2010 speech urged the ambassadors to defend the Hungary’s unorthodox policies. Today he suggested the opposite. They “should not assume a defensive posture” because “the Hungarian position can defend itself.” They should listen to what other nations’ representatives have to say, but their answers should not be substantive. It should be no more than a polite gesture, “a civilised obligation.” In brief, Hungary needs no advice from anyone. 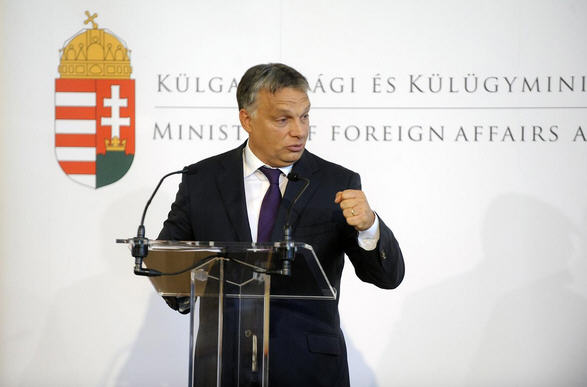 The ambassadors must not represent a country which is constantly criticized and questioned on its economic indicators or on its historical sins. “No one in the whole world has the right to take us to task, especially since Hungary’s democratic credentials are the best in all of Europe.” After all, at the time of the acceptance of the new constitution every possible legal question was answered satisfactorily.

As for Hungary’s place in today’s world order, there is no question that “Hungary’s place is within the western alliance system,” but “we no longer follow a foreign policy based on ideology.” The only consideration is “Hungarian national interest.” In his opinion “clever nations invented foreign policy based on ideology for half-witted nations.” And surely, Hungary is not one of them.

Normally, Orbán does not like question and answer periods. For example, apparently the reason for his recent cancellation of a speech at Georgetown University was the university administration’s insistence on such a format. It seems that on these occasions, however, whether he likes it or not, he has to answer a few polite questions by the ambassadors.

So Csaba Balogh, ambassador to Bratislava, asked him about Hungary’s position on the Russian-Ukrainian crisis. We already knew that Orbán is reluctant to support joint European efforts at containing Putin’s expansionist plans. This time he made his position crystal clear. For him the Russian-Ukrainian crisis has only economic ramifications, and these are obviously negative. Already last year on the same occasion Orbán advocated closer ties between Russia and the European Union. Today he sadly noted that, despite his advice, relations between Russia and the European Union are getting worse and worse. And that is bad not only for Hungary but also for the European Union.

So, what will Hungary do under these circumstances? Orbán’s Hungary will seek out those countries whose interests lie in preventing further rifts between Russia and the EU and promote closer cooperation with them. In plain English, he will try to drive a wedge between the member states in their policy toward Putin’s Russia.

Orbán seems to be convinced that criticism of his “seeking a different political model”–as he euphemistically called his illiberal vision of Hungary’s future– is some kind of punishment for his “different views on Russian sanctions.” Otherwise, there would not be all that fuss.

Finally, Orbán stated that he is “dead against” immigration because he does not consider multiculturalism a desirable end. Homogeneity is a valuable feature within individual countries, and therefore these homogeneous communities should not be broken up. To quote Reuters, Orbán told his audience that “we must fight to keep this issue under national jurisdiction…. I make no secret of this: we will continue with a very tough policy that does not at all encourage immigration … For Europe to have general rules that affect all of us who think differently is out of the question.” I assume he means only extra-European immigration. In plain language, this is a “whites (and probably Christians) only” policy. He called the EU’s immigration policy hypocritical, impractical, and without moral foundation. As Reuters rightly pointed out, that might put Orbán at odds with Brussels.

It is also interesting to note what MTI’s summary left out, which other journalists who were present noticed. The most obvious to me was Népszabadság’s reporting that “one must not overrate the so-called common European values.” The liberal paper considered that sentence so important that it used it as its headline.

So, there is plenty to chew on here, and I am sure there will be more to discuss when the complete transcript is released. In any case, the European Union has a problem on its hands as Wolfgang H. Reinicke, president of the Global Public Policy Institute, pointed out a few days ago. He optimistically predicted that “Europe’s Orbán problem” can be fixed. It all depends on the political will to confront him. Orbán is ready for that fight.