Earlier I published several reports on Bálint Magyar’s theory of the mafia state. In fact, I devoted three consecutive posts, the first of which appeared on June 18, 2013, to his description of Orbán’s system of government as a new kind of autocratic regime. Magyar’s analysis of the current Hungarian political system elicited widespread attention in Hungary as well as hundreds of comments on Hungarian Spectrum.

A few months later (November 2013) Bálint Magyar and Júlia Vásárhelyi published an edited volume of essays written by twenty-two scholars from different disciplines who embrace the theoretical framework Bálint Magyar worked out in the first decade of the century. Its title was Hungarian Octopus: The Post-Communist Mafia State. The book became an instant bestseller. More than 11,000 copies were sold within a few months. It had to be reprinted four times. I wrote a review of it on Hungarian Spectrum. Again the review prompted a lively discussion, some people finding Magyar’s argument compelling while others disagreed with him. In any case, since the appearance of Hungarian Octopus, the concept has been widely accepted by scholars as well as by the left-leaning Hungarian public. Those who are familiar with the workings of the Orbán regime find Magyar’s description of it a perfect fit. 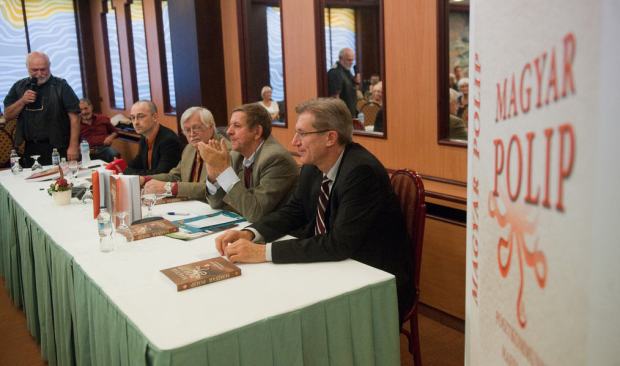 The second volume of Hungarian Octopus has just been published, and it is fascinating. In his introduction Magyar takes into consideration some of the criticisms and additional observations he received during discussions of the contents of the first volume. This introductory essay is so full of information and novel observations that I will most likely have to devote another post to it. But let’s start.

First, Magyar describes the key actors of the mafia state. He begins with the economic-political actors whom Magyar calls “poligarchs” whose ranks include several subcategories: the oligarchs, the front men (in Hungarian stróman/ok), corruption brokers, the family guard/the secret service, and the family privatization of databases. Let me go into some of the details.

Who belong to the class of poligarchs? These are people who attained illegitimate wealth by being members of the political family. Their political power is known but their economic power, their wealth is hidden. They use front men; their money is often hidden in foundations. The chief poligarch is the Godfather–in our case, the prime minister.

Beneath the poligarchs comes the class of oligarchs who began their careers with legitimate business activities and who, as a result of their economic power, acquired political might. In ordinary post-communist states their economic activities are legal, but the way in which they acquire business opportunities often is not. They acquire advantages over their competitors by illegal means. They are, however, more or less autonomous actors. But in Hungary, Magyar argues, the mafia state makes these oligarchs’ autonomy impossible or very limited. As he puts it, “it domesticates” them. They are partly or wholly dependent on the good will of the state.

Magyar distinguishes several type of oligarchs. There are the inner circle oligarchs. They have been close to Fidesz from the early 1990s on, and in part they have accumulated their wealth through their political connections. Currently, they don’t have any political roles but they belong to the small circle of people who are able to formulate policy. A good example of this sub-type is Lajos Simicska. Of course, any of these oligarchs can lose their positions if the Godfather finds their activities objectionable. A couple of the original oligarchs actually ended up in jail when they got involved in illicit activities.

Another sub-category of the oligarchic class is the adopted oligarchs. These people made their wealth during the early murky days of mass privatization, and it was only later that they were adopted by the political family. Their connection to politics now enhances their financial position. Examples of this type are Gábor Széles, owner of the extreme right-wing Magyar Hírlap and Echo TV, and László Baldauf, owner of the CBA chain of supermarkets. These people only serve the policies of the Family;  they can’t influence them.

The next category is the capitulated oligarchs who earlier were quite independent; some were even associated with the other political side. Their capitulation is due to their dependence on state orders. Since they were not considered to be affiliated with the Family in any way, they fell on hard times after 2010. In addition to the lack of orders, the state has all sorts of instruments to make them surrender: the internal revenue service, prosecutor’s office, police. A typical representative of this group is Tamás Leisztinger, who suffered economic hardship already during the first Orbán administration and who by now is the willing or unwilling financier of the prime minister’s hobby, football.

Then there are the fellow traveler oligarchs. These men were the greatest economic beneficiaries of the first twenty-year period after the change of regime. They were sought after by both the left and the right, and they kept an equal distance or equal friendship with both groups. After 2006 the equilibrium between the two political sides shifted toward Fidesz, which forced them to be fellow travelers unless they wanted to lose their preeminent economic positions. Sándor Csányi of OTP and Sandor Demján of Trigánit are perfect examples of this category.

The last two sub-categories are the autonomous and the rival oligarchs. Their numbers are rapidly decreasing. Some of these people are so afraid of the chief poligarch that they dare not support liberal causes at all.

Although I thought I would be able to describe the other key actors of the mafia state today, the story is so intriguing that I don’t want to shortchange you by not covering the details properly. We will continue tomorrow.