As of now there are two narratives of the event circulating in the Hungarian media. One is the government version, leaked to Napi Gazdaság, a financial paper recently purchased by Századvég, a Fidesz think tank. The other comes from the U.S. Embassy in Budapest.

Let’s start with the government version of the story. The Hungarian internal revenue service became suspicious of some American firms doing business in Hungary and launched investigations into their  finances and tax returns. The U.S. government decided to retaliate by barring several Hungarians from ever entering the United States. Behind this “diplomatic duel” are the recent critical statements of former President Bill Clinton and President Barack Obama with regard to the Hungarian government’s attacks on NGOs. The two American Democratic leaders were especially upset over the fate of the Ökotárs Foundation, the distributor of the Norwegian Civic Funds, whose tax number was recently suspended. Why this particular concern? Because, the article contends, the Norwegians are also generous contributors to the Clinton Global Initiative.

At the end of the article Napi Gazdaság casually mentions that because of the link between the American Democratic Party and the Norwegian government, the Ökotárs Foundation “will not go against the interests of the Democratic Party.” So, the Hungarian government’s investigation of Ökotárs will actually have a beneficial effect. It may “place Hungary’s reputation on neutral ground in the political warfare between Democrats and Republicans.” Here Századvég is speaking, the think tank that owns Napi Gazdaság. Századvég just received a huge contract from the Orbán government to engage in public relations/propaganda in Washington over the next few years. But there might be a bit of a problem here; as we will see later, its CEO is barred from entering the U.S., which might crimp its effectiveness.

Napi Gazdaság contacted the U.S. Embassy, where they were told that they know nothing about any investigation of American firms and that the decision of the U.S. government to bar some individuals from entering the United States has nothing to do with alleged probes by the Hungarian internal revenue service. However, they have good reason to believe that the people on the black list were engaged in criminal activities. They tried either to force American firms to give them kickbacks or to extort special favors from them. They cannot release the names because of American laws prohibiting it.

It didn’t take long for one of the people involved to arrive at the doorstep of ATV and to offer some details about the case. According to him, he and nine others were asked to visit the U.S. Embassy where they were administered the bitter pill. ATV was not allowed to reveal the name of the informer, but the article described him as “an especially important partner of the Hungarian government who currently is participating in several important projects. In the last few years his name appeared frequently in the Hungarian media…. He considers himself a businessmen who is very close to Fidesz.” There is a sentence in this report that strongly suggests that our mystery businessman is not entirely innocent. After all, he found “the measure disproportionate, which further damages American-Hungarian relations.” So he did something illegal, but he thinks that the punishment is too harsh. 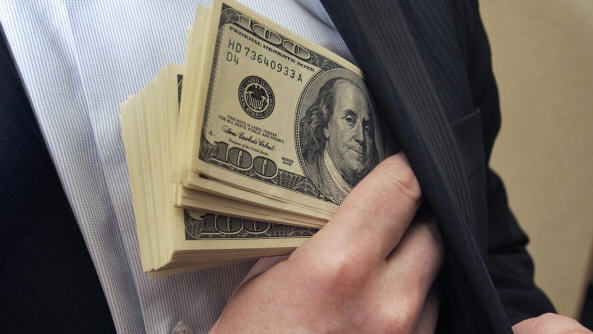 Both the Fidesz parliamentary delegation and the Ministry of Foreign Affairs and Trade reacted promptly to the news. Fidesz sticks to the story leaked to Napi Gazdaság. The United States government is putting pressure on Hungary because they want to avoid the investigation of certain American firms by the tax office. M. André Goodfriend, the U.S. chargé d’affaires, was called into the ministry, but before his appearance Judit Fülöp, the ministry spokeswoman, gave a short press conference. She stressed the Hungarian government’s zero tolerance toward corruption. She announced that they  are ready to investigate the cases but are waiting for documentation from the American Embassy.

Meanwhile investigative journalists were hard at work. From unofficial sources 444 learned that in the last year and a half there were several instances where government officials and businessmen closely associated with the government party approached American firms for kickbacks. In one case a large American firm applied for an EU grant. At first the government turned them down, but in the second round the management was told that they would receive the money but only if they hire a certain consulting firm that would perform no work at all.

A few hours later some names also appeared. Among them is Péter Heim, CEO of Századvég, the think tank that was launched by Fidesz in its infancy and that is now tasked with improving Hungary’s image in Washington. The news about the Hungarian internal revenue service seems to have been on target. Ildikó Vida, the head of the office, is on the list. Vida is one of the original founders of Fidesz. She is the same age as Viktor Orbán and was a fellow student in the college where the party was born. This is not the first time that she is in charge of the tax office. She held the same position during the first Orbán administration between 1999 and 2002. One must keep in mind that the Orbán government uses the internal revenue service as a political club. Index reported that in addition to Vida two other employees of the tax office are also involved. And then there is Árpád Habony, the eminence grise of Fidesz. He has no official position, but  he is perhaps one of the most important men behind Viktor Orbán. I devoted a whole post to him a while back. Rumors about his shady financial affairs have been circulating for some time. His source of income is shrouded in mystery. According to the latest information, Habony denies being on the list and is planning to visit the United States shortly.

On the surface the affair is solely about corruption, but the American reaction to these cases is politically charged. One has to assume that in countries with rampant corruption such as Hungary the U.S. Embassy receives reports of bribery attempts often enough. There are several ways of dealing with such cases. For instance, one can pay a visit to the country’s foreign ministry and report that such behavior is unacceptable. At the same time the American official can express his hope that in the future there will be no discriminatory measures against American firms and that extortionist activities will stop. But in this case the United States government came out with the big gun. The Americans in Budapest must have known for years about the high level of corruption in government and its satellite business circles, yet it is only now that they decided to move into high gear. This is, in my opinion, a political message to the Orbán government and part and parcel of a new, more forceful policy being conducted by the U.S. government toward Hungary.