When Viktor Orbán, however reluctantly, decided to scrap the internet tax, he undoubtedly thought his troubles were over. He would not have to worry about young people going out on the streets again to demonstrate against his government. But he was wrong. The demonstrators found plenty more to criticize, especially the regime’s systemic corruption. Since Viktor Orbán is not the kind of man who admits missteps, he and his supporters had to find a culprit, someone who was “stirring the pot.” And the most obvious candidates for such a role were the United States, described by right-wing commentators in Magyar Hírlap as “the empire,” and the “left-liberal” intellectuals at home and abroad.

Let’s start with the United States, enemy number one. Those commentators who blame the U.S. for the unfolding drama of anti-government sentiment tend to forget that it was not the United States that revealed its decision to ban six allegedly corrupt Hungarian officials from its territory. It was the Napi Gazdaság, a financial daily owned by Századvég, the think tank that has been described by a former associate as a money laundering operation. If the government hadn’t decided to leak the information about the ban, most likely today we would know absolutely nothing about Ildikó Vida and her co-workers at the Hungarian Tax Authority (NAV).

But, according to the Hungarian right, the United States’ role in this latest crisis goes far beyond its travel ban. Under the present circumstances, the argument goes, there is no possibility of carrying out an armed coup in Hungary like the one the U.S. allegedly staged in Chile in 1973. Therefore, the United States is now supporting, I suppose even financially, the opposition. “Many people believe that it was the United States that was behind the initial successes of Gordon Bajnai.” But Bajnai turned out to be the wrong man for the job.

Then came Plan B. The United States, even before the three landslide Fidesz victories, realized that “there is no chance of replacing Viktor Orbán.” But since there are no potential leaders in the opposition, André Goodfriend “became the star of the anti-government movement.” The United States has been working toward the destabilization of the country in the hope of changing the Orbán government’s foreign policy orientation. 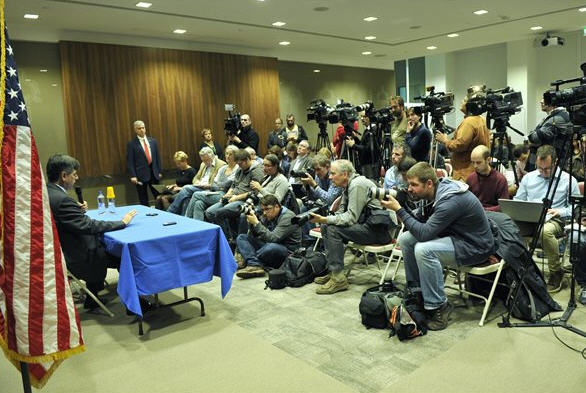 M. André Goodfriend, the star of the “left-liberals,” at a press conference

It is this American destabilization effort that explains the outrage of thousands of Hungarians against the Orbán government in front of the parliament building. The various groups that have appeared recently don’t offer an alternative, but this is not their real goal and purpose. They want to “weaken” the regime, make the “consolidation” efforts of the government impossible.

Magyar Hírlap zeroed in on the “domestic enemies.” Left-liberal intellectuals, hand in hand with the Americans, are behind the disturbances. Proof in support of this accusation is rather flimsy, but such weaknesses have never bothered Magyar Hírlap‘s Tamás Pindroch. The link between the “left-liberal intellectuals” and the United States was demonstrated by André Goodfriend’s appearance at one of the Saturday evening open houses of László Bitó, professor emeritus of ocular physiology at Columbia University who developed Xalatan, a medicine for glaucoma. And if anyone needs more proof here it is. Back in April Ágnes Heller, the philosopher, was asked during a political discussion whether something like what happened in Kiev could happen in Hungary. Heller responded that yes it could but not in the same shape and form. For example, a revolt of the hungry masses could break out.

But Pindroch’s accusations are mild in comparison to what László Földi, a former intelligence officer during the Kádár regime and even for a few years after the change of regime, had to say. He is convinced that a large demonstration like the one we saw on Monday cannot be organized on the internet and without any money. According to him, “it was a carefully prepared, well-organized and financed event.” Földi suggested that those behind the action serve foreign interests for financial gain and thus commit treason. In brief, his claim is that the United States is financing those left-liberals who are behind the anti-government protests. Földi is convinced that by now the United States will be satisfied only with the departure of Viktor Orbán. Abandoning participation in the Southern Stream will no longer suffice.

Another intriguing piece by András Dezső appeared in Index, an online site that cannot be called right-wing. Dezső is a talented young journalist who made quite a name for himself with his investigation of Jobbik’s Béla Kovács, who is accused of being a Russian spy. In this piece he proposed that there is a direct connection between a report of Human Rights First, “a little known but influential human rights organization,” and the current U.S. policy toward Hungary. The report, entitled “We’re not Nazis, but…,” made a number of recommendations to the U.S. government in general and the State Department in particular which, according to Dezső, the United States is actually following today. I wrote about this report at length and quoted some of the recommendations Dezső is talking about.

Yes, there are similarities between the recommendations of the authors of the study and the actual steps taken by the U.S. government, but I would find it strange if the staff of the Hungarian desk at State was so oblivious to what is happening in Hungary that only after reading this, by the way, excellent report did they finally decide to act. Moreover, here is something that undermines Dezső’s hypothesis. One of the recommendations of the report is to “seek commitments from Hungary and Greece to set in place policies and practices to impede high-level corruption and improve transparency and equal enforcement of the law.” But we know from the aide-memoire–what Viktor Orbán called a scrap of paper (fecni)–that Goodfriend intervened with the foreign ministry as well as the tax authorities on the subject of corruption as early as October 2013, almost a year before the appearance of Human Rights First’s study.

My hunch is that the officials of the State Department have been following the Hungarian domestic scene and Viktor Orbán’s relations with Vladimir Putin’s Russia for some time. Their concerns most likely intensified in the wake of the Ukrainian crisis. And then came the fateful June 27 “illiberal” speech of Viktor Orbán when, it seems, they decided that it was time to act. The sharp-eyed authors of the study on the Hungarian far right noticed the same problems the U.S. diplomats perceived and recommended similar remedies. But we would underestimate the diplomats in the State Department if we assumed that only an outside study woke them up and made them move.

Trying to crack down on corruption is one thing, funding and organizing demonstrations is something else. There is no evidence that the U.S. helped the demonstrators–or even that the demonstrators needed outside help. They just needed the miracle of modern communications technology.