The present political system, introduced and refined over the last five years, has wide support. Not as wide as it was in April-May 2010, but Viktor Orbán’s party still has about one million followers. This is the hardcore, those who will never question the wisdom of the Leader. Where are these people coming from? This is the question Rudolf Ungváry is trying to answer in this book. 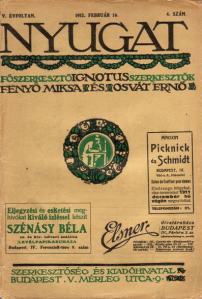 He focuses on the divide between the two political groups who, to use János Kis’s words, “have been at war with each other in the last one hundred years.” Ungváry avoids the by now practically meaningless terms “right” and “left”and instead draws the line between “democrats” and the “nemzetiek.” The former at one point were called “nyugatosok” after a famous periodical Nyugat (The West) around which they gathered. Later, between the two world wars, they were known as “urbánosok” (urbanites). They were the ones who believed in progress, they longed for western democracy, they wanted to modernize the country. The other group, the nationalists, have been suspicious of the West ever since the late eighteenth century. They rejected the imitation of western ways. Instead they glorified the common folk, especially the Hungarian peasant, who in their eyes held the key to the true Hungarian soul. It was from this group that the so-called “népiesek” came, a group of writers and sociologists who spent their creative energies writing novels and studies about the Hungarian peasantry. This latter group can be profitably compared to the Russian narodnik movement. And continuing to use Russia as a point of reference, the Hungarian divide between these two groups is analogous to the nineteenth-century Russian Westernizer and Slavophile movements.

Because of the relative backwardness of Hungary, the liberal group remained small even as, especially after the end of World War I, the Hungarian right gained considerable momentum. These people were never enamored of the West, but their dislike of Western ways intensified since they blamed the western powers for the cruel fate that befell their nation. The number of civil groups formed by extreme right-wingers multiplied. The people who gathered in these associations were sworn enemies of liberalism, they harbored a real hatred of the Hungarian industrialists who were mostly of Jewish origin, they were against modernization, they put their faith in the Hungarian peasantry, and above all they wanted to reconquer their land from the Jews. Some of them imagined a “third road” which would enable Hungary to create a unique system which was neither capitalism nor socialism. The incredible thing about all this is that these concepts, which people thought had long been forgotten, were revived after the change of regime. The “népiesek,” “nemzetiek” gathered in MDF while the “nyugatosok,” “urbanites” established SZDSZ. And there was even talk about the “third road,” naturally promoted by politicians of MDF.

Ungváry analyzes the results of the 1939 election, which proved to be an eye opener. According to a law enacted in 1925, only inhabitants of larger cities could vote by secret ballot. In the villages voting was open. In 1938, the secret ballot was introduced everywhere. The result was an incredible growth of the extreme right Arrow Cross Party of Ferenc Szálasi. On the right there was also a large group of voters whom we usually refer to as “the Christian middle class” or “keresztény úri osztály.” The liberals and socialists were in the great minority all through the interwar period, but after 1939 they became truly irrelevant. And yet a few years later this large mass of right-wing voters disappeared into thin air. Or did they?

With the Soviet occupation and the subsequent establishment of the Rákosi regime the members of the Hungarian right had no place in political life. Right-wing parties were forbidden to enter the early post-war elections, and therefore the proponents of the Hungarian right couldn’t go through the kind of development that took place in countries occupied by U.S., British, or French troops. The ideas of the Hungarian right became frozen in their pre-1945 form, only to reemerge after 1990 to the great surprise of liberals and socialists. And with their reemergence came the growth of the extreme right, anti-Semitism, anti-capitalism, and anti-democratic ideas.

Members of the Hungarian right carried on the “nemzeti” tradition within their own families, passing on to their offspring family traditions, including stories of the grievances they suffered at the hands of the communists. A lot of people felt they were victims of the regime, perhaps more than the actual numbers warranted. Family stories became inflated. Suddenly everybody had a peasant grandfather whose whole crop was taken away by force. These are the people that today are the loyal followers of Viktor Orbán, whose own family was not a victim but rather a beneficiary of the socialist system.

Rudolf Ungváry in his other works often talks about the fact that Hungary was and still is a country where the “nemzeti” right-wing people are in the majority. A few years back he engaged in a lively debate about this thesis with such academics as János Kis and Zoltán Ripp. If we accept Ungváry’s division of the two political sides as “democrats” and “nemzetiek,” then I’m afraid the “democrats/liberals” were definitely a minority before 1945. What the situation is today we don’t know, although within a couple of years we should have a fair idea of the relative strength of the democrats and the non-democrats.

Ungváry stresses the importance of political culture, which determines the state of a political system. Although the Hungarian democratic tradition has been weak so far, perhaps one day Hungarians will be able to say loud and clear: “I am … a mortal enemy to arbitrary government and unlimited power. I am naturally very jealous for the rights and liberties of my country; and the least appearance of an encroachment on those invaluable privileges is apt to make my blood boil exceedingly.” It was the sixteen-year-old Benjamin Franklin who uttered these words in 1722. It is that kind of political culture which has been missing in Hungary.