Viktor Orbán must have had a rough couple of days. First came the bad news that Vladimir Putin had cancelled the Southern Stream project, and then yesterday John McCain, the Republican nominee for president in 2008 and chairman of the Senate Foreign Relations Committee, lashed out at him. In a speech delivered prior to the vote on Colleen Bell’s appointment to be the next U.S. ambassador to Hungary he gave a long list of objections to her appointment. The upshot was that McCain considers Hungary to be a strategically important country where a seasoned diplomat should head the mission instead of a political appointee.

Whoever collected information on Hungarian politics for McCain did a good job. Anyone who’s interested in knowing exactly what transpired can watch the video. The passage that caused outrage in Hungarian government circles came toward the end of McCain’s venting of his frustration:

We’re about to vote on a totally unqualified individual to be ambassador to a nation which is very important to our national security interest. Her qualifications are as a producer of the television soap opera “The Bold and the Beautiful,” contributed $800,000 to Obama in the last election and bundled more than $2.1 million for President Obama’s reelection effort. I am not against political appointees. I understand how the game is played, but here we are, a nation that’s on the verge of ceding its sovereignty to a neofascist dictator getting in bed with Vladimir Putin and we’re going to send the producer of “The Bold and the Beautiful.”

Zoltán Kovács, undersecretary in charge of foreign communication, is usually the first to raise his voice. He announced that “Hungarian diplomacy will immediately get in touch with American senator John McCain,” but he added that from the text it is clear that McCain was not talking about the Hungarian prime minister but about Vladimir Putin. Kovács’s most likely intentional misreading of the text could not be maintained for long because several Hungarian newspapers and television stations got in touch with the communication director of Senator McCain, who affirmed that there was no mistake. The senator was indeed talking about Viktor Orbán.

The Ministry of Foreign Affairs and Trade moved into action and called in M. André Goodfriend, the U.S. chargé d’affaires, to tell him, I assume, how wrong McCain was about Viktor Orbán. Considering that McCain is a Republican, I can’t quite see what Goodfriend as a representative of the Democratic Obama administration is supposed to do about McCain’s assessment of the Hungarian political situation.

And yesterday Péter Szijjártó announced that McCain must have based his opinion about the Hungarian prime minister on the antagonistic media because if he knew the real situation he would never call Orbán a neo-fascist dictator. The Hungarian response to any negative reaction to the Orbán government is always the same: The Hungarian citizens voted for this government three times this year and everybody should respect their decisions. Szijjártó also indicated that the Hungarian Embassy in Washington will get in touch with the staff of Senator McCain and will inquire about “the background of his statements” concerning the Hungarian prime minister.

Gergely Gulyás, a member of parliament and one of the deputy presidents of the assembly, was blunt. According to him, the “veteran senator for a short period of time lost his critical faculties.” Some pro-government journalists also used strong words. András Stump of Válasz called the 78-year-old senator “senile, ancient” (agg, vén) and not to be taken seriously. András Bencsik, editor-in-chief of the far-right Demokrata, called him an idiot. Another right-wing commentator again alluded to McCain as being incoherent during the session. But he did not stop there. He accused McCain of being far too friendly with Ukrainian Nazi politicians. And then he came to the crux of the matter: why is Hungary suddenly so important to the United States? Because of the United States’ interest in selling American shale gas to Europe. The Americans have become worried about Hungary being a middleman between Russia and Europe, which may result in their supplying all of Europe with Russian gas instead of their own. Otherwise, all the rest about democracy, about the illiberal state, about NGOs is of no interest to the United States. They are only excuses that mask the real intent. 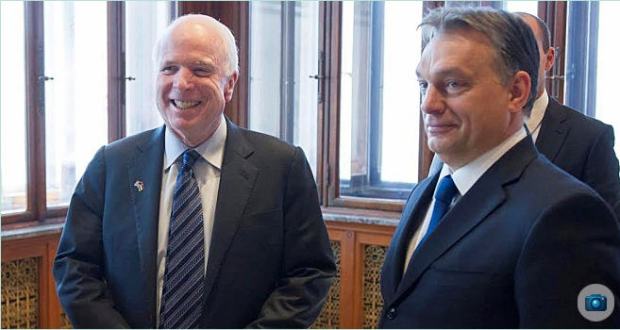 John McCain in Budapest, January 2014
Despite the compulsory smiles, McCain was not too happy even then

Of course, this story our man concocted is total nonsense, but what is really worrisome is that the official advisers to the Hungarian government, the great “political scientists” of Századvég, also seem to think along the same lines. Yesterday I cited some foreign policy experts who actually know their subject but who have been dropped from the ministries or, if they work in independent research institutes, are never consulted. On the other hand, we know that Századvég has allegedly supplied the government in the past four and a half years with thousands and thousands of pages of advice on domestic and foreign policy strategy with which, it seems, the Orbán government is completely satisfied. What kind of advice is supplied to the Hungarian government is well demonstrated by an article by Gábor G. Fodor, the strategic director of Századvég, which was published on December 1 in Napi Gazdaság, the paper owned by Századvég.

Very briefly summarized, the United States’ interest in Hungary and the East-Central European region is dictated by one consideration only: getting rid of the Russian monopoly over the gas supply in the region. All the attacks on Hungary in the last few months have served this purpose. The U.S. has a master plan: (1) Ukraine must fall into the sphere of American influence; (2) the United States wants to stop the building of the Southern Stream; and (3) the Americans intend to prevent the Russian purchase of the MOL shares in the Croatian oil company INA. The goal is “a total change of monopoly of gas supply in the region.” Hungary is at the center of this master plan and surely this is why Hungary suddenly became such an important country for the United States. Hence the attacks against the Orbán government.

Can you imagine what kind of Hungarian foreign policy can be based on G. Fodor’s “analysis”? I shudder to think.

I am not at all sure that Hungarian diplomacy in its present state can successfully navigate through the perilous sea Hungary managed to get itself into thanks to the brilliant strategy of Viktor Orbán. Until recently the Orbán government was certain that a Republican administration would have closer and warmer relations with them, but after McCain’s outburst they must realize that even if the Republicans win the next election Hungary will remain a pariah in Washington, unless some miracle happens in Budapest. Like Viktor Orbán vanishes from Hungarian politics. And that at the moment does not look likely.