Today I would like to share a letter written by Szabolcs Kerék-Bárczy and addressed to three American-Hungarians active in Hungarian affairs–Maximilian Teleki, Frank Koszorús, Jr., and Eugene Megyesy.

Szabolcs Kerék-Bárczy began his career as secretary to Prime Minister József Antall’s chief-of-staff. During the socialist-liberal government of Gyula Horn he attended Harvard University and received his master’s degree from the John F. Kennedy School of Government. After Viktor Orbán won the election in 1998 he returned to the prime minister’s office as chief-of-staff of István Stumpf, the minister in charge of the office. Between 1999 and 2001 he was adviser to the foreign ministry. Between 2001 and 2004 he served as Hungarian consul in Los Angeles. Later he served in various capacities in the Ibolya Dávid-led MDF until 2010. He describes himself as a liberal conservative. Currently he is a member of the presidium of the Democratic Coalition (Demokratikus Koalíció). 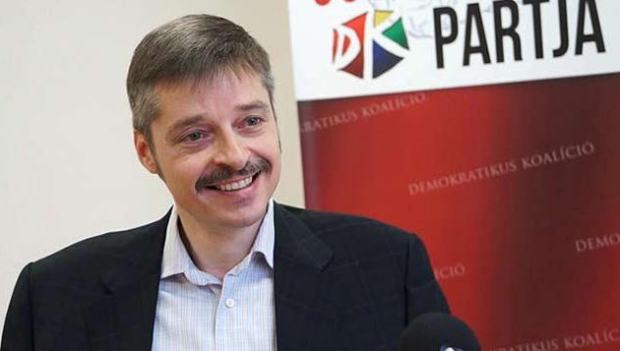 Maximilian Teleki is the president of the Hungarian American Coalition, which describes itself as a politically independent group standing up for Hungarian interests in the United States. In fact, the Coalition is closely associated with the Hungarian right and with defenders of Viktor Orbán and his policies. The same can be said about The American Hungarian Federation, whose president is Frank Koszorús, Jr. Koszorús just received high honors from the Orbán government. The third recipient is Eugene Megyesy, an environmental lawyer who used to be associated with the Colorado law firm Dufford and Brown. Formerly he was honorary general consul of Hungary in the region. Currently he is an adviser to Viktor Orbán.

It was only yesterday that Teleki, who by the way does not speak Hungarian, defended Viktor Orbán and questioned the United States’s right to criticize “democratic developments” in other countries. And, he continued: “Can our wisdom override the will of the people?” He is deeply ashamed of the superficiality of American politics and media when it comes to judging Orbán’s Hungary. He is deeply disappointed, and his trust in “our leaders has been shaken.”

Judging from Maximilian Teleki’s reaction, I doubt that he or any of his fellow American-Hungarians will take to heart Szabolcs Kerék-Bárczy’s request “to live up to the democratic heritage you cherish in America.”

As you are aware several senior Hungarian individuals have recently been banned from the USA by the application of Presidential Proclamation 7750. This is an absolutely shocking and unprecedented action within the transatlantic community because it means that a) the US government considers persons close to the Hungarian government a direct threat to US national security and b) the US administration supposes that these individuals would not be persecuted for their alleged unlawful activity in Hungary. By this the US government says nothing less than Hungary is not a democracy because in a democracy illegal activities are investigated and punished.

The application of PP 7750 was preceded by other worrying events. Formerly President Obama stated that “from Hungary to Egypt, endless regulations and overt intimidation increasingly target civil society”. President Bill Clinton was even more straightforward when he said in the US Daily Show that Mr. Orbán was an admirer of “authoritarian capitalism” and never wanted to leave power. “Usually those guys just want to stay forever and make money” he added. This week Senator John McCain called Mr. Orbán “a neo-fascist” leader and he also stated: “Prime Minister Orban has justified his actions by calling for a new state model based on ‘illiberal democracy,’ but his vision defies the core values of the European Union and NATO. Please note that nobody attacks Hungary or the Hungarian people, only certain concrete actions of the Hungarian government! While one may consider the plentiful critical and even harsh journalistic statements that have appeared in the international media partial or exaggerating, similar statements by senior US officials must be taken seriously. Because all of us are sure that US presidents, the secretary of state and congressmen are interested in nothing else but the stability of the transatlantic alliance, the spread of liberal democracy and the prosperity of our community.

If all of this is true we must seriously analyze the facts that led our American friends arrive to the above mentioned conclusions. These facts have been published widely in the past four years. For example, Secretary Hillary Clinton referred to these some time ago and several official documents reflect US concerns. The US administration has always been consistent: they observed problems, consulted with relevant Hungarian authorities and officials, made statements when repeated consultations did not produce results and then acted. The US concerns regarding the measures of the Hungarian government (e.g. the slow abolishment of checks and balances, curtailment of the freedom of press and civil liberties, structural corruption, fight against free market economy etc.) naturally result in actions. Responding to these concerns the Hungarian government has always been cynical and aggressive and no progress has been made in order to improve democratic processes and transparency in the country. In fact, from a democratic point of view, the situation in Hungary has deteriorated dramatically in the past few years.

Knowing you for ages and being aware of your commitment to liberal democratic values, I ask you where you stand on these concrete issues? This is time to be explicit and no dubious speech is accepted. You have helped the opposition of the dictatorship before 1990 and contributed significantly to the democratic changes twenty-five years ago. I am sure we share the same values and that is why I am very concerned that you are silent about the Orbán government’s activities. A lot of people call you friends of Hungary and they wait for you to speak up for everything Viktor Orbán and Fidesz is fighting against: freedom of speech, religion, enterprise, and transatlantic principles. We Hungarian democrats and proud patriots want to get ever closer to the West where our sovereignty can be complete: we know that there is no alternative for us to the EU and NATO and anybody who challenges these organizations is against both Hungarian and US interests. We also want to live in a regulated but free market economy that is based upon stability, security and trust, the rule of law, the respect of private property and equal opportunities. We refuse any discrimination among persons because we believe in the unquestionable respect of human dignity.

I respectfully ask you to live up to the democratic heritage you cherish in America, your Hungarian roots as well as your distinguished and well applauded accomplishments in the Hungarian-American community. Please, make clear that your friends are Hungarian democrats no matter what party they represent, if at all, and your foes are those, regardless of their party affiliations, who tear down the firm wall between democracy and dictatorship. Let us join forces and make a common statement in which we 1) confirm our commitment to liberal democracy, free market economy and our transatlantic community, and 2) condemn any attempts that weaken or demolish these ideals: our common ideals we have been fighting for on both sides of the Atlantic.

I look forward to your response.

Szabolcs Kerék-Bárczy
Member of the Presidium of Democratic Coalition