Yesterday afternoon Colleen Bell, the new U.S. ambassador to Hungary, arrived in Budapest. Earlier I devoted several posts to her appointment and to difficulties she experienced before the Senate Foreign Relations Committee. After her nomination I expressed my dismay, not because I had anything against Ms Bell but because I considered the political situation in Hungary so serious that I thought it would behoove U.S. interests to have a career diplomat representing the American government. I am, however, prepared to wait to see what happens. Is the new ambassador a quick study? Will she be able to assess the Hungarian situation in all its complexity in a relatively short time and not succumb to Fidesz wiles? We don’t know. As a former diplomat friend told me, he served under some very bad ambassadors with diplomatic experience and some excellent ones who were political appointees.

By all signs the Hungarian government is greatly relieved that M. André Goodfriend will no longer be running the show. I suspect that they think that with Bell’s arrival American-Hungarian relations will assume an entirely different complexion in Hungary’s favor. From what I gather from comments written about her on Hungarian Spectrum, quite a few readers fear that she will be a pushover. I suspect that a good number of government officials think the same; she’s a woman, after all, and Hungarian society is male-dominated. Gergely Prőhle, former assistant undersecretary in the foreign ministry, specifically referred in an interview to the new ambassador’s sex and her role as a mother of four, qualities which in his opinion might help to improve the atmosphere between the two countries. Prőhle added that by coincidence the newly appointed Hungarian ambassador to Washington, Réka Szemerkényi, is also a woman with four children. So, while one woman will be working in Budapest for good relations between the U.S. and Hungary, the other will be winning hearts and minds in Washington. The charm offensive is on. It seemed to have worked with Bell’s predecessor, Eleni Tsakopoulos Kounalakis. Perhaps it will work again.

Oh, yes, Réka Szemerkényi. She still has not occupied her post in Washington because apparently she has not received the so-called “agrément,” her formal acceptance by the United States as the next Hungarian ambassador. More than two months have gone by since her appointment. It seems that Washington is in no hurry to recognize her as the head of the Hungarian embassy. The official who leaked this information to Népszabadság complained bitterly about the American response, especially since they “waited for Colleen Bell with a bouquet of roses without thorns” at the airport and since President János Áder announced that he would receive her two days after her arrival so she could present her credentials and begin her work as early as possible.

What is wrong with Réka Szemerkényi? Why is the U.S. dragging its heels, other than to express its general disapproval of the Hungarian government? From Szemerkényi’s curriculum vitae she seems to be highly qualified. Upon receiving an M.A. from ELTE (Budapest) in 1991, she spent a year at the Institut Européen des Hautes Études Internationales in Nice (1990-1991). Two years later she received an M.A. in International Relations and Strategic Studies from The John Hopkins University, School of Advanced International Studies in Washington, D.C.  (1993-1995). From Washington she went to London where she spent a year as a research associate at the International Institute for Strategic Studies (1995-1996). From here her career took her straight to Fidesz, where she began as senior foreign policy secretary for the Fidesz parliamentary caucus (1997-1998). Her political career really took off after Fidesz won the election in 1998. She first became undersecretary in the prime minister’s office and later foreign policy and national security adviser to Viktor Orbán (2000-2002).

While Fidesz was out of office she worked at research institutes related to Fidesz and earned a Ph.D.in economics at the Péter Pázmány Catholic University in 2007. After such a distinguished academic career, her decision to attend a university with a less than sterling reputation is somewhat baffling. But she also stooped low enough to become a senior associate in the Institute of Kremlinology at the Gáspár Károli Reformed University which is led by the Miklós Kun, grandson of Béla Kun of Hungarian Soviet Republic fame, who turned from rabid Marxist to rabid right-winger. Szemerkényi’s entire professional career has been tied to right-wing politics, not just as a high government official but also as a party member. In 2009, for example, she was #17 on Fidesz’s EP list but only the first 14 made it. 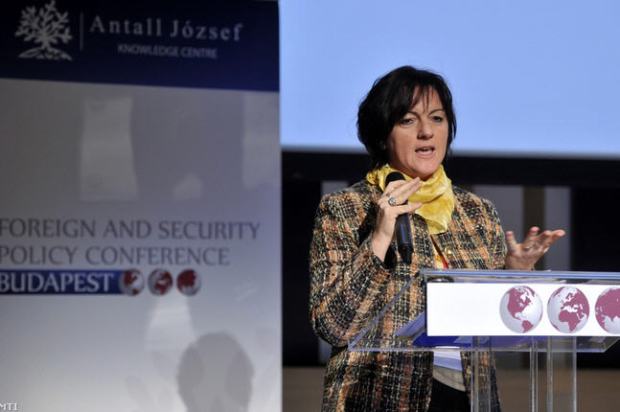 In the last four or five years in her capacity as chief adviser to Viktor Orbán, she was heavily involved in the negotiations over the Southern Stream. In September 2013 when the leaders of the Southern Stream and Gazprom made their case in Milan for the pipeline’s value, it was Réka Szemerkényi and Dragutin Matanovic of Serbia who presented the points of view of the partner countries. When it became known that the United States government listened to telephone conversations of European politicians, it was Szemerkényi’s job to present the Hungarian position on the matter to the American government. According to an MTI report, she demanded answers from the United States, but of course we have no idea what actual steps she took and how the issue was settled between the two countries. At that time she still considered the Trans-Atlantic Trade and Investment Partnership a right step in the right direction “which benefits both sides.” As we know, that is no longer the Hungarian government’s position. As Attila Ara-Kovács pointed out, “the former deeply committed atlantist has become a vehement defender of the new policy that no longer concentrates on Washington.”

Ara-Kovács made his observation at the time it was leaked that Viktor Orbán had no need for Zsolt Németh, undersecretary of János Martonyi, at the foreign ministry. Obviously, he was far too committed to the transatlantic ideas he and Martonyi represented during their times in office (1998-2002 and 2010-2014). Apparently Orbán offered Németh the ambassadorship to Washington but Németh, I think wisely, did not accept. No ambassador can improve relations between the U.S. and Hungary as long as Viktor Orbán is the prime minister. Not even a mother of four. I don’t know of course whether Zsolt Németh would have been more welcome in Washington, but Szemerkényi, although she might be well qualified for the job, is known to blindly follow the party line. In Hungarian these people are called “party soldiers.” One of Index‘s sources said that Orbán and Szemerkényi are so close that her appointment practically means the presence of Viktor Orbán in Washington. I’m sure that the idea of having the clone of Viktor Orbán in the Hungarian Embassy in Washington doesn’t warm the cockles of anyone’s heart in the U.S. capital.