It’s time to return to the state of the Hungarian opposition which, given its daunting electoral challenge, should be united and pursuing a politically savvy course. Instead, it remains fragmented and for the most part bumbling.

In late September Medián found that the great majority of left liberals would like to have a single list and joint candidates in each of the 106 districts. So far the opposition hasn’t heeded their call.

Then there was Solidarity’s demonstration at which a styrofoam statue of Viktor Orbán was toppled. Solidarity’s alleged allies, Együtt 2014-PM and MSZP, distanced themselves from Péter Kónya’s “street theater.” They thereby lent credence to the position of Fidesz and KDNP politicians who claimed that this symbolic act was tantamount to an actual assassination of Viktor Orbán. The only opposition politician who stood by Péter Kónya was Ferenc Gyurcsány. As far as I know, Kónya is planning new street performances. Whether Együtt 2014-PM and MSZP embrace these activities or whether Solidarity ends up joining forces on a national level with DK remains to be seen.

But let’s not get ahead of ourselves. Let’s see what is going on within Együtt 2014-PM. First of all, it will soon be called something else, which I consider a blessing as long as they come up with a decent name for a party. Most people, I assume, know that Együtt 2014 was the original name of Bajnai’s group to which PM (Párbeszéd Magyarországért = Dialogue for Hungary), another ill-chosen name for a party, was tacked on. PM comprises the ten or so former LMP members and their followers who broke with András Schiffer.

The name change is necessary because Együtt 2014-PM is not a party. The PM people insisted on maintaining their independence, and therefore this cobbled-together creation was a party alliance formed only for the election. But there’s a problem with this arrangement. The threshold for parliamentary representation for a party alliance is 10% as opposed to 5% for a party. And, according to the latest polls, E14-PM has only a 6% share of the votes. Naturally, the party’s spokesmen insist that the polls are all wrong and they have at least twice that much. It seems, however, that their socialist friends take the polls seriously and keep pressuring the Bajnai crew to create a real party just in case. Viktor Szigetvári, co-chairman of the party, just yesterday in an interview with HVG confidently announced that they’re aiming to capture 20% of the votes at the election, but at the moment that goal cannot be taken seriously.

At the same time that Együtt14 is losing support, Ferenc Gyurcsány’s Demokratikus Koalíció is gaining ground. According to Medián, DK actually surpassed E14 among those who are certain that they will vote at the next election.

HVG, an influential and well-informed media outlet, has been watching the shifts that have been occurring on the left. Within the course of one week HVG published two articles indicating possible changes that might have to be made to the Bajnai-Mesterházy deal. On September 4 the paper reported that its sources in E14 and MSZP admitted that “Gyurcsány revived” even though they tried to minimize the significance of the changes in DK’s standing. They conceded, however, that DK’s momentum highlights “the contradictions inherent in the Mesterházy-Bajnai agreement.”

Meanwhile Ferenc Gyurcsány is taking advantage of the shifting public sentiment and is campaigning aggressively. He promised to continue his nationwide campaign unabated until the Christmas holidays.

You may recall that after the appearance of Gordon Bajnai DK lost about half of its earlier support. András Kósa of HVG wondered whether perhaps these earlier DK supporters, disappointed in E14’s performance, are now returning to DK. It is also possible that some MSZP voters who want a single opposition party list are shifting their support to Gyurcsány, the only opposition politician who insists on a single list, which is, in his opinion, the key to electoral victory.

HVG‘s article also said that DK leaders are ready to recruit new supporters even at the expense of E14 because that would force the renegotiation of the Bajnai-Mesterházy agreement. Gyurcsány, in fact, began to criticize both Gordon Bajnai and Attila Mesterházy. A few days ago he complained about the lukewarm campaign style of Bajnai. In a lengthy interview with the Austrian Der Standard he claimed that Bajnai and Mesterházy are the ones who fear competition from him. And only yesterday he said that in the coming campaign one needs not only goalies but forwards as well. This was a reference to Bajnai who plays amateur football as a goalie and who described himself as a political goalie rather than a forward. 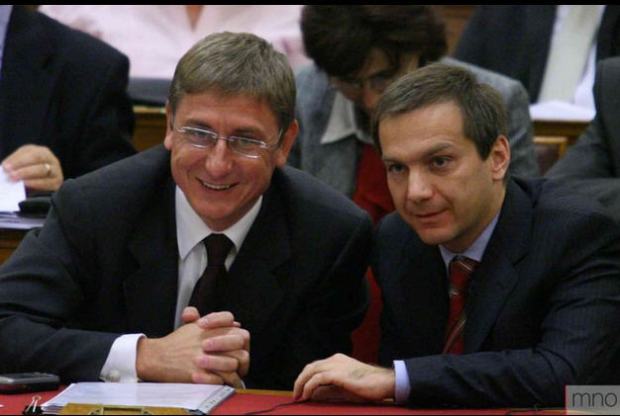 Today HVG came out with another article based on E14 and MSZP sources. Gábor Gavra, editor-in-chief,  joined András Kósa in taking responsibility for the information gathered. They learned that Együtt 2014 has a solution to the DK problem. If it turns out that because of a strengthening DK negotiations between E14 and MSZP must be reopened, E14 would give up two districts and would expect MSZP to turn over six districts to DK. There was a sentence in the Szigetvári interview that pointed to a potential thaw in relations with DK consistent with such a renegotiation. When asked whether there is any possibility of an understanding between E14 and DK, Szigetvári answered that “There is a chance, and a wide collaboration is in the interest of the opposition. E14 will not stand in the way.”

Unfortunately the hypothetical E14 offer is not as generous as it seems. The two districts they are willing to give DK are Fidesz strongholds. Of the six districts that belong to MSZP at present only two could possibly be won by an opposition candidate. An unnamed DK politician’s reaction undoubtedly reflects the feelings of the DK leadership and the 8,700 party members: “What magnanimity! Two parties with approximately the same popular support and Együtt will keep 29 and will give us two. This doesn’t even deserve comment.” Apparently one DK politician who is a member of the presidium said that they would be happy with a 60-40 split of the 31 districts E14 currently has as a result of the Bajnai-Mesterházy pact. But such a split would deprive E14 of being able to have a separate party list.

Gordon Bajnai immediately denied that E14 has been thinking about reopening negotiations with MSZP. That  may even be true in the strict sense of the word. However, every party has to have contingency plans, especially if MSZP insists on reopening negotiations in the eventuality of a further fall in E14’s popularity.

As far as Gyurcsány’s strategy is concerned, I’m becoming convinced that he is trying to force the hand of the opposition parties to come up with a common list. This may in fact become a necessity if neither E14–or whatever it is called by then–nor DK could have a party list. In this case a single list would be the only option. Polls over the next two months or so will undoubtedly help shape the strategy the opposition parties will have to adopt.