Surprise! Yesterday late afternoon when most likely Viktor Orbán and his entourage, numbering some 120 government officials and businessmen, had already boarded the plane to Istanbul, the prime minister’s press department announced his trip to Turkey. The schedule was crowded. That same evening Orbán opened the Hungarian House, a cultural center, and a Hungarian trading center, both in Istanbul. And he still had energy to deliver a speech before Hungarian and Turkish businessmen about the great prospects that Turkish-Hungarian economic relations offered to both countries.

According to the prime minister’s website, Orbán’s speech was delivered in front of about 200 people, which leads me to believe that the Turks were in the minority at the event. However, those present could learn that “foreign capital is arriving in Hungary at an exceptionally fast pace” and that the Orbán government “had already laid the foundations of a successful Hungarian economy of the future.” When I hear such brazen lies from Viktor Orbán, I really wonder whether perhaps his ambitious plans for expanding Hungary’s horizons toward the business world outside of the European Union falter in part because of such claims that lack any foundation whatsoever. Surely, the businessmen who attend these gatherings are well informed on economic and financial matters, and therefore they must know that it is simply not true that foreign capital is pouring into Hungary. In fact, exactly the opposite is the case. The same must be true about the business friendliness of the Hungarian government when all foreign financial papers are full of stories about the incredible governmental attacks on the banking sector and multinational firms operating in Hungary.

This morning he gave another speech entitled “Hungary and Europe in a Changing World” at the Marmara University in Istanbul, where he also received an honorary doctorate for his work on Turkish-Hungarian relations and for his efforts on behalf of Turkey’s quest for membership in the European Union. Here he expounded on his ideas about the future of the European Union which in his view will be successful only if it expands and includes Turkey and the Balkans. At the same time, member countries should have more say in conducting their own economic policy. He also claimed that the European Union’s “relations with Russia must be reevaluated.” Gépnarancs.hu reminded his readers that Gábor Vona was also a guest of the University only a month ago. He didn’t get an honorary degree, however, only a plaque from the dean of the university for his efforts at  reviving Turkish-Hungarian traditions.)

I mentioned only a couple of days ago that Péter Szijjártó, who by the way accompanied Viktor Orbán to Turkey, expressed his hope that the Israelis would take advantage of Hungary’s enormous gas storage facilities. It seems that  negotiations with Turkey to the same end were already under way. Magyar Földgáztároló Zrt. (Hungarian Gas Storage Corp.) and the Turkish Naturgaz signed a letter of intent. A similar agreement was signed between Eximbank, a Hungarian export-import bank, and the Industrial Development Bank of Turkey (TSKB). The Hungarians emphasized that the storage of Turkish gas in Hungary wouldn’t need any further work on infrastructure because the pipeline between Turkey and Hungary already exists.

Today the Hungarian delegation moved on to Ankara where Orbán met Abdullah Gül, the president of Turkey. I do hope that he was well prepped and didn’t praise Prime Minister Recep Tayyip Erdogan, whom he obviously greatly admires. The night before at the opening of Magyar Ház he said: “Thirteen years ago, when I last came to Turkey, there was a different prime minister in the country and different politics. Now 13 years later, I can see huge differences, not only in technical terms, but also developments with roads and bridges, as well as high-speed train projects, buildings, and also the people who believe in their strength.” It is a known fact that Gül’s relations with Erdogan are anything but friendly, mostly because of Erdogan’s authoritarian rule. Only recently Gül hinted that he was prepared to challenge Erdogan, who is contemplating a run for the presidency next year. Erdogan has been prime minister of Turkey since 2003 and under rules adopted by his own party is barred from seeking a fourth term as prime minister. Therefore he has his eye on the presidency.

The joint press conference held by Erdogan and Orbán reflected their mutual admiration. These two are soul mates.

Hungary received a gift from Erdogan: Hungarians no longer need a visa to visit Turkey. In turn, Hungary made it as easy as possible for visiting Turkish businessmen, artists, and athletes to stay in Hungary for extended periods of time. In return, Erdogan promised that the Visegrád countries will be the most important trading partners of Turkey. 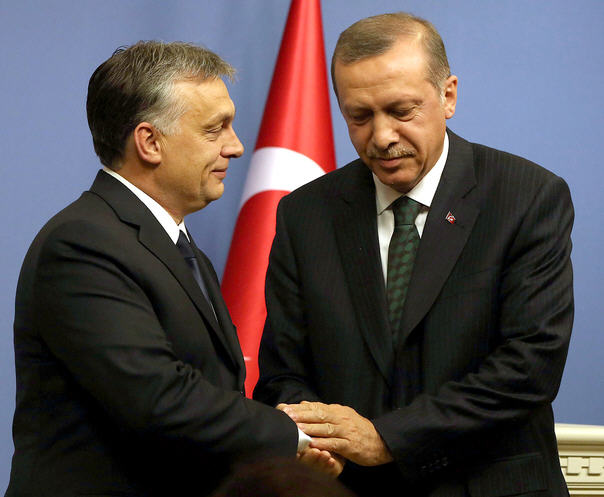 Orbán naturally emphasized Hungary’s support for Turkey’s integration into the European Union. He expressed his firm belief that Turkish citizens shouldn’t be required to have visas to travel in countries of the European Union. Such a gesture wouldn’t be a “gift but a sign of appreciation of the fantastic Turkish economic accomplishments.” Again, he went over the top when he announced that without Turkey’s presence in the European Union “it will be impossible to turn around the current economic tendencies” in Europe. Turkey’s message to Hungary is that “one’s own road is always the best road” to success. Finally, the Hungarian government will give 150 scholarships to Turkish students who wish to study in Hungary. One can certainly admire Orbán’s generosity when he vetoed all efforts at giving scholarships to Hungarian students. They can get only student loans.

Members of the two governments conducted the first meeting of the joint council of strategic cooperation just established between Turkey and Hungary.

MTVA, Orbán’s new organ in charge of funneling news to the Hungarian state television and radio, and TRT, the Turkish public radio and television, also signed an agreement. Another was signed by MTI and the Turkish Anadolu Agency. One should note that for the second year in a row Turkey jailed more journalists than any other country (with Iran and China close behind) according to an annual report released by the New York-based Committee to Protect Journalists. Forty journalists are currently in jail in Turkey. In Hungary, at least, no journalist has yet been incarcerated.