Today’s topic is the Hungarian police’s decision not to investigate the attack on a Roma family in Devecser, one of the villages that earlier fell victim to the red sludge that covered acres and acres of land around a factory producing aluminum. I didn’t deal with this specific incident except as one in a series of anti-Roma attacks by far-right groups during the summer of 2012. However, here is a description of what happened on August 5, 2012 from The Economist. “You are going to die here,” shouted members of a 1,000-strong march as they stopped at houses they thought were a home to Roma, hurling their water bottles and stones to emphasize their point.” The Economist also mentioned that “not a peep of condemnation [came] from Fidesz.”

Ever since that time the Hungarian police have been investigating, taking their sweet time trying to ascertain whether a crime of incitement against the Roma minority occurred in Devecser. One would think that it shouldn’t take a year to come to the conclusion that inciting a crowd to kill people is a crime. But it seems that in Hungary it takes the police a year to decide the opposite. The police in Veszprém county announced a week ago that they found that no crime had been committed and they therefore stopped the investigation. According to the Hungarian Helsinki Committee and TASZ, the Hungarian equivalent of the American Civil Liberties Union, it was a clear case of incitement and there was a good chance that the court would hand down a verdict against the neo-Nazi groups present in Devecser. But the Hungarian police prevented that from happening.

Before the attack on houses of Gypsies several extremist leaders gave speeches in which they called on their audience to kill the Roma. How else can one interpret such a sentence as “we must stamp out the phenomenon; we must exterminate it from our Lebensraum.” According to the Criminal Code, this kind of incitement against an ethnic group is a serious crime that may result in three years of jail time. Moreover, as a result of these speeches the crowd actually went on a rampage. The Gypsies under siege feared for their lives. 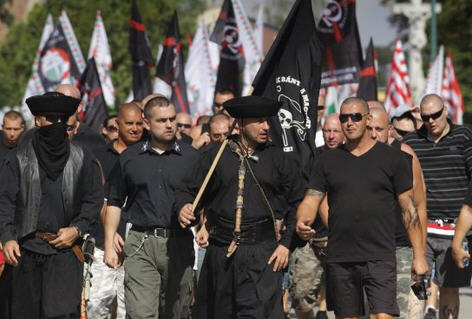 Marching toward to the Romas’ houses in Devecser, August 5, 2012

How can the police explain dropping the investigation for lack of evidence? According to them, the person “who incites doesn’t address the intellect but appeals to primitive instincts which may result in possible action.” In their opinion, the utterances in this case “did not contain intemperate, antagonistic statements that may induce maleficent action.” What could be heard from the leaders of these extremist groups, according to the police, may be offensive to the Roma population and morally reprehensible, but these extremists cannot be punished by the instruments of the criminal justice system.

Organizations involved with human rights cases decided to appeal the case. One group, called Tett és Védelem Alapítvány (Action and Defense Foundation), will appeal to the Constitutional Court. The president of the Foundation told members of the media that in the last nine months he himself reported 28 cases involving incitement against minority groups but they were all ignored by the police. A day later, however, we learned that there will be an investigation into the case of a member of the far-right crowd in Devecser who, most likely unintentionally, hurled a rock at a Jobbik member of parliament, who as a result suffered a slight head injury.

Meanwhile another case emerged that sheds light on the thinking of the Hungarian police when it comes to hate speech and incitement against minorities. One of the speakers in Devecser was Zsolt Tyirityán, leader of the Army of Outlaws. On October 23, 2012, he delivered another speech in Budapest; this time the targets were the Jews. He vented his hatred of certain Jews who “should be put into freight cars and taken a good distance away and put to work.” The Tett és Védelem Foundation again demanded a police investigation of this incitement case, but the Budapest police refused to investigate. The reasons? One was that this speech is still on YouTube because not enough people complained about the speech’s content. Otherwise, YouTube would have removed it. And the second was that one cannot talk about incitement when “the whole audience shares the speaker’s ideology .” In this case we “should rather talk about agreement of the participants.” So, it seems that according to the Hungarian authorities one can speak of incitement only if not all listeners agree with the speaker. 168 Óra, which reported on the bizarre police rationalization for not investigating, gave the following title to the article: “According to the police one can deliver a Nazi speech before Nazis.”

But don’t fear, the Hungarian police are quite ready to act when it comes to members of national minorities. An organization called Roma Közösségi Hálózat and several other Roma groups staged a small demonstration in front of the Ministry of Interior after the police refused to investigate the Devecser case. The man who organized the demonstration was Jenő Setét, a Roma activist. There were only about 30 people present, who kept repeating the slogan: “The police shouldn’t assist the Nazis.” The final result was a misdemeanor charge against Setét.

It is my impression that Hungarian policemen, who were somewhat constrained during the socialist-liberal administrations, now feel empowered to act aggressively, sometimes illegally, against ordinary citizens and minorities, especially Gypsies. I have been collecting evidence to prove my point and in the near future will give some examples of what I mean.