Hungarians always complain that foreigners know little or nothing about their country. Well, lately they really can’t complain. Almost a week and a half after Viktor Orbán’s controversial speech the international press is still full of comments on it. Just today I encountered an opinion piece in The Moscow Times which concluded that something is indeed coming from the East “but it’s not the wind. It’s a virus. And with Orbán’s help, this virus has begun to infect the EU.” David Brooks in The York Times described Orbán’s speech as “morbidly fascinating.”

And now here is this effigy story. AP described what happened in Érpatak, a village of about 1,500 inhabitants. Mihály Zoltán Orosz, who has been mayor of the village since 2005, described Israel as “the Jewish terror state” that is trying to “obliterate the Palestinians.” Moreover, he is opposed “to the efforts of Freemason Jews to rule the world.” On the video below you can see a shorter version of the “public execution” where an executioner with a black hood over his face kicks chairs out from under the puppets of Israeli Prime Minister Benjamin Netanyahu and former President Shimon Peres, each tied to a gallows.

The whole scene reminded the journalists of HVG of a medieval macabre show. Who is this man? He is a Jobbik member, but in 2010 when he ran again for the position of mayor of Érpatak he called himself an independent. He is known for his bizarre outfits which are supposed to be traditional Hungarian fare, but they are all terribly exaggerated and therefore ludicrous. He also likes military uniforms. The last time he made quite a splash was at the Budapest gay pride parade where he appeared in a female peasant costume. I am sharing a few of his most “spectacular” outfits.

Of course, a lot of people think that Orosz doesn’t have all his marbles, which is a distinct possibility. But he seems to function quite well and rules the village with an iron fist. Law and order dominate in Érpatak. He calls his “system” the “Érpatak Model,” which he claims is a great success and which should be emulated all over the country. He boasts about the low crime rate, though his critics counter that he exaggerates on that score. And there are some people in the village who are not altogether happy with his activities and the circus he creates around town hall and across the country.

His latest performance might have serious consequences. Israeli Ambassador Ilan Mor immediately expressed his outrage and said that in his opinion “the Hungarian government must act in order to stop these dangerous acts.” The Hungarian foreign ministry got the message. On Monday around noon they issued a statement in which they declared that what happened over the weekend “cannot be reconciled with European norms and with the rule of law. The mayor uses the war and its innocent victims as a pretext for spreading the propaganda of hate.”

How much do we know about Orosz? Not enough, I fear. We know from Professor David Baer’s Testimony concerning the Condition of Religious Freedom in Hungary, submitted to the U.S. Commission on Security and Cooperation in Europe (the Helsinki Commission) on March 18, 2013, that Mihály Orosz “was affiliated with, or the founder of, at least four different groups registered as [bogus] churches.” Indeed, I found the names of three of these bogus churches in a recent article in Gépnarancs: the Order of the Heart of the Sun, Church of the Sophia Perennis, and the Order of the Eye of Heart. 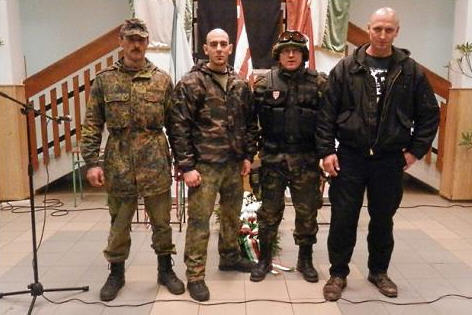 We know that in order to apply for a job in Érpatak’s town hall the applicants have to fill out a form with 165 bizarre questions on politics and everything else under the sun.

Some people believe that it is time to put an end to Orosz’s activities. Among them is Gellért Rajcsányi, a young conservative publicist of Mandiner. He quotes an announcement from Érpatak’s website which calls attention to a demonstration for June 2014 in front of the courthouse in Nyíregyháza. At this demonstration they “symbolically hanged a criminal prosecutor and a criminal judge to show them what will wait for them after their death because of their activities against the world and the nation.” Clearly, Orosz likes to hang those with whom he disagrees. He led a group of people in front of the building that houses TASZ, the Hungarian equivalent of  the American Civil Liberties Union, where they verbally attacked the associates of the organization. The author calls for an end to the career of this wannabe Arturo Ui, a reference to Bertolt Brecht’s play The Resistible Rise of Arturo Ui which chronicles the career of a 1930s Chicago mobster and his attempts to control the cauliflower racket by ruthlessly disposing of the opposition.

Well, the moment might have arrived. Ágnes Vadai in the name of DK urged Peter Polt, the chief prosecutor, to order an investigation. That in itself wouldn’t have prompted Polt to lift a finger, but then Israeli Ambassador Ilan Mor pressed charges because of “the anti-Israeli and anti-Semitic horror show” that took place in Érpatak. Suddenly, the case had international implications that the government and the prosecutor’s office couldn’t quite ignore. The prosecutor’s office in Nyíregyháza began an investigation into the National Network of the Érpatak and the Youth Movement of the Sixty-Four Counties. If Orosz and the other organizers are found guilty they may receive up to three years in jail. I very much doubt, however, that he will spend even one night in jail.