While the opposition papers published scores of articles before and after the European parliamentary discussion in Strasbourg, government organs have been fairly quiet. Of those few articles that did appear in Magyar Nemzet and Magyar Hírlap some were simply personal attacks on European parliamentary members who are in one way or the other connected with the Hungarian case.

Way ahead of the parliamentary debate Magyar Nemzet made certain that its readers know who that horrible Martin Schulz, the president of the European Parliament, is. Where he came from and how he got the top EP job. The article was written by János Boros, a professor of philosophy who made a rather unsavory name for himself as one of the henchmen of the Orbán government involved in the attack against liberal philosophers back in 2011. I wrote about him and the Institute of Philosophy of the Hungarian Academy of Sciences at that time. His new mission was to explain to those unsuspecting Hungarians who don’t read Der Spiegel or any other foreign newspaper that Schulz is a truly despicable character.

A while back Der Spiegel had a spread on the career of  Schulz–from a troubled youth to one of the best known figures in European politics. But while Der Spiegel talked about the road he traveled in admiring terms, Boros finished his article this way: “His first girlfriend, who left him because he was in a drunken stupor too often, today is proud of him. Schulz is also proud of himself. But whom should Europe be proud of? And the European Hungary?” Although the article is not at all original because Boros only quotes a sentence here and a sentence there from Der Spiegel, his choices were intended to show Schulz in the worst possible light.

T. Gyula Máté of Magyar Hírlap wrote an even more tasteless piece on Hannes Swoboda, the leader of the Progressive Alliance of Socialists and Democrats, whom he called “the lapdog of Reding.” He imagined a breakfast meeting with the Hungarian socialist MP Zita Gurmai–Genosse Zita, as Máté called her–who naturally misinforms Swoboda about the Hungarian situation. As if Swoboda needed a lot of outside information. He is an Austrian who is connected to Hungary by family ties. His mother’s family is from Miskolc and he visits Hungary quite often. In any case, according to Máté, Swoboda’s argumentation during the debate clearly showed that Reding’s strategy of courting the socialists and liberals to bolster her candidacy for the presidency of the European Commission is bearing fruit. I might add that Máté misspelled the name of Swoboda as well as Luxembourg throughout. 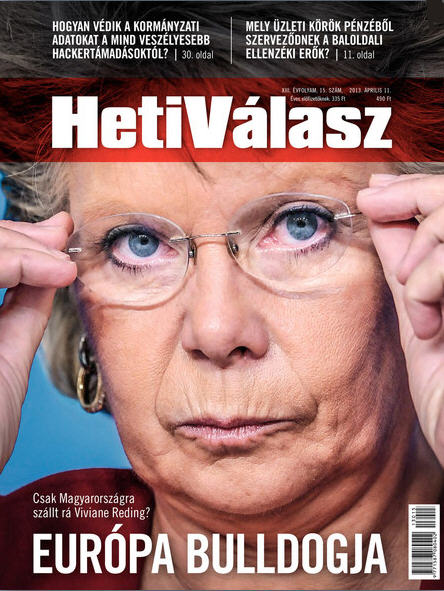 Well, if Swoboda is a lapdog, Reding is a bulldog. At least according to Heti Válasz, a pro-government weekly. A bulldog is considered to be stubbornly persistent. But it seems that Reding is more than that. She is also a schemer, at least according to Magyar Nemzet, who most likely passed on the “lie” about the dissatisfaction of the European People’s Party with Viktor Orbán to Új Magyar Szó, a Hungarian-language paper from Cluj/Kolozsvár. She decided to pick a journalist from a Hungarian paper in Romania to spread the news worldwide!

Another Magyar Nemzet article appeared today under the headline “The left uses the methods of the communist secret police.” This piece of nonsense came from Ágnes Hankiss, a Fidesz member of the European Parliament. In her opinion the very fact that the debate on the “Hungarian question” took place in Strasbourg signifies that the 2014 European parliamentary campaign has already begun. At the center of the campaign is “the weakening of the EPP and the Christian Democratic parties.”  She also immediately addressed a letter to Viviane Reding asking her opinion on the Slovak government’s prohibition of dual citizenship for its Slovak-Hungarian minority. Surely, this is an attempt to prove Reding’s partiality.

I might also mention here that during the parliamentary debate only a Pole from the PiS of Jarosław Kaczyński and Krisztina Morvai of Jobbik defended the Hungarian government. Morvai’s speech is available on YouTube. Judging from the comments, it seems that only Jobbik members and sympathizers have visited the site. Morvai, just like her close friends in Fidesz, lobbed personal attacks on Viviane Reding and Rui Tavares, the chairman of  a parliamentary committee (LIBE) that is in charge of preparing the working documents on the Hungarian case for consideration by the whole parliament.

She declared that since neither Reding nor Tavares has a law degree neither of them is qualified for the job. Moreover, the whole procedure against Hungary is unlawful and “explicitly arbitrary.” It is part of the “European Union’s war against Hungary.”

This is how the Orbán government, its media, and their Jobbik friends are casting the European Union debate. Surely, if they were so confident that their legislative actions would pass scrutiny they wouldn’t have to resort to character assassination. But we shouldn’t be surprised. This is exactly what Fidesz politicians have been doing for almost twenty years. They have plenty of practice.