I wrote about some of the people who received high awards from the Orbán government on March 15, one of the official national holidays in Hungary. They were either racist, antisemitic neo-Nazis or representatives of unscientific, bogus “scholarship” whose numbers have been growing in Hungary in the last twenty years or so. The greatest attention was showered on Ferenc Szaniszló, who received the Táncsics Prize from Zoltán Balog.

I left the story at the point that Zoltán Balog claimed that he knew nothing about Szaniszló’s program on EchoTV. He simply accepted the recommendation of the committee appointed by the Orbán government and made up of right-leaning journalists. Balog also insisted that he couldn’t withdraw the prize. Either Szaniszló gives it back on his own volition or everything remains as is. (I might mention here that when the writer Ákos Kertész made the mistake of saying something derogatory about Hungarians his honorary citizenship of Budapest was withdrawn without the slightest difficulty.) In any case, Balog wrote a letter to Szaniszló in which he practically begged him to return the prize. He did, but only after he delivered another of his harangues on March 18 in an extra edition of Világ-Panoráma. This extra edition was just as long as his other programs, but this time it dealt only with all the indignities he had to suffer from the “szocik” and the “liberok.” One shouldn’t have expected anything else, but at least at the end he announced that he would return the prize–but not to the ministry but to the U.S. Embassy!

Balog might have thought that his troubles were over, but then came the revelation in Heti Válasz, a right-wing, pro-Fidesz publication, that Balog hadn’t told the truth earlier. The committee didn’t recommend Szaniszló for the prize. In fact, as Ágnes Osztovits, who is on the staff of Heti Válasz, revealed, the committee endorsed only one person, a reporter for Magyar Rádió, out of the three who eventually received the awards. In addition to Szaniszló, Márta Ágnes Vertse of Vatikán Rádió was also picked by the ministry against the advice of the nominating committee. Moreover, Heti Válasz learned who promoted Szaniszló and Vertse. None other than the new undersecretary in charge of cultural affairs, János Halász. Balog doesn’t seem to have much luck with his undersecretaries. He couldn’t get along with László L. Simon, who after eight months was fired, and now here is Balog’s own man who immediately gets him into trouble. Both the American and the Israeli embassies officially protested and demanded immediate action in connection with the case.

Szaniszló became an international cause célèbre, although he wasn’t the only one whose recognition by the Hungarian government was questionable. Let’s start with the award of the “Magyar Érdemrend középkeresztje” to Gábor Széles, who is the owner of the very EchoTV that employs Szaniszló in addition to Zsolt Bayer. Széles is also the owner of Magyar Hírlap where Zsolt Bayer is senior editor. Or there is Kornél Bakay, the “archaeologist” who received the “Magyar Érdemrend Tisztikereszt (polgári tagozat)” on March 15. When he was the director of the museum in Szombathely in 2003 Bakay organized an exhibit entitled “Soldiers of Horthy, Arrowmen of Szálasi.” On the basis of this exhibit it became clear that Bakay is “an enthusiastic propagandist of the Szálasi cult.” After a huge outcry the exhibit was dismantled.

The government claims that these awards, decorations, and prizes demonstrate the “Hungarian nation’s recognition of and gratitude to those who represent the best of the nation.” So, let’s see what János Petrás, lead singer of the “nemzeti” rock band, represents because he also received the “Magyar Arany Érdemkereszt (polgári tagozat).” This pride of the nation said at the “Magyar Sziget” neo-Nazi gathering in 2009: “Those people–who are really not human as far as we are concerned–are misfits, inferior somethings. They are gay and they are proud of it….One day this breed will become extinct. They should go somewhere and live together but separately. We will pass a law that will state that we don’t tolerate this perversity.”

It is hard to imagine that all these awards, prizes, and decorations given to people belonging to the far right are simply mistakes. There is a concerted effort to court the Hungarian neo-Nazis. It is government policy. So is the whipping up of nationalist sentiment. 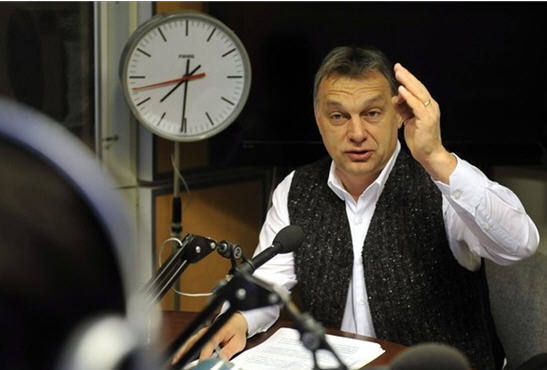 This morning I was reading about Viktor Orbán’s latest Friday morning interview on Magyar Rádió when I noticed something that might be significant. Normally on such an occasion Orbán wears a suit but no tie. This morning it was brisk in Budapest. During the day, around 6°C. At 7:00 a.m. it was most likely close to O°. Yet Orbán appeared in a white shirt with a black vest. An outfit preferred by people who are close to Jobbik or the far right in general. Journalists noted, for example, that Attila Vidnyánszky, the new director of the National Theater, began wearing this type of outfit lately; he seems to have committed his career to creating a truly “national” theater.

I suspect that Orbán’s choice of clothing this morning was a conscious decision to be identified with the Hungarian far right. The outfit was certainly appropriate, given the content of the speech in which he made no bones about his determination not to accept lectures or limits on Hungary’s national sovereignty from Brussels. As one of the headlines in a paper reporting on the speech read, “Orbán: They shouldn’t phone here from Brussels.” And that was before it became known that José Manuel Barroso, president of the European Commission, will in the future personally oversee all contested issues concerning the amendments to the Hungarian constitution. Perhaps it is not only telephone calls that should stop coming from Brussels. What about money?