This year the event was used by employees of cultural organizations, libraries, archives, and related organizations to express their dissatisfaction with the Orbán government’s cultural policies. As we have discussed earlier, education and culture (unless, as the prime minister suggested, sports are part of culture) don’t enjoy governmental support. In fact, with each passing year cultural and educational institutions receive less money. The organizers gathered in front of the National Academy of Sciences, moved on to the Museum of Folklore, from where they went to the ministry of human resources to turn in a petition for higher wages and greater financial resources for education and culture. It was a nice idea, but only a few hundred people showed up. As formerly enthusiastic participants of these demonstrations now believe, too many small demonstrations are actually counterproductive.

The other event that was scheduled to coincide with the Day of Hungarian Culture was the long-awaited public unveiling of the “miracle piano,” a Hungarian invention described by Reuters as a “space-age piano.” A four-man team developed the new piano conceived by Gergely Bogányi, a Hungarian pianist. The piano bears his name. Some experts are enthusiastic about the sound of the “Boganyi” and there seems to be some interest in the Hungarian invention, but no buyer as yet. The piano was financed mostly by money coming from the European Union (New Széchenyi Terv) that gave the developers 217 million forints. The Hungarian National Bank contributed another 60 million. Apparently the four men put 75 million into the project from their own pockets.

Considering the financial involvement of the Hungarian government, it was predictable that Viktor Orbán would deliver a speech in the Ferenc Liszt Academy. In preparation for his arrival the police closed off two whole streets for a day and a half. The prime minister has always been paranoid, but lately his paranoia has become outright pathological.

In the speech he “with due modesty but with pride” pointed out the number of “cultural sanctuaries” that his government either built or renovated. What he neglected to mention was that all of the projects, like the Ferenc Liszt Academy where the gala performance took place, were financed with EU money. He described culture as “the thread that weaves together parts of the nation that drifted to or were torn away to different parts of the globe.” Somehow he must talk about the unification of the nation across borders. A space-age piano is good enough reason.

According to Orbán, “in this miracle piano there is everything that characterizes the Hungarians: ceaseless entrepreneurial spirit, inventiveness, a restlessness of the Hungarian spirit that strives for perfection and is never satisfied with what exists at the present.” I guess all that with “due modesty.” 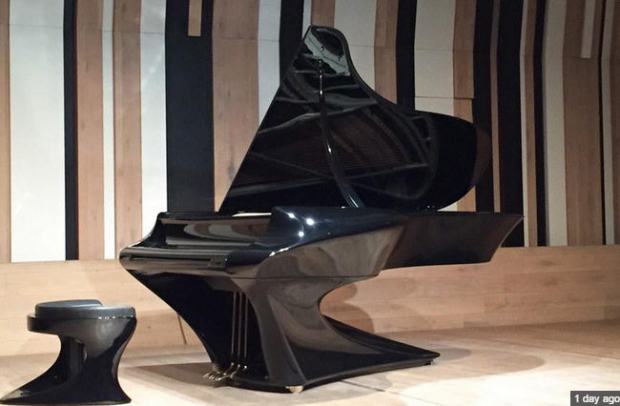 Most of the speech was the usual fluff, but there were a couple of sentences that were particularly objectionable. He talked about “our greatest scientists, Ede Teller, Jenő Wigner or János Neumann who were born and went to school in Budapest but somehow (valahogy) could not make good use of their knowledge in Hungary.” Somehow? All three were of Jewish background and all three left Hungary in the 1920s. They ended up first in Germany and later, after Hitler’s rise to power, came to the United States. Their reasons for leaving Hungary were diverse, but they were a combination of the anti-Jewish numerus clausus law that severely limited the number of Jewish students in Hungarian universities, the general anti-Semitism prevalent in Hungary, and the superiority of German universities over Hungarian institutions. This constellation of reasons for young people to leave Hungary is not so different today. A lot of Hungarian Jews don’t feel at home in Orbán’s Hungary, and if a bright Hungarian student has the choice, he/she will choose a British, American, or German university over the domestic fare.

It is one thing to build or renovate concert halls, museums, or theaters, and another matter to have a cultural policy that fairly distributes resources among worthy recipients: writers, musicians, filmmakers, and artists. What is going on in Hungary is a “Kulturkampf” that aims at, on the one hand, rewriting the history of all facets of cultural endeavor and, on the other, creating a set of favored contemporary writers and artists. A good example of the latter is the establishment of a new academy of the arts that is now enshrined in the constitution itself. Its members are recruited from a group of artists in sympathy with the current regime and, as a gift for their loyalty, they receive generous annuities. As for the rewriting of the history of Hungarian literature, we have seen many cases where extreme right-wing writers of modest talents are dredged up from the period between the two world wars and elevated to the ranks of the Hungarian literary greats.

Just the other day I heard an incredible story from György Konrád, the well-known writer. He and his family live near Tapolca, a town in Veszprém County. Konrád often visits a small local library named after János Batsányi, a poet and philosopher, who was born in Tapolca in 1763. He was a radical who was an admirer of the French revolution and later of Napoleon, whom he followed to Paris. After the emperor’s fall he was taken back to Vienna and thrown into jail. He is considered to be one of the most radical representatives of the ideas of the Enlightenment in Hungary.

Well, a few days ago Konrád paid a visit to the library and what did he find? The library was renamed the Elemér Vass Library. Elemér Vass was a relatively minor painter about whom few people know anything, while everybody who ever went to high school can recite Batsányi’s warning to the Hungarian nobility:  “Cast your eyes toward Paris!” Perhaps it was the Enlightenment that bothered the local potentates. Hungarian libraries, it seems, are not meant to enlighten but to indoctrinate.

Sometime either at the end of the 1970s or early in the 1980s I had a visitor from Hungary, a middle-aged historian whom I would never have guessed would be an ardent fan of rock music. Yet she brought an album by a Hungarian rock group as a gift. The group was considered to be a significant anti-government voice; it was linked to Levente Szörényi and János Bródy, later composer and lyricist of István, a király (Stephen, the King).

It was in 1983 that István, a király, a rock opera, was first performed in Budapest’s city park (Városliget). It was an immediate hit. Today it is described as a “cultic” and “legendary” work that was intellectually and politically influential in the years following its first performance.

The story deals with the dynastic struggle between Stephen and his uncle Koppány and, through their struggle, with the transformation of late tenth- and early eleventh-century Hungarian society.

During the communist period it was customary to “read between the lines,” and to the popular mind Stephen’s story soon became an allegory of recent Hungarian history. To many Stephen was János Kádár, who realized that the country cannot go against the Soviet Union and the neighboring socialist countries, while Koppány was viewed as Imre Nagy, who represented the true Hungary and who at the end fell victim to outside forces.

In the years since the first performance of István, a király it became a favorite of the Hungarian right, especially since a few years ago a film based on the opera was released. The film’s director specializes in nationalistic productions of historical topics. Meanwhile Szörényi became politically identified with the right and Bródy with the left. So, when the thirtieth anniversary rolled around and the idea of restaging István, a  király came up, it was completely unexpected that Bródy and Szörényi not only got together but chose Róbert Alföldi to direct an entirely new production of their opera.

Alföldi is known for his avant garde productions. Both his political views and his artistic philosophy are anathema to the Orbán government. It was only recently that in a clearly rigged competition he lost his bid for a renewal of his appointment as the director of the National Theater. Szörényi, who recently expressed his misgivings about the Orbánite Kulturkampf, is a good enough artist to know that Alföldi’s talent and his opera might be a winning combination.

Szörényi and Bródy insisted that the new performance not be “historically accurate,” i.e. Stephen and his entourage shouldn’t be wandering around in late tenth-century costumes but should depict modern men and women. The Bavarian soldiers accompanying Gizella en route to becoming the bride of Stephen should be members of modern army, police, and anti-terrorist units. So, those who now object to the modern setting and blame Alföldi’s directing style are unfair. The authors of the opera wanted the modern setting. They had only one demand: Alföldi shouldn’t touch the lyrics or the music. Apparently, he didn’t.

The new production of the rock opera was performed in Szeged in an open air theater where most of the time around 200 people were on stage. On August 20th RTL Club showed it live on television. Just as in 1983, critics found symbolism in the new István, a király. Right wingers are convinced that Stephen is a caricature of Viktor Orbán. They also greatly object to Alföldi’s portrayal of the Catholic Church. One critic claimed that István, a király is perhaps the most “anticlerical” performance ever put on a Hungarian stage. The nationalists vehemently object to Stephen’s depiction who in Alföldi’s interpretation looks like a less than resolute leader who doesn’t even have a great desire to be king; he is under the thumb of his strong-willed mother, Sarolt. The view of Stephen as a king who manages to win over his domestic enemies only with foreign help doesn’t quite fit the historical picture most Hungarians have of their saintly king.

Meanwhile, Alföldi, who has given a couple of interviews in the last few days, claims that what he did was nothing more than depict true historic fact. He tried to get rid of the nationalistic pathos and the unhistorical interpretations that falsify history. Up to a point he is right, but surely the interpretation reflects Alföldi’s own worldview. When two bards arrive in an old Trabant, the message is clear: these two guys in their fifties with their old Trabant represent the past while Gizella’s silver Mercedes, which brings her from Bavaria, is the future. Which is the more attractive? I don’t think we get a clear answer. With that Mercedes also come soldiers, policemen, and commandos without whom the state couldn’t be maintained. Survival has a price.

The most controversial prop is a huge rusty crown into which eventually the people of the realm are herded. The cage-like structure is shut. There is no escape. Eventually, in the last moments of the play, the people inside begin to sing the national anthem, an act that jolted quite a few of the conservative and nationalistic critics. 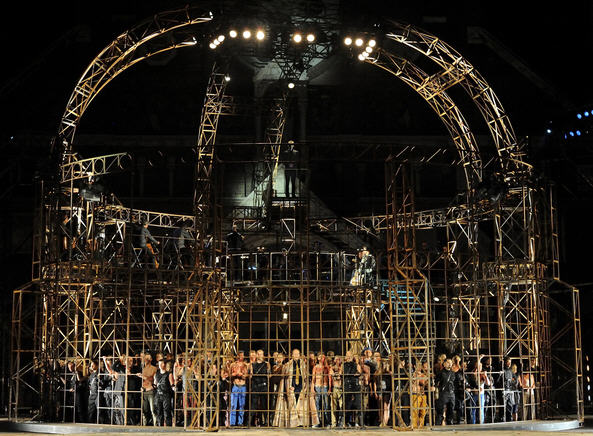 The rusty crown-cage of Róbert Alföldi’s rendition of István, a király

Yes, the performance is controversial but still 750,000 people watched it on television.  MTV at the same time aired a lesser known Ferenc Erkel opera called István király in which relatively few people were interested. I think that the official state television’s choice says a lot about the cultural preferences of the present government. A safe nineteenth-century historical opera that practically nobody wants to see.

In addition to the 750,000 people who watched the opera on television, the three performances in Szeged were sold out. It seems that the history of those turbulent years at the crossroads between the old and the new still has relevance today. But Viktor Orbán is not Stephen. If anything, he is Koppány.