The great day is coming. Monday, which is a holiday in Hungary, will not be about the resurrection of Jesus Christ but about the resurrection of Hungarian football. I’m not kidding. This is what György Szöllősi, communication director of the Puskás Academy, said to the hundreds of reporters who showed up for the first tour of the facilities of the Pancho Arena. Why Pancho Arena? Because, as we just learned, this is what the Spaniards called Ferenc Puskás when he was playing for Real Madrid. Mind you, in Hungary everybody knew him as Öcsi Puskás (“öcsi” means younger brother or a really young boy in Hungarian). And while we are on the subject of names, Puskás’s family name until he was ten years old was Purczeld. Yes, one of the Mighty Magyars was of German extraction, a descendant of one of the many German immigrants who settled in Hungary in the early eighteenth century.

I guess the creators of the Pancho Arena in Felcsút, a Hungarian village about 40 km from Budapest, decided on the name because Viktor Orbán, who was already working on making a national superhero out of Ferenc Puskás, decided during his first premiership to name the old Népstadion (built between 1948 and 1952)  after the football legend. So, the Puskás name was already taken. Thus they had to settle for a name that isn’t terribly familiar to Hungarians.

I doubt that Puskás in his youth ever heard of this village. His favorite town was Kispest, where he started to play football. Kispest was a separate town until 1950, when it was incorporated into greater Budapest. Nonetheless, Orbán managed to get all “the Puskás treasures” in the possession of the Puskás family to Felcsút, where the prime minister spent part of his childhood and where he built a weekend house a few years ago. These “treasures,” which include old jerseys, pictures, trophies and other memorabilia, will be on permanent display in the halls of the stadium. Daily guided tours will be available to all who would like to see this “sanctuary” to Ferenc Puskás and football. The description of the arena as a sanctuary also comes from the Academy’s communication director.

The sports reporters were clearly in awe of the excellent conditions created in Felcsút for the sport. I’m also sure that they are looking forward to reporting from the press box equipped with all the latest marvels of modern technology. They lauded the turf that is being watered and heated from below ground.

Journalists who deal with political matters were less enthusiastic. They made sarcastic remarks about the man who is able to satisfy all his whims because of his position of power. They can’t quite get over the fact that such a large and ostentatious stadium, which will be able to seat 3,600, is being built in a village of 1,800 people. Index calculated that each individual inhabitant of Felcsút received 3.77 million “football” forints. One old peasant woman who was interviewed kept emphasizing that the erection of such a stadium is a real joy for the Felcsútians because “after all, the building will remain here.” But this is exactly what worries the critics. What will happen whenViktor Orbán is no longer the prime minister or when he is no longer, period? What will happen to this stadium? The same thing that happened to the one Nicolae Ceaușescu built in his birth place, the village of Scornicesti, which now stands empty and crumbling? Moreover, what can one say about the leader of an allegedly democratic country who allows a football stadium that is supposed to be an exhibition piece to be built in his backyard? Indeed, a valid comparison can be made between the Romanian dictator and Viktor Orbán. This is what a blogger was alluding to when he gave this title to his post on the stadium: “Santiago Orbaneu: Ilyen lett a felcsúti stadion.” (This is how the stadium in Felcsút turned out.) 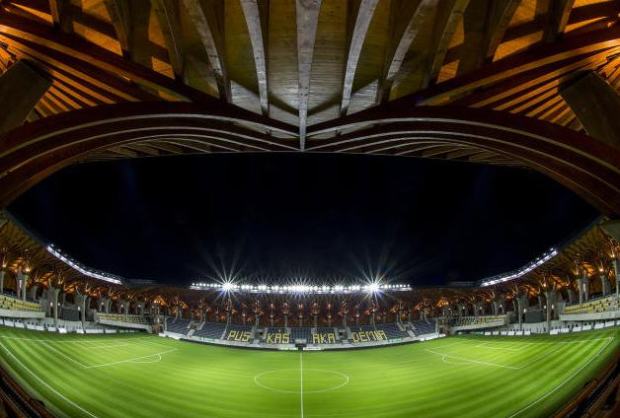 There are several boxes, complete with I assume well-stocked bars for those who either “deserve them” or can afford them. One box belongs to Viktor Orbán and his guests. The plaque next to the door reads: “The prime minister’s office.” That aroused the interest of the journalists, but it turned out that the plaque is somewhat misleading. It is the private box of the founder of the Puskás Academy, Viktor Orbán. It will be his as long as he lives. Another box is designated for “local entrepreneurs.” I guess it is reserved for Viktor Orbán’s front men in Felcsút.

In the VIP section the seats are apparently made out of real leather, and the lucky ones who sit there can watch game replays in slow motion on monitors attached to the backs of chairs in front of them. I’m not sure how well these leather chairs will stand up to nature’s vicissitudes and the inevitable stains. 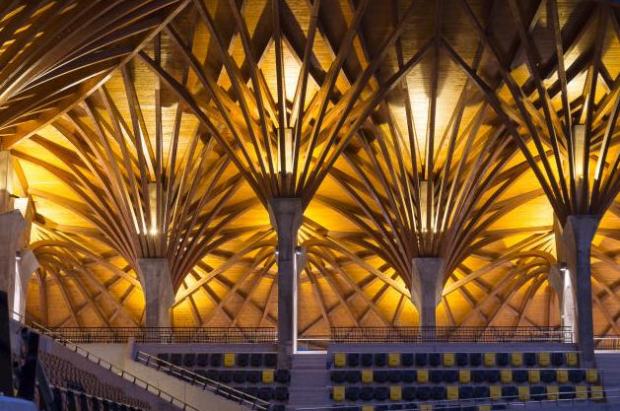 The elaborate wooden structure will also be difficult to keep in tip-top shape. And the copper roofs in no time will tarnish. In brief, the upkeep of the structure will be enormous. What will happen if the flow of money that is coming in now due to the founder’s position stops? Because, although perhaps Viktor Orbán doesn’t want to face the fact, financial supporters of his hobby will drop him once he is no longer of use to them. Once Viktor Orbán is out of office–because it will happen one day regardless of what some pessimistic people say–I doubt that a new Hungarian government will pick up the tab. 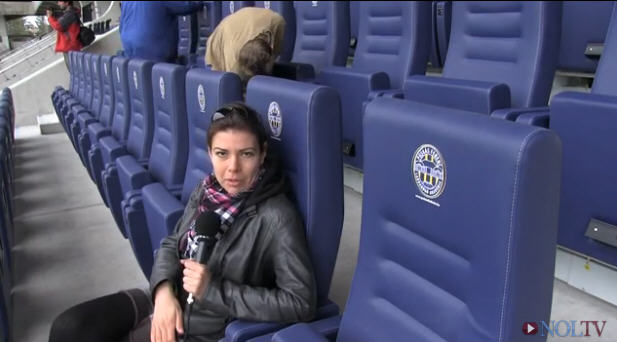 On Monday at the opening ceremony there will be the usual speeches. Two of the stars of the show will be former president Pál Schmitt, an Olympic champion and member of the International Olympic Committee, and Ángel Maria Villar, president of the Spanish Football Association and vice president of the Fédération Internationale de Football Association. The former had to resign in disgrace because of plagiarism and the latter’s reputation is marred by his possible involvement in corruption cases. What a pair!

The communication director of the Puskás Academy admitted that decent people no longer go to watch football, but he predicted that “on Monday the change of regime of Hungarian football will begin.” Critics of Orbán’s football mania very much doubt it. They consider every penny spent on stadiums a waste of limited resources. And the stadium at Felcsút a disgrace that speaks volumes about Viktor Orbán and the regime he has built.